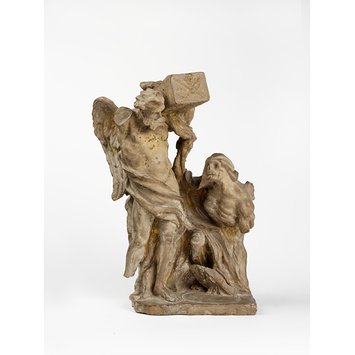 This terracotta model of Time and Death is probably by Gianlorenzo Bernini (1598-1680), the leading Baroque sculptor in Rome. Modelled originally in the malleable material of clay, which has been fired to become terracotta, it still bears the imprint of the maker's touch and tools, with the back peppered with fingerprints. Models of this kind allowed sculptors to work out their compositions in three dimensions. As clay is fragile, the sketches were often fired to keep them in the studio, but they had already become sought by collectors during the sixteenth century as evidence of the artist's creative process.

This model, which shows Time dominating the skeletal figure of Death, conveys the message that the passage of time confirms the immortality of the deceased's reputation through fame (or of their soul through redemption). Here, Time raises the coffin out of Death's reach, thus cheating him of his prize. Death's missing arm was apparently holding open the lid of a catacomb, or underground burial chamber, the entrance of which is suggested by the circle roughly incised on the ground. Death appears to emerge from the ground itself, his skeletal form half decomposed and otherworldly. He effectively meet's Time's gaze, signalling a silent communication in which he must admit defeat. Nevertheless, he retains a tight grip on the shroud, with muscles tensed - a last desperate attempt to seize the coffin. Time and Death are commonly found in contemporary Roman tombs, where they appear more or less interchangeably as reminders of mortality. While this piece confirms the triumph of immortality, it equally provides a reminder of the omnipresence and inevitability of death.

The sculptor, most likely Bernini himself, retains the traditional depiction of 'Father Time', while lifting from the classical imagery in the representation of a muscular torso and flowing hair, reminiscent of figures such as the Laocoön and the Greek gods. The suggested movement of Time's mantle, which snakes around his body, combined with the upward thrust of his torso and arms, creates a dynamism that is typical of Bernini's sculpture. Similarly, the heightened dramatisation of the scene characterises the theatricality of Baroque art.

The winged bearded figure of Time carries a coffin aloft over his left shoulder. Death, also winged, a skeletal figure, kneeling on his left knee, seizes Time's mantle. The model is rough at the back. Traces of gilding are evident on the body and mantle of Time, and on the drapery round Death.

Terracotta, with traces of gilding

The sculpture was first published in 1900 (Franschetti, p.256), where it was identified as a typical Bernini sketch. In its construction and treatment, this terracotta compares closely to Bernini's authenticated clay sketch-models, notably the roughly-worked back which bears numerous finger-prints of the maker - see models for the Angels for the Ponte Sant'Angelo (see Bruce Boucher (ed.), Earth and Fire. Italian Terracotta Sculpture from Donatello to Canova. [exh. cat. The Museum of Fine Arts, Houston; V&A, London], New Haven and London: Yale University Press, 2002, for example, pp. 63, 196, 197).

The theme of death was one of Bernini's abiding obsessions and featured extensively in his work. This was fuelled also by the concerns of his papal patron, Pope Alexander VIII, who had previously commissioned a skull and coffin from Bernini for his bedchamber to remind him of his mortality (Avery 1997, p.130). This sculpture was connected with Bernini's obsession by Mariani (op. cit.) and the model was mentioned briefly by Wittkower (op. cit.) in his monograph on Bernini, where he apparently accepts its authenticity.

The design of this model suggests that it was made in connection with a wall tomb or for a temporary, and therefore ephemeral funeral decoration, such as a catafalque. There are extremely close analogies with the figures of Time and Death on Bernini's catafalque for the funeral of the Duc de Beaufort in Rome in 1669 where animated, winged skeletans support the funeral pyramid (Avery 1997, p.132).

From the collection of the neoclassical sculptor Adamo Tadolini in Rome, then by descent to his great-grandson, the sculptor Enrice Tadolini. Placed on sale at Christie's, 20 June 1983, lot 45, and subsequently acquired by the Museum.

TIME AND DEATH
Italian (Rome); about 1670
Terracotta with traces of gilding
Ascribed to Gianlorenzo Bernini (1598-1680)

This is possibly a sketch model for a wall tomb or for a temporary funeral decoration (or catafalque). Here time, supporting a coffin on his shoulders, is shown lifting the body of the deceased out of the reach of Death, who grabs the shroud. Death’s missing arm seems to have been holding open the lid of a catacomb (or underground burial chamber). Time cheats Death of his prize by making the deceased immortal, either through fame and reputation or through redemption of the soul.
[1993 - 2011] 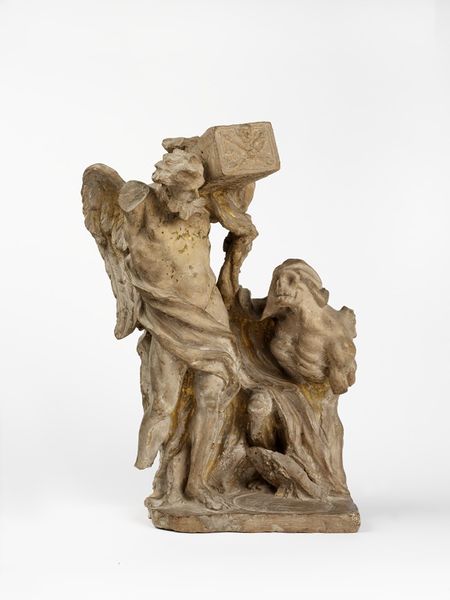