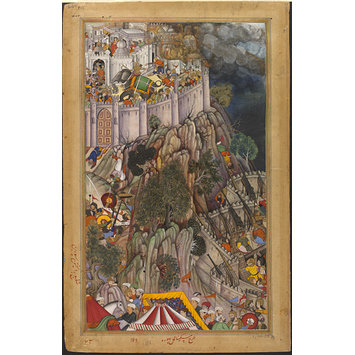 This painting is an illustration from the Akbarnama depicts the Mughal army led by the emperor Akbar, besieging Rai Surjan Hada's fort of Ranthambhor in Rajasthan, in 1569.

The Akbarnama was commissioned by the emperor Akbar as the official chronicle of his reign. It was written by his court historian and biographer Abu'l Fazl between 1590 and 1596 and is thought to have been illustrated between about 1592 and 1594 by at least 49 different artists from Akbar's studio. After Akbar's death in 1605, the manuscript remained in the library of his son, Jahangir (r. 1605-1627) and later Shah Jahan (r.1628-1658). The Victoria and Albert Museum purchased it in 1896 from Mrs Frances Clarke, the widow of Major-General John Clarke, who bought it in India while serving as Commissioner of Oudh between 1858 and 1862.

Painting, in opaque watercolour and gold on paper, Mughal gun emplacements are at bottom right of the painting, and aim upwards to the fortress of Ranthambhor, perched on top of a rocky outcrop, at top left. Flames shoot from the buildings within the fort's walls and the sky is black with smoke. A tree grows from rocks at the centre of the bottom half of the composition, and soldiers mass to its left, ready to advance on the fort.

'Tarh Miskina/amal Bhura'
'Composition by Miskina/Work [ie painting] by Bhura'
These are the attributions of a contemporary librarian, written in red ink in the margin beneath the painting.

The Akbarnama was commissioned by the emperor Akbar in 1589 as the official chronicle of his reign. It was written by Abu'l Fazl who completed his work in 1596. Artists of the royal studio worked on the illustrations as the writing was being revised. After Akbar's death in 1605, the manuscript remained in the library of his son, Jahangir (r. 1605-27) and was later inherited by Shah Jahan (r. 1628-58). The manuscript was purchased by the museum in 1896 from Mrs Frances Clarke, the widow of Major-General John Clarke, who had bought it while serving as Commissioner of Oudh, India, between 1858 and 1862.

Historical significance: This is thought to be the earliest illustrated copy of the Akbarnama. It drew upon the expertise of some of the best royal painters of the time, many of whom receive special mention by Abu'l Fazl in the third volume of the Akbarnama, the A'in-i-Akbari.

Outline painted by Miskina, colours and details painted by Bhura.
Attribution place is likely to be Delhi, Agra or Fatehpur Sikri. 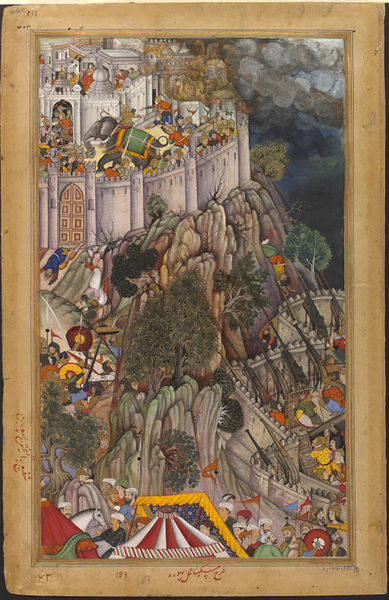