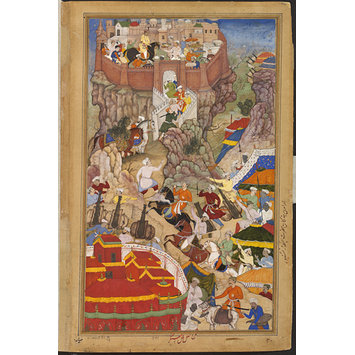 Akbar's entry into the fort of Ranthambhor

The Mughal emperor Akbar himself directed the attack of the imperial forces on the Rajput fortress of Ranthambhor. He appointed Qasem Khan and the Hindu Raja Todar Mal to construct sabats, or covered ways, so that the artillery could be brought close to the walls. The recently developed tactic was successful: ‘At every discharge there was a reverberation in the mountain, the ears of the solid rocks were opened, and there was a breach in the walls of the fort and the houses went to dust’, wrote Abu'l Fazl, the author of the Akbarnama. The fort’s governor, Raja Surjan Hara, sued for peace, and the keys were handed to Akbar who entered it the next day. Abu'l Fazl notes that the only other Muslim conqueror of Ranthambhor, Al’a ad-Din Khalji, had taken a year to achieve in 1303 what Akbar's forces accomplished in a month. Raja Surjan subsequently entered Mughal service, and Rajasthani annals record that he and his companions were given many privileges, including the right to carry arms in Akbar’s Hall of Audience.
La’l, who designed the composition, produced others in the V&A manuscript and was clearly one of the leading artists of the reign. Here, he depicts the fort in a stylized manner that contrasts with the European influence apparent in the naturalistic treatment of the background, where a city is seen in the misty blue tones of distant Western landscapes. [Akbarnama, English translation: Beveridge, vol. II, pp. 493-97]

The Akbarnama was written by his court historian and biographer Abu'l Fazl between 1590 and 1596 and the paintings were being made as he wrote the text. In 1896, the Museum purchased the partial text with 116 illustrations of this copy almost certainly made for presentation to the emperor, from Mrs Frances Clarke, the widow of Major-General John Clarke, who bought it in India while serving as Commissioner of Oudh between 1858 and 1862.

Painted in opaque watercolour and gold on paper, Akbar's entry into the fort of Ranthambhor after the submission of Rai Surjan Hada, 1568.

'tarh La'l /amal Shankar'
'Composition by La'l/Painted by Shankar'
Contemporary attribution in Persian, written in red ink in margin below the picture.

The Akbarnama was commissioned by the emperor Akbar in 1589 as the official chronicle of his reign. It was written by his court historian and biographer Abu'l Fazl between 1590 and 1596 and is thought to have been illustrated between c. 1592 and 1594 by at least forty-nine different artists from Akbar's studio. After Akbar's death in 1605, the manuscript remained in the library of his son, Jahangir (r. 1605-1627) and later Shah Jahan (r. 1628-1658). The Victoria and Albert Museum purchased it in 1896 from Mrs Frances Clarke, the widow of Major-General John Clarke, who bought it in India while serving as Commissioner of Oudh between 1858 and 1862.

Painting, Akbarnama, Akbar's entry into the fort of Ranthambhor, outline by La'l, painting by Shankar, opaque watercolour and gold on paper, Mughal, ca. 1586-1589

Composition by La'l, colours and details painted by Shankar. 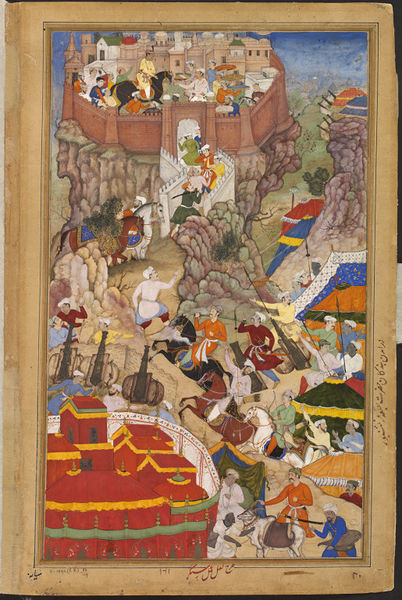