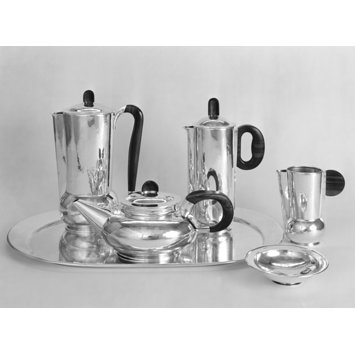 Christian Dell (1893-1974) was one of the designers who played a formative role in shaping the Bauhaus style. Before going to the Bauhaus in Weimer in 1922, Christian Dell served an exacting apprenticeship as a silversmith, spending the years 1907-12 at the Schleissner & Söhne silver factory in Hanau as an apprentice while studying at the "Königlich Preußischen Zeichenakademie" in Hanau. In 1913 Christian Dell worked as a silversmith in Dresden before going to the "Kunstgewerbeschule" in Weimar, where he met Henry van de Velde.

Then Dell returned to Hanau and reenrolled at the "Preußische Zeichenakademie". From 1922 until 1925 Christian Dell was a works master in the metalworking workshop at the "Bauhaus" in Weimar, where he collaborated closely with László Moholy-Nagy and produced numerous designs for office and workplace metal light fittings.

From 1926 until he was dismissed from his post by the National Socialists, Christian Dell was head of the metalworking workshop at the "Frankfurter Kunstschule". There he designed a great deal of lighting, including the "Rondella-Polo" (1926-27) table lamp and the "Idell" range, which was mass produced mainly by Kaiser & Co., Rondella, and, later, also by Bünte & Remmler.

Coffee pot with walnut knop and handle. Part of a service. The body of the pot consists of a tall funnel (oval in cross section) set upon a bulging oval shaped base; a narrow shaft runs down one side of the funnel with a small spout st its top. A slightly domed lid is hinged on one side; it has a walnut knop like a crescent shaped half dome, convex on one side and concave on the other. The long curved handle is of walnut and is joined to the body by two shafts of silver.

From a tea and coffee service. Dell served his apprenticeship in Hanau before working as a silversmith in Dresden while being trained at the Kunstgewerbeschule under Henri Van de Velde. After military service in the first world war, he worked for Emil Lettré in Berlin before joining the Bauhaus in 1922 where he was head of the metal workshop until 1925, working closely with Lásló Moholy-Nagy. Unlike many of his Bauhaus colleagues, he did not reject historicism entirely and yet nonetheless, his silver during his period at the Bauhaus is strongly geometrical in character. From 1926 until 1933, he taught at the Frankfurt Art School as well as design several light fittings for industrial mass production. He was removed from his teaching post in 1933 by the Nazi government and later set up his own jewellery business in Wiesbaden. 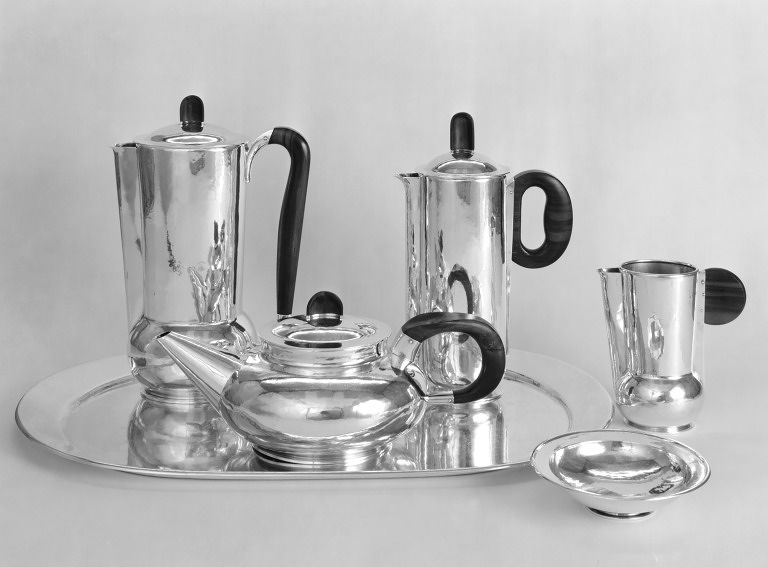