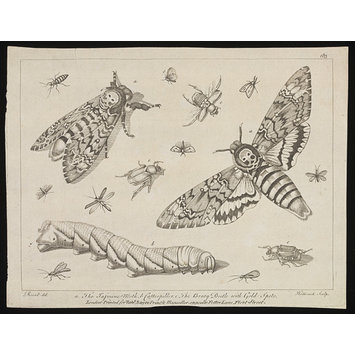 Lettered illustrations of two moths, a caterpillar and two beetles. Labelled as: The Tafmine Moth; Catterpiller; The Brasy Beetle with Gold Spots.
The caterpillar is viewed almost in profile in the lower-left corner of the image.'The Tafmine Moth' ( a Death's-Head Hawkmoth) and 'The Brasy Beetle with Gold Spots' (a Brassy Beetle) are both depicted twice: the moth is shown once with its wings closed and again with them open; the beetle is shown at two slightly different angles.
The lettered illustrations are surrounded by ten much smaller images of various insects.

'a. The Tafmine Moth. b Catterpiller, c The Brasy Beetle with Gold Spots,'
Key to illustrations, central below image.

The paper is watermarked.

'Rosel, del.' is lettered in the lower-left corner of the sheet. This probably refers to Franz Rösel von Rosenhof, a German landscapist and animal painter (1626-1700).

'Homerich, Sculp' is lettered in the lower-right corner of the sheet. This could refer to either:
Cornelius Heinrich Hemmerich, an engraver who specialised in natural history subjects and was active in the second half of the 18th century. 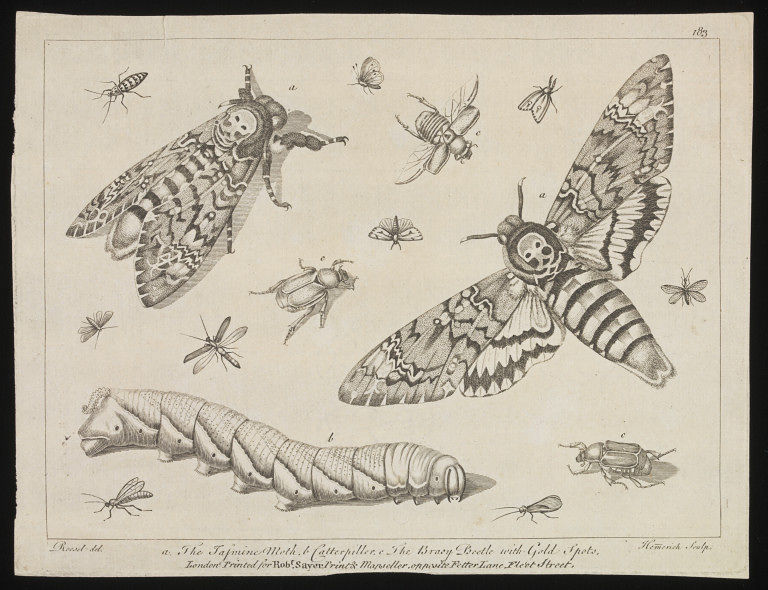