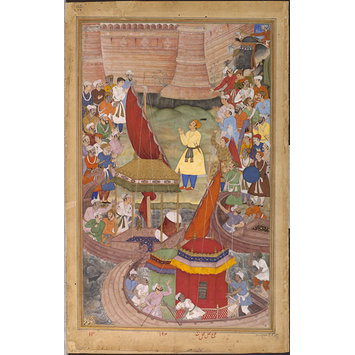 This is an illustration to the official history of the reign of the Mughal emperor Akbar (r.1556–1605) entitled the Akbarnama (Book of Akbar). The history was commissioned by Akbar in 1589 and written in Persian, the language of the court, by the great scholar Abu'l Fazl. He completed most of his work by 1596, and the paintings were done as he wrote and revised his text.
The painting depicts an event from the year 1576. Bengal was a province in the eastern part of the empire, far from the centre of power. In this year, a new ruler called Daud Khan defied Akbar ’s authority. The emperor launched a major campaign against Daud and his Afghan supporters, leading the army eastwards to attack them at the city of Patna. The city fell, and the Mughals took its considerable treasure, including gold, armour and 265 magnificent elephants. Daud fled, and Akbar returned to Fatehpur, leaving his army in pursuit of the rebel and his forces. A protracted series of confrontations and even a temporary rapprochement failed to subdue Bengal. In July 1576, despite it being the height of the rainy season, Akbar decided to lead the campaign once more. The emperor and his reinforcements had progressed only a short distance from Fatehpur when a messenger suddenly appeared in the royal encampment, bringing the surprising news of a decisive Mughal victory. As proof, he threw Daud’s severed head before the emperor. Akbar’s rule was thereafter re-established in the cities of Bengal, but the administration of the province was never as settled as that of others in the empire.
[Akbarnama, English translation: vol.III, pp. 140-153; 169-180; 248-50]
The V&A’s partial copy of the Akbarnama is thought to have been illustrated between about 1590 and 1595. This is thought to be the earliest illustrated version of the text, and drew upon the expertise of some of the leading court artists of the age. Many of these are listed by Abu’l Fazl in the third volume of hjs text, the A’in-i Akbari/ Their names, written in red ink beneath the pictures by a librarian, demonstrate that this was a copy made for Akbar himself. After his death, the manuscript remained in the library of his son Jahangir, from whom it was inherited by Shah Jahan.

Painting, in opaque watercolour and gold on paper, Akbar praying on receiving news of victory in Bengal in 1572, while proceeding up the Indus. Akbar is shown in the center of the image dressed in blue and pale yellow. In the foreground, several boats are shown. A crowd of courtiers stand on the banks of the river.

'Tarh: Lal/amal: Nand'
'composition by Lal/work [= painting] by Nand'
Contemporary librarian's attribution in Persian written beneath the image at the bottom of the page in red ink.

The Akbarnama was commissioned in 1589 by the emperor Akbar as an official chronicle of his reign. It was written by his court historian and biographer Abu'l Fazl around 1590, and illustrated during the same decade by at least forty-nine different artists from Akbar's studio. After Akbar's death, the manuscript remained in the library of his son, Jahangir. The Victoria and Albert Museum purchased it in 1896 from the widow of Major General Clarke, an official who served as the Commissioner in Oudh province. 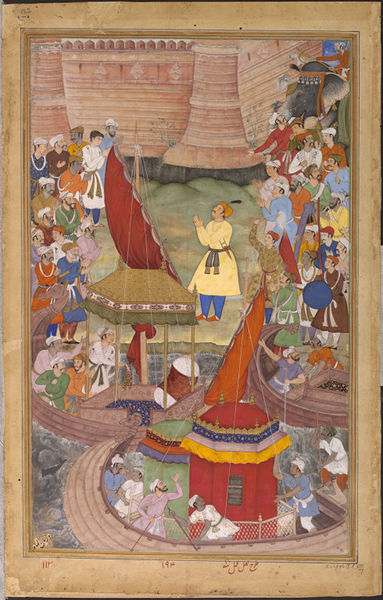