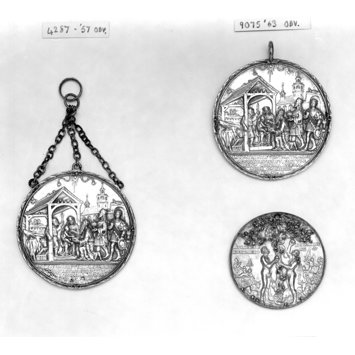 The Adoration of the Magi

This medallion with ring is made by Hans Reinahrt the Elder in Germany in 1538.

Hans Reinhart the Elder (ca. 1500/10 - 1581) was a German goldsmith and medallist working for the Court of Saxony in Dresden.
Reinhart's medals, mainly produced between 1535 and 1545, were marked with his initials hr.
It is worth mentioning that he cast his medals from wooden models and not, as was usual in goldsmith work from stone models. His work as medallist is not extensive, Habich lists fewer than 50 medals.

Medallion with suspension ring depicts: Obv.: Adoration of the Magi. In the background on the left, the shepherds. On the right, a church and the entrance to a town, a peacock perched on the archway. Wreathed border. 'INVENERVNT.PVERVM.CVM.MARIA / ADORAVERVNT.ET.OBTVLE / RVNT.MVNERA.AVRVM. /THVS.ET.MIRRA' / * .MAT.II. *'. On the border between the exergue and the Adoration of the Magi the remains of the date: M D X X X VIII. Signed on the manger: HR
Rev: Moses and the Burning Bush. On the ground, left, a snake. Right: a flock of sheep with a dog under a tree. 'DOMINVS.MOYSI.DE.RVBRO/LOQVITVR.ET.IN.EGIPTVM / MITTIT. AD.PHARONEM / * EXOD.III. *'

'INVENERVNT.PVERVM.CVM.MARIA / ADORAVERVNT.ET.OBTVLE / RVNT.MVNERA.AVRVM. /THVS.ET.MIRRA' / * .MAT.II. *'
They saw the young child with Mary his mother, and they fell down, and worshipped him: and when they had opened their treasures they presented unto him gifts; gold, and frankincense and myrrh. Matthew 2.
Latin; Obverse

Remains of the date 'M D X X X VIII'
Obverse, on the border between the exergue and the picture

'HR'
Signature; Obverse, on the manger

'DOMINVS.MOYSI.DE.RVBRO/LOQVITVR.ET.IN.EGIPTVM / MITTIT. AD.PHARONEM / * EXOD.III. *'
The Lord spoke to Moses from the bush and sent him to the Pharaoh in Egypt. Exodus 3
Latin; Reverse

Medal, silver gilt, The Adoration of the Magi or Moses and the Burning bush, by Hans Reinhart the Elder, Germany, dated 1538. 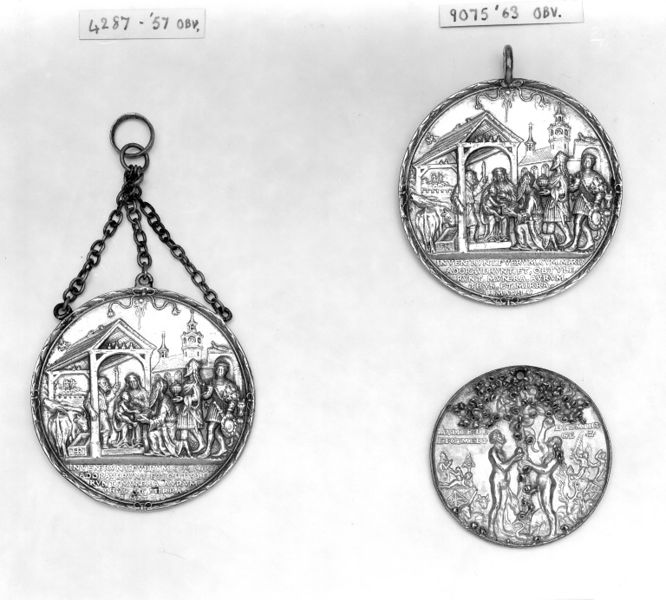