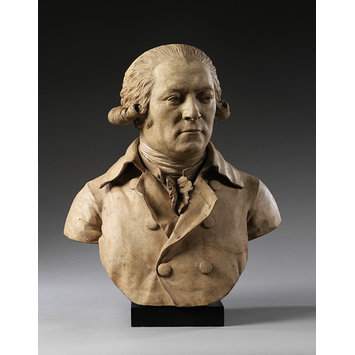 This man represented by this terracotta bust has not yet been identified although it is a signed and dated (June 1786) work. He wears a periwig, the queue tied with a ribbon. His broad collared coat shows three buttons on each side. Above the lapels are visible a lace frill and the collar of a waistcoat. The neck is bound with a stock.

Bust of a man in terracotta. The subject, an unknown man, looks half left. He wears a periwig, the queue tied with a ribbon. His broad collared coat shows three buttons on each side. Above the lapels are visible a lace frill and the collar of a waistcoat. The neck is bound with a stock.

Par Merard En Juin 1786
on the back, just above the truncation, on the left.

The subject of this bust has not been identified.

Historical significance: Pierre Merard (? - 1800) was a pupil of Bouchardon. Received by the Academie de S. Luc in 1763, he exhibited in the Salon de S. Luc in 1774 and in the Salons of the Louvre of 1795, 1796 and 1799. He died in 1800. His recorded work largely consists of busts and portrait medallions. He is best known for his bust of the Prince of Conti, of which the terracotta (signed October 1776) is in the Museum at Dijon. Versailles possesses a plaster. Two marbles exist, both dated 1777 (one belongs to Duchesse de Rohan, Chateau de Josselin, Brittany, the whereabouts of the other is unknown - information supplied in letter to Sculpture Dept by Louis Reau).

The unidentified sitter is fashionably dressed in a double-breasted coat with a wide turned-down collar and large buttons. He wears a wig and a linen stock tightly wound at his neck, and displays his shirt ruffles down his front. Alert, poised and stylishly dressed, his appearance is one of great confidence.

‘Appearance. Properly speaking the external surface of something, or in general what first affects the senses, spirit and imagination. Our errors almost all come from our haste to judge things, and, in our hurry, do not allow us to distinguish truth from what is mere appearance.’ [09/12/2015]
AN UNKNOWN MAN
French (Paris); signed and dated June 1786
By Pierre Merard (d. 1800)
Purchased by the John Webb Trust
[1993 - 2011] 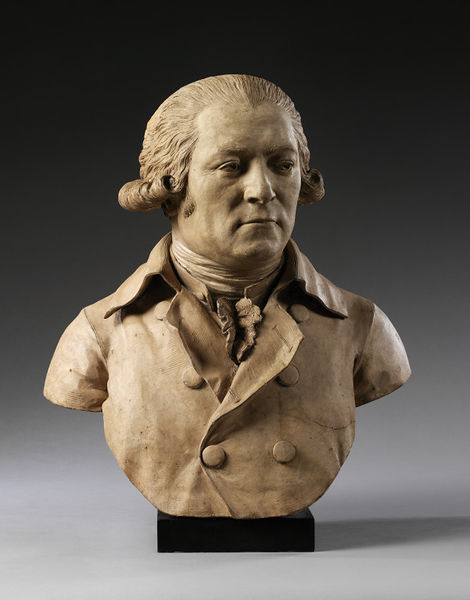