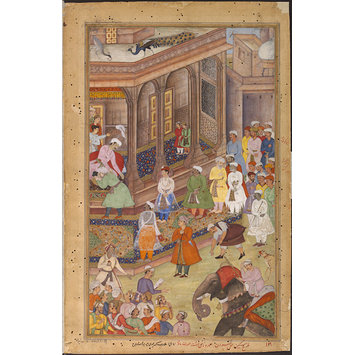 This illustration to the Akbarnama depicts the emperor Akbar greeting Rajput rulers and other nobles at court, probably in 1577.

The Akbarnama was commissioned by the emperor Akbar in 1589 as the official chronicle of his reign. It was written by his court historian and biographer Abu'l Fazl who finished the major part of the text by 1596. The illustrations were being painted as the historian drafted and rewrote his textby at least 49 different artists from Akbar's studio. After Akbar's death in 1605, this incomplete manuscript remained in the library of his son, Jahangir (r. 1605-1627), who recorded his ownership on the flyleaf, and later Shah Jahan (r. 1628-1658). The Victoria and Albert Museum purchased it in 1896 from Mrs Frances Clarke, the widow of Major-General John Clarke, who acquired it in Lucknow while serving as Commissioner of Oudh between 1858 and 1862.

Painting, in opaque watercolour and gold on paper, the ambassadors of Mirza Shahrukh paying homage to Akbar. Akbar is seated in the royal pavilion whilst before him leading dignitaries stand on a carpeted dais. An elephant and cheetah can be seen in the foreground.

'tarh Miskin/amal Sarwan/chehra nami hasht surat Madhav'
'Composition by Miskin/ Work [ie painting] by Sarwan / faces and eight portraits by Madhav'
This is a contemporary attribution in Persian, written in red ink at the bottom of the page.

The Akbarnama was commissioned by the Emperor Akbar as the official chronicle of his reign. It was written by his court historian and biographer Abu'l Fazl between 1590 and 1596, and illustrated between about 1590 and 1595 by at least forty-nine different artists from Akbar's studio. After Akbar's death, the manuscript remained in the library of his son, Jahangir. The Victoria and Albert Museum purchased it in 1896 from Mrs Frances Clarke, the widow of Major General Clarke, who bought it in India while serving as Commissioner in Oudh province from 1858 to 1862

Historical significance: The V&A's partial manuscript is thought to be the first illustrated copy of the Akbarnama. It drew upon the expertise of some of the best royal painters of the time, many of whom receive special mention by Abu'l Fazl in the A'in-i-Akbari. The inscriptions in red ink on the bottom of the paintings refer to the artists and indicate that this was a royal copy.

IS.2:114-1896
Two artists usually worked on the illustrations for Akbar’s manuscripts. Here, a third specialist added eight portraits of Akbar’s Central Asian visitors and leading Mughal court figures. Only one, the brilliant prime minister Raja Todar Mal, is named in the red marginal inscriptions. He is almost certainly the figure in white with a gold pen-and-ink case, an emblem of his high office, in his sash. His reforms included adopting Persian as the official language of the empire in 1584. [27/9/2013]

Composition by Miskin, painting by Sarwan and eight portraits executed by Madhav. Attribution place is likely to be Delhi, Agra or Fatehpur Sikri. 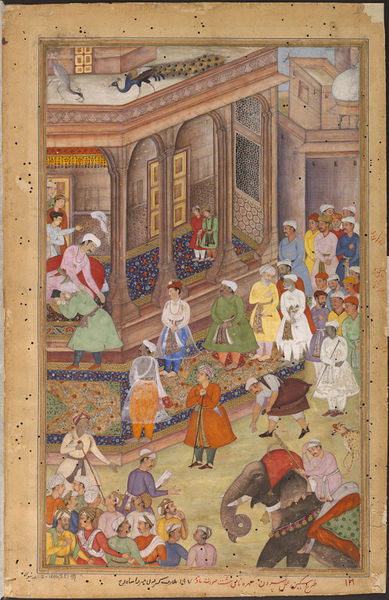