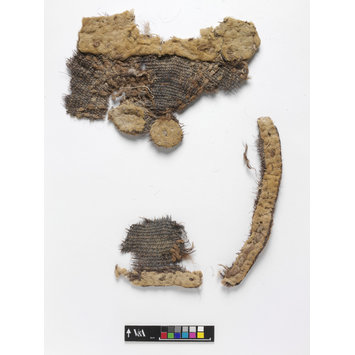 Three fragments from a sieve made of black-brown horse-hair gauze edged with felted yellow wool, applied to both sides. The felt and weave have been mended at some point with string of wool. The fragments were recovered from the site of Loulan which dates from the 3rd to the 4th century AD. The site of Loulan is remarkable for the carved wooden capitals, beams and balustrades that show clear affinities with western Classical decoration that filtered through Iran and Northwest India.

The site is part of an area of Central Asia we now call the Silk Road, a series of overland trade routes that crossed Asia, from China to Europe. The most notable item traded was silk. Camels and horses were used as pack animals and merchants passed the goods from oasis to oasis. The Silk Road was also important for the exchange of ideas. Whilst silk textiles travelled west from China, Buddhism entered China from India in this way.

These textiles were brought back from Central Asia by the explorer and archaeologist Sir Marc Aurel Stein (1862-1943). The V&A has around 650 ancient and medieval textiles recovered by Stein at the beginning of the 20th century. Some are silk while others are made from the wool of a variety of different animals.

One fragment is made from two groups of elements, with one group twining about the other. Irene Emery calls this 'single oblique twining'. There are irregularities in the structure that discount techniques such as ply-splitting and loop-maipulating (due to the fact that pairs of elements interchange). The smaller fragment includes a row in which two pairs of elements have been added to increase the size of the piece.

Attached to one of the fragments is a rectangular metal-rimmed label showing Stein number possibly in Stein's handwriting or that of his assistant, Miss F M G Lorimer.

Loulan was once an important garrison town which lay between the Pei shan and Taklamakan deserts on the Silk Road. The city was also a centre of Buddhist worship. When Sven Hedin explored the site in 1900, he discovered remains of a stupa, reliefs depicting Buddhas among lotuses, and statues of deities. This strategically important city is mentioned in Chinese records for the first time in 176 BC with the conquest by the Xiongnu, but the area fell under Chinese control around 100 BC. Located in the middle of the Silk Road, Loulan had contacts with many cultures, represented by hundreds of documents in Chinese, Indian Kharosthi, and Sogdian scripts which were unearthed by Hedin and Stein. A woollen cloth, which Stein found in a tomb, depicted the head of Hermes and his caduceus, or staff, in the classical style of western Asia. He also unearthed a number of mummies with feathered felt caps and arrow shafts by their sides; which indicated that a community of herdsmen and hunters had inhabited the region long before various imperial conquests. Loulan flourished until the fourth century AD, when it was abandoned, due to the desiccation of a nearby lake, Lop Nor. The V&A holds, on loan, a large number of textiles from Loulan, including cotton, wool and figured silks, carpet and tapestry fragments. 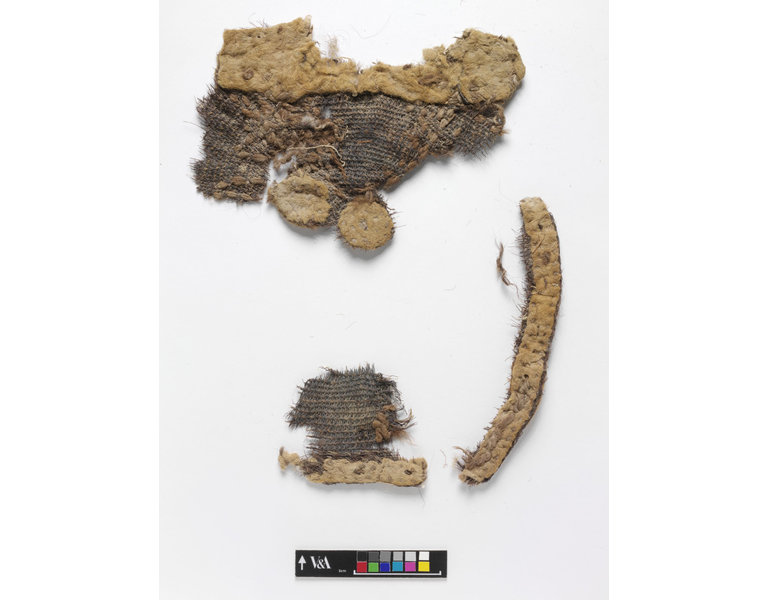