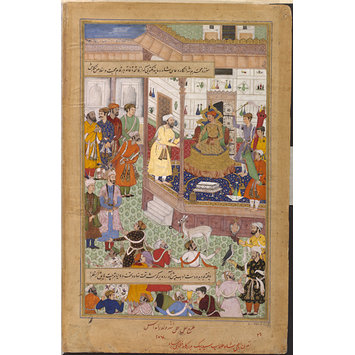 This illustration to the Akbarnama (Book of Akbar) depicts the Mughal emperor Akbar (r.1556–1605) receiving the Iranian ambassador, Sayyid Beg, in 1562, during Akbar's seventh regnal year. Sayyid Beg was the cousin of Shah Tahmasp of Iran, being the son of the shah’s paternal uncle Ma’sum Beg. The emissary had been sent to convey the shah's condolences on the death of Akbar’s father, Humayun in 1556, and to congratulate the young ruler on his accession. Sayyid Beg brought ‘fiery Arabian steeds and fleet-footed Iranian and Anatolian horses and presents of precious textiles and rare objects’ [Wheeler M. Thackston, ed and translator, Abu’l-Fazl, The History of Akbar, Murty Classical Library of India, vol. 3 p. 246]. This is the right half of a double page designed by the Mughal court artist La’l. The left half (Museum no. IS.2:28-1896) shows the entourage of the ambassador bearing their gifts.

Painting, in opaque watercolour and gold on paper, the emperor Akbar receiving Sayyid Beg, the ambassador from Persia, at Agra, the imperial capital in 1562. The image is overlaid by two bands of text at the top and bottom, extending from the left-hand margin.

The Akbarnama was commissioned by the emperor Akbar as an official chronicle of his reign. It was written by his court historian and biographer Abu'l Fazl between 1590 and 1596, and illustrated between about 1590 and 1595 by at least forty-nine different artists from Akbar's studio. After Akbar's death, the manuscript remained in the library of his son, Jahangir. The Victoria and Albert Museum purchased it in 1896 from the widow of major General Clarke, an official who served as the Commissioner in Oudh province.

Composition by La'l, colours and details painted by Nand.
Attribution place is likely to be Delhi, Agra or Fatehpur Sikri. 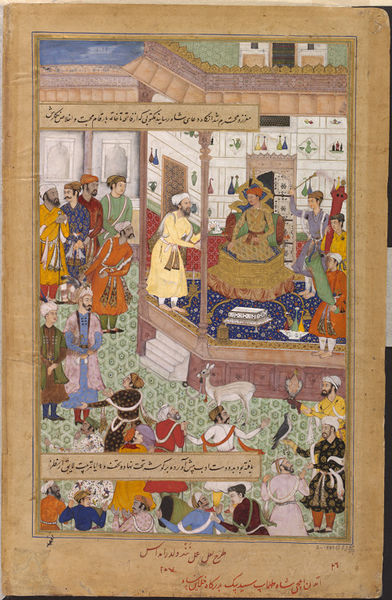