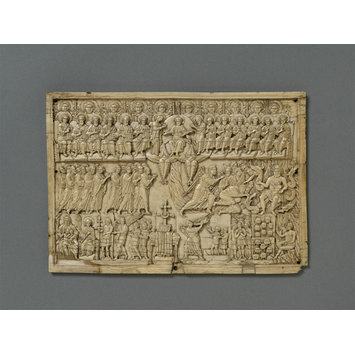 This panel is Byzantine (Constantinople), originating from the 11th century.
This type of Last Judgement, with the empty throne at its centre symbolising Christ as Judge is typically Byzantine. The scene resembles the same subject depicted in mosaic on the west wall of Torcello Cathedral, of about 1100. The mosaic was probably based on a model such as this ivory.
The iconography and the style of this relief represent the heavy influence of the Byzantine originals in the West and in particular in Venice.

Above, in the centre, Christ is seated on a globe between the Virgin and St John the Baptist (the Deesis); they take their place as intercessors , at the Last Judgement, interceding to save the repentant sinners, while the twelve apostles besides them are assessors, helping the Judge to decide the fate of the souls of the dead. At the bottom , to the right of the centre, an angel blows a horn, the signal for the resurrection of the dead. The left of the central zone shows two groups of the Blessed and below various saints are led into Paradise, already occupied by the penitent thief (with his cross), the Virgin, and Abraham with Lazarus in his bosom. A river of fire descending from below Christ's feet, between two cherubim, leads to Hell on the right, where an angel ushers the Damned towards Satan on his throne of serpents. The figure in Satan's lap may be the rich man (as a pendant to Lazarus in Paradise). The figures at the bottom right have been identified as the sinners gnawing their lips and tongues mentioned in the apocryphal Apocalypse, or 'the violent who walk naked in the darkness', and the skulls represent those who sinned with their eyes and by touch. The empty throne with the open book and the instruments of the Passion is the Byzantine 'Etimasia', symbolising Our Lord as Judge.

According to the label on the back the relief was found in Stafford House. This building was erected in the first half of the nineteenth century, occupied in part of the site of Godolphin house, and it is possible that the two names have been confused.
Was in the collection of Rev. George Wharton, Precentor of Radley College, Abingdon, Berkshire, until 1926; sold at Christie's London. 16 March 1926, lot 91, and purchased from G.R. Harding London, after the sale (£1200).

This representation is an abreviated version of the subject seen in the mosaics in Torcello cathedral near Venice of c. 1100. One unusual iconographic detail shared by both representations is the presence of the repentant thief in the Paradise itself rather than proceeding towards it with the other blessed. Most elements of the scene are already mentioned in the fourth-century description of the subject by Ephrain Syrus, but the typical Byzantine scheme, of which this is an example, does not seem to have developed until much later. The Etimasia, for instance, only forms part of the Last Judgement from the eleventh century onwards. The iconography and the style of this relief represent the heavy influence of the Byzantine originals in the West and in particular in Venice. 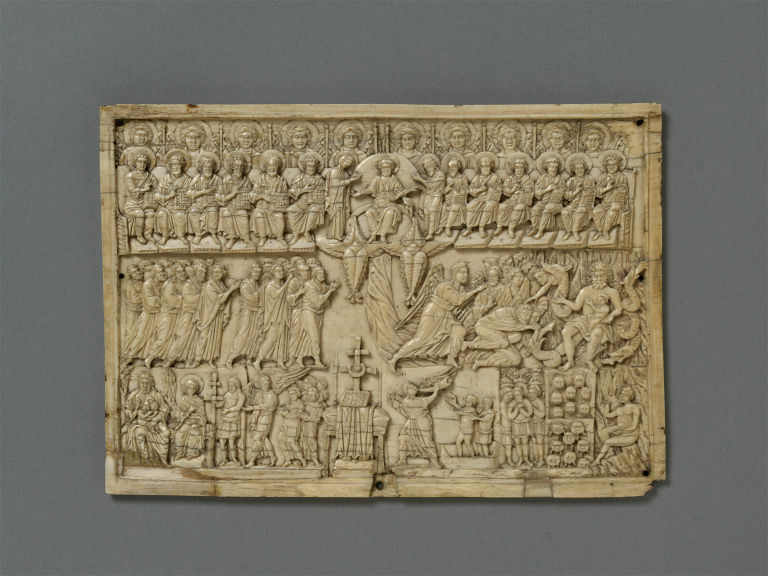