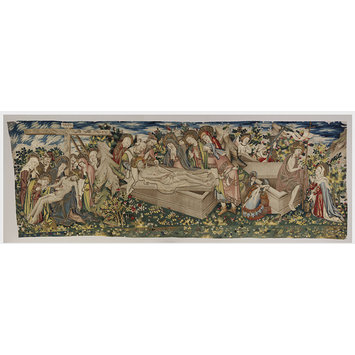 This tapestry shows three scenes from the Passion cycle, which tells of the sufferings of Christ leading up to and following the crucifixion. These scenes are all that remain from hangings probably depicting the whole cycle. The scenes shown are the lamentation at the foot of the cross, the preparation for the entombment, and a resurrection scene, which is combined with Christ blessing Mary Magdalene as he steps from the tomb.

The tapestry is exquisitely and richly woven with gold thread used not only in the ornate haloes and garments but also in the foliage of trees and flowers. It is thought to have been woven in Arras, one of the main centres for tapestry weaving in the 13th and 14th centuries, located in the southern Netherlands and controlled by Philip the Bold of Burgundy from 1385. Throughout this time the tapestries of Arras were so famous that ‘arras’ became synonymous with ‘tapestry’ in England and Italy, and tapestries frequently appear in documents under that name. The present example has marked similarities with a tapestry documented to Arras that was made for the Cathedral of Tournai in 1402 and shows the story of saints Piat and Eleutherius.

Because of the nature of the subject matter it seems likely that this tapestry, together with the rest of the original set, must have been intended to hang in a great church or cathedral.

Tapestry with scenes of the Passion of Christ : from left to right, Descent from the Cross, Entombment, and Resurrection. These form a continuous scene divided by rocks, set against a background of sky and trees and a foreground of verdure. On the left the body of Christ rests in the lap of the Virgin. St John, kneeling, holds the right hand to his lips. Behind are the figures of Joseph of Arimathea, Nicodemus and the Holy Women. In the centre scene the body of Christ rests on a cloth on the lid of the tomb, round three sides of which are grouped the other figures. On the right Christ, holding the banner of the Resurrection, steps out of the tomb; St Mary Magdalene kneels in front, the soldiers are grouped around and an angel stands behind the tomb. (from Wingfield-Digby catalogue).
15-16 warp threads per inch.

The tapestry was purchased for £3000 from the Spanish Art Gallery (Lionel Harris), Conduit Street, London, using funds from the bequest of Captain H B Murray. It had been in the collection of Lord Willoughby de Broke, at Compton Verney, and was sold at auction by Sothebys on 11 February 1921, lot 120.
The tapestry had previously been on loan to the museum, from 1 August 1913 to 15 June 1914.
Nothing more is known of its previous history.

Historical significance: The tapestry is exquisitely and richly woven with gold thread used not only in the ornate haloes and garments but also in the foliage of trees and flowers. Other examples of tapestry-woven altar frontals of similar date (Cluny Museum, Thyssen-Bornemisza collection) show that tapestry-weaving of the highest quality was used for this purpose in the 15th century. It has been compared in style to a tapestry that was made for the Cathedral of Tournai in 1402, ordered from Pierre Fere of Arras, which shows the story of saints Piat and Eleutherius. It is also comparable with the Passion tapestries at St Mark's Basilica in Venice, from the 1420s, and the Passion tapestry at La Seo, Saragossa, Spain.

From the late 14th century Arras was renowned for the quality of its tapestries, and many of the finest incorporated gold thread, the extensive use of which in figurative tapestry may have been an Arras innovation. From the 1390s most of the fine-quality tapestries purchased by the leading nobility appear to have been made in Arras.(references from Thomas Campbell, Tapestry in the Renaissance, New York, 2002, p.31).

Because of its subject matter, and quality, it seems likely that this tapestry was intended to hang in a great church or cathedral, although nothing is known of its provenance prior to an English private collection in the early 20th century. It may have been an altar frontal or dossal.
The church was an important sphere of patronage in tapestry production. Tapestry constituted a central part of the decoration of the greater establishments - many of the leading church figures were members of the aristocracy, and had been raised in circumstances where tapestry was seen as a manifestation of power. Sumptuous altar frontals and dossals, and larger sets depticting scenes from the Life of Christ, were sometimes donated by wealthy churchmen or benefactors, and were usually reserved for use on religious feast days.The cathedral church at Angers had tapestry sets of saints' lives hung in the choir on feast days; for the rest of the year the choir was hung with the painted cartoons from which the tapestries had been woven. (references from Thomas Campbell, Tapestry in the Renaissance, New York, 2002, pp.26-7).

Tapestry with scenes of the Passion of Christ, Arras, early 15th century