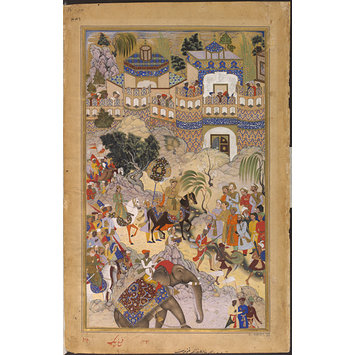 This illustration to the Akbarnama (Book of Akbar) depicts the Mughal emperor Akbar (r.1556–1605) riding on a black horse through Surat in western India after taking the city in 1572.

Painting, in opaque watercolour and gold on paper, Akbar's triumphant entry into Surat. A procession of figures follow the emperor's cavalcade as he surveys the fort of Surat. A musician, bodyguards and camels follow in his wake. In the foreground, an elephant can be seen.

'Farrukh Beg'
[artist's name]
The contemporary attribution to Farrokh Beg is in the margin below the painting.

The Akbarnama was commissioned by the emperor Akbar as the official chronicle of his reign. It was written by his court historian and biographer Abu'l Fazl between 1590 and 1596, and the V&A's partial manuscript was illustrated between about 1590 and 1595 by at least forty-nine different artists from Akbar's studio. After Akbar's death, the manuscript remained in the library of his son, Jahangir. The Victoria and Albert Museum purchased it in 1896 from Mrs Frances Clarke, the widow of Major General Clarke, who had bought it in India while serving as Commissioner of Oudh province.

Historical significance: It is thought to be the first illustrated copy of the Akbarnama. It drew upon the expertise of some of the best royal painters of the time, many of whom receive special mention by Abu'l Fazl in the A'in-i-Akbari, the third volume of the Akbarnama. The inscriptions in red ink on the bottom of the paintings refer to the artists and indicate that this was a royal copy.

Composed and painted by Farrukh Beg. 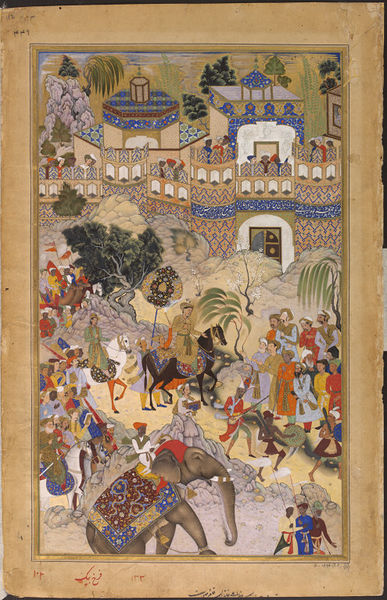