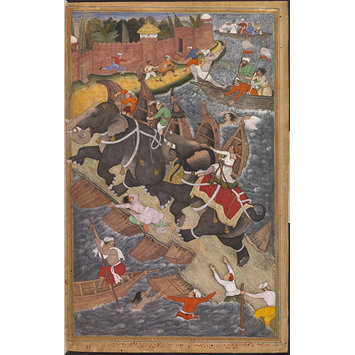 This illustration to the Akbarnama (Book of Akbar) is the left side of a double-page composition (the right half is Museum no. IS.2:21-1896) designed by Basawan, whose name is given in the librarian's notations on the other page. The composition depicts a famous incident in the life of the Mughal emperor Akbar (r.1556–1605) outside the fort of Agra in north-west India in 1561. According to Akbar’s court historian and biographer Abu’l Fazl, the royal elephant Hawa’i was reputed to be one of the strongest and most difficult of all those owned by the emperor, yet Akbar mounted him with ease and pitted him against an equally fierce elephant named Ran Bagha. The illustration shows Akbar, mounted on Hawa’i, pursuing Ran Bagha across a bridge of boats over the River Jumna, which collapses under the weight of the elephants. A number of Akbar’s servants have jumped into the water to escape.

The Akbarnama was commissioned by Akbar as the official chronicle of his reign. It was written in Persian by Abu’l Fazl between 1590 and 1596, and the paintings for the V&A’s partial copy of the manuscript were done between about 1590 and 1595 as the historian drafted and then revised his text. This is thought to be the earliest illustrated version of the text, and drew upon the expertise of some of the best royal artists of the time. Many of these are listed by Abu’l Fazl in the third volume of the text, the A’in-i Akbari, and some of these names appear in the V&A illustrations, written in red ink beneath the pictures, showing that this was a royal copy made for Akbar himself. After his death, the manuscript remained in the library of his son Jahangir, from whom it was inherited by Shah Jahan.

Painting, in opaque watercolour and gold on paper, left half of a double page composition (with IS.2:21-1896). Akbar, clad in a white jama with orange turban and holding a golden ankus, rides the elephant Hawa'i as it pursues another elephant over a bridge of boats across a river outside the red sandstone walls of Agra Fort.

'Tarh-e Basawan/Amal-e Chatra'
'Composition by Basawan/Work [=painting] by Chatra'
Contemporary librarian's attributions in Persian, in red ink in the margin below the painting.

The Akbarnama was commissioned by the emperor Akbar as the official chronicle of his reign. It was written by Abu'l Fazl between 1590 and 1596 and is thought to have been illustrated concurrently by the royal artists. After Akbar's death in 1605, the manuscript remained in the library of his son, Jahangir (r. 1605-1627) and later that of Shah Jahan (r. 1628-1658). The Museum purchased it in 1896 from Frances Clarke, the widow of Major General Clarke, an official who had been the Commissioner in Oudh province between 1858 and 1862. 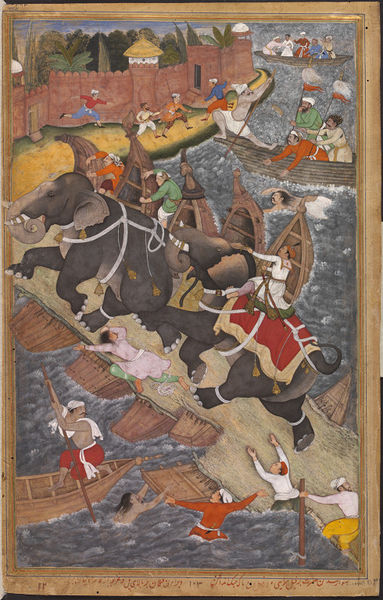