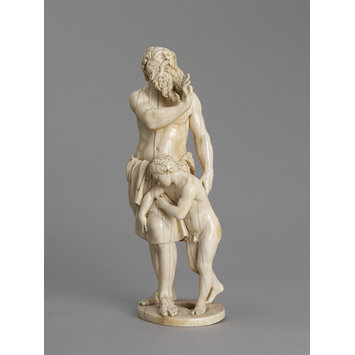 Abraham, bearded, and wearing a long loincloth, stands with his left hand resting protectively on the back of his young naked son Isaac, standing in front of him. His right arm is bent, and he lifts his hand as if listening to the angel's voice with the message from God telling him not to sacrifice Isaac. Although no knife or firewood is depicted, Abraham's pose and expression suggests he is listening with relief to the angel, in the realization he does not need to kill his son. The style and form of this group strongly suggest it is by the South German sculptor Leonhard Kern, who specialised in ivory. It is likely to date from the mid-17th century.

Kern (1588-1662) trained under his brother Michael Kern (1580-1649) and then spent four years travelling mainly in Rome, Naples and Venice, though he also visited North Africa and Slovenia. Hi figures, often nudes, are distinctive in style, being both monumental and individualistic, inspired by South Netherlandish Sources, such as Rubens, but fusing them with Italianate poses. His female nudes are frequently shown with elaborate coiffures.

Abraham and Isaac, ivory group. Abraham wearing a full beard, and draped from the waist to the knees, looks upward and to the right. His right arm is raised, while his left is held loosely at his side. The nude Isaac is leaning over, and is partly supported by Abraham's left leg.

The group shows Abraham and his son Isaac on their way to the place of Isaac’s sacrifice according to the account in the Bible, genesis chapter 22, verses 2-3.
[1993 - 2011] 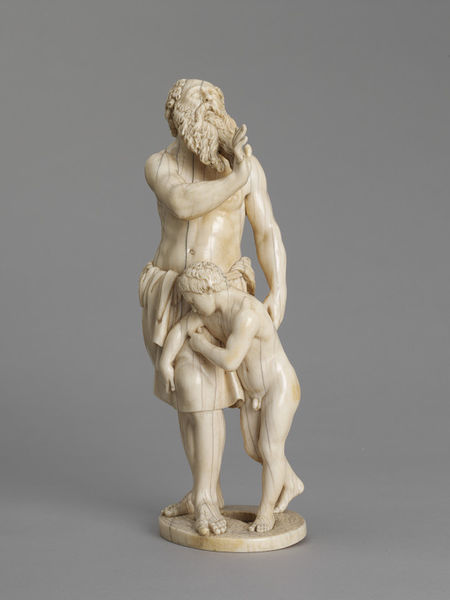