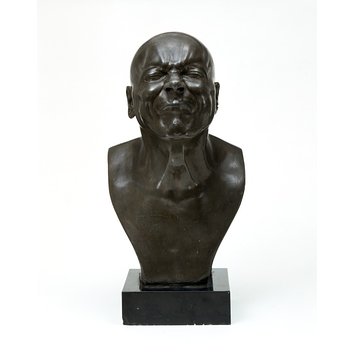 Franz Xaver Messerschmidt was born in Bavaria, and studied with one of his two sculptor uncles before moving to Vienna. Here he had a successful early career, being given several royal commissions for the Austrian court. His work in 1760s included busts and relief portraits characterised by uncompromising realism.

In 1774 Messerschmidt returned to Wiesensteig, his native Bavarian town, and later to Pozsony, at that time the capital of Hungary (Pressburg in German, now Bratislava, Slovakia). He devoted these years to creating a series of ‘character heads’ which were completed by June 1781. This fine example belongs to the third group, of bald-headed figures. The heads illustrate different states of mind or reactions to smell. This example is conceivably the original of ‘intense odour’ but is more likely a variation of ‘strong odour’; a man with eyes closed in the act of smelling an unpleasant odour intently. It has also been suggested that the expression is the result of experiencing pain.

It is thought, from a number of contemporary reports, that Messerschmidt was suffering from psychiatric problems, including hallucinations; and perhaps also from a digestive complaint. Perhaps as a distraction, he pinched himself in front of a mirror, contorting his face with extreme expressions which he captured in these busts. Whatever his intentions, Messerchmidt’s heads anticipate the interest in psychology and emotional intensity which has interested artists in the following centuries.

The series of heads was greatly admired, and was exhibited during the century after the artist's death until 1889, when it was split up and sold.

Pressburg (made)
Bratislava (Bratislava was formerly known as Pressburg., made)

The sculptor Messerschmidt created a series of character heads illustrating different states of mind and sensory reactions. His interest in extreme expressions might have been caused by the psychiatric disorders from which he suffered, and perhaps also by a painful digestive condition. His character heads are early explorations of the intense psychological and emotional states that fascinated later artists.

‘Smell: sense destined by Nature to receive and distinguish odours. Smell seems however less of an individual sense than part of taste, for which it is the sentinel. Everyone knows that the inside of the nose is the organ of smell, but few know the artifice with which this interior is constructed to receive this sensation.’ [09/12/2015]
THE STRONG SMELL (character study)
Austrian; 1775-83
Lead
By Franz Xaver Messerschmidt (b. 1736; d.1783)
Purchased under the Murray Bequest

This is one of a series of 69 heads which Messerschmidt made to illustrate different human emotions and characters, as revealed by facial expressions. The series was greatly admired, and was exhibited together during the century after the artist’s death, until 1889 when it was split up and sold.
[1993 - 2011] 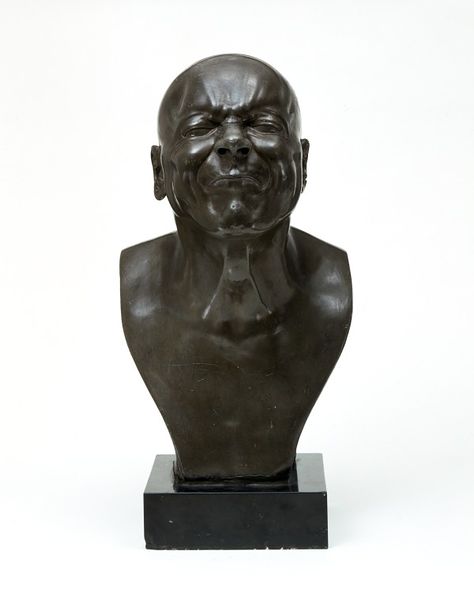