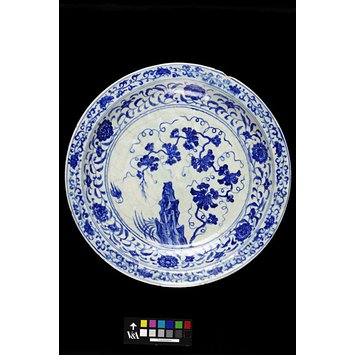 A pottery workshop was established at the court at Samarqand around 1401 under the patronage of Timur, the Uzbek ruler. Timur had invaded Syria, and forced potters from Damascus to move to Samarqand. Timur was a great patron of art and culture, and having established his court, he needed craftsmen to supply luxury wares. At the time, Chinese porcelain was available in sufficient quantities to be used as tablewares for dining, but supplies had ceased with the fall of the Yuan dynasty. This dish is a close copy of Chinese Yuan dynasty originals, possibly imitating examples included in the spoils from his campaigns in Syria.

Fritware shards painted in blue imitating Chinese prototypes have been found in Samarqand (cf. C.189-1911). The petrofabric of this dish reveals that the quartz, a crucial component, was derived from sand rather than the usual river pebbles used in Iranian technology to make the body. This confirms that the potters from Damascus working in Samarqand, had brought their technology with them.

In Oliver Watson, 'Islamic Pots in Chinese Style', Burlington Magazine, 1987 (May), pp.304-6, suggested a Syrian origin for this piece.

Middle Eastern potters soon began to make copies of Chinese blue-and-white porcelain. This dish is the work of potters from Damascus in Syria. In 1402, their city was conquered by the Uzbek ruler Timur. He forced the potters to move to his capital, Samarqand, where the dish was produced.

Made by Syrian potters transplanted from Damascus to Samarqand by Timur in 1402. 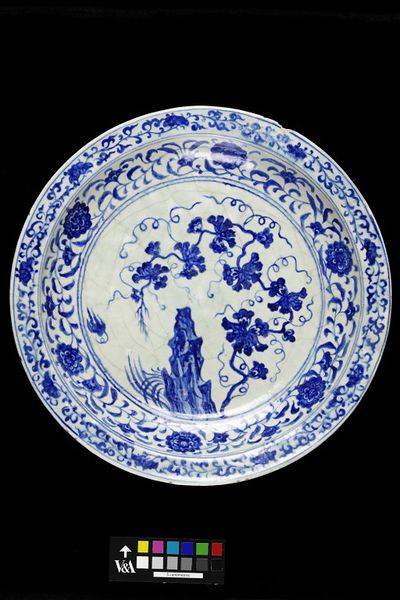