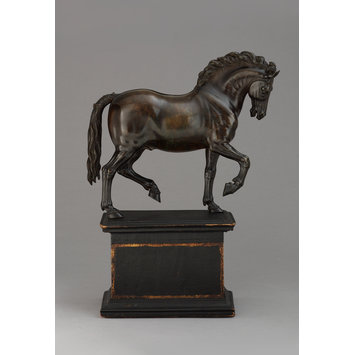 This contemporary cast of one of Giambologna's favourite models is a reduction of the horse from the monumental equestrian bronze statue of Duke Cosimo I de' Medici, erected in the Piazza della Signoria, Florence in 1594. Giambologna was inspired by the antique over-sized bronze of the Emperor Marcus Aurelius (now in the Capitoline Museum, Rome), which had been set up as the focus of Michelangelo's rearrangement of the Piazza del Campidoglio, Rome. A version of the Pacing Horse was sent as a diplomatic gift to Henry, Prince of Wales, in 1612 and was inherited by his brother, King Charles I.

This object came to the Museum through a bequest from George Salting in 1910. Noted for its generally high quality, its ceramic core material has been given a terminal casting date of 1605, indicating that it was cast during the sculptor's lifetime.

Historical significance: The inspiration for this particular version came from the antique bronze of Marcus Aurelius (now in the Capitoline Museum, Rome), which was set up as the centrepiece of Michelangelo’s redesign of the Piazza del Campidoglio in Rome. Although not the first small-scale horse (cavallino) produced in his workshop, the present example is of particular significance as thermoluminescent tests on the core material indicate a terminal casting date of 1605 (within Giambologna’s lifetime). In Florence, the earliest references to a bronze statuette of a horse are found in documents of the Salviati family, between 1574 and 1579, when they were having one cast from a model by Giambologna. This establishes a rough date by which Giambologna’s standard model of a horse had been produced, long before it was re-utilised in the monument to Cosimo of 1590-4. Cosimo I was to be cast in bronze and to stand nearby Michelangelo’s David in the Piazza della Signoria, a highly symbolic and politically charged space. The imperial associations of this monument would therefore have had even greater resonance, a factor that would not have been lost on Giambologna or his Medici patrons.

This classic composition of a Pacing Horse was one of the major types of small bronzes produced in Giambologna’s workshop during the sixteenth and seventeenth centuries. Essentially a reduction of the life-size version he designed for the monument to Cosimo I de’ Medici in the Piazza della Signoria, Florence in 1594, the horse was a much-loved theme of Giambologna’s, adapted from Graeco-Roman prototypes. Giambologna would also have been aware of Donatello's and Verrocchio's equestrian statues in Padua and Venice, albeit at second hand, and of Leonardo da Vinci's studies for similar statues in Milan. The inspiration for this particular version came from the antique bronze of Marcus Aurelius (now in the Capitoline Museum, Rome), which was set up as the centrepiece of Michelangelo’s redesign of the Piazza del Campidoglio in Rome begun in 1536. Details such as the flowing design of the mane and the decorative braiding on the tail, are examples of the similarities carried over from the Marcus Aurelius bronze to this statuette and the later Cosimo I monument.

While the opportunity for this full-scale equestrian statue did not emerge until late in Giambologna’s career, (when he was commissioned by Ferdinando I in 1587 to create a monument to his late father, Cosimo I), casting a horse at life-size or over was an extremely complex and expensive operation. However, given the time lapse of the final monument, it is possible that, despite lacking a rider, this statuette was one of many preparatory models dating from around 1581. Baldinucci suggests that while Cigoli and Goro Pagani provided studies for the Cosimo monument, Antonio Susini executed both the models and moulds and played a large part in the final full-scale casting. This account demonstrates the practices of many such workshops at this time, where artist collaboration was frequent.

Giambologna's workshop and followers produced a number of monumental equestrian statues for various crowned heads of Europe, and in 1612, a version of the Pacing Horse was amongst those sent by the Medici as a diplomatic gift to Henry, Prince of Wales, subsequently inherited by his brother, King Charles I. Although the large-scale versions obviously had various associations, small-scale examples became highly popular amongst collectors 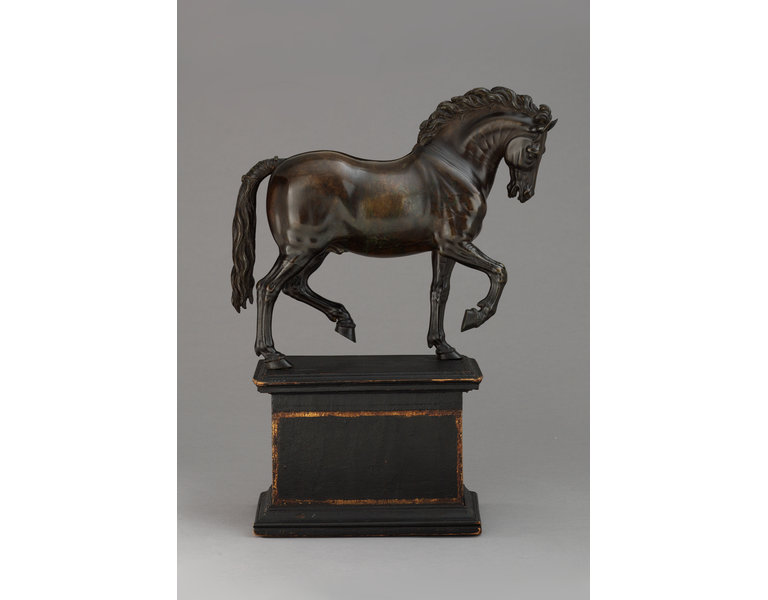