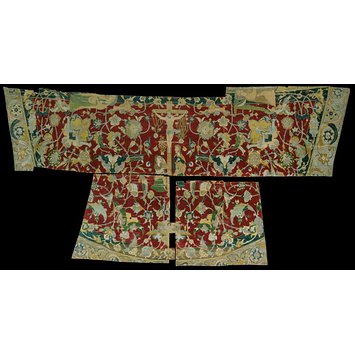 This is a spectacular example of the art made for a Christian community living under Muslim rule in the Middle East. Known as a shurjar, it may have been made for an Armenian church in Isfahan, which had a large Armenian population.

Armenian priests wore this vestment to celebrate Mass. Its semi-circular form is similar to the western cope. The Crucifixion would have been at the priest’s back, and the figures of Mary and the Archangel Gabriel formed an Annunciation scene on his chest.

This shurjar was woven as a carpet with a very fine silk pile. It is now fragmentary as a previous owner began to cut it up, probably to provide carpet samples.

A priest's vestment, called shurjar in Armenian, in the form of an exceptionally fine silk carpet, originally semicircular in shape (compare the Western cope). At some point in its history, probably when its deteriorating condition made it unusable in church services, the vestment began to be cut up for carpet samples. This process was halted when the value of the shurjar as an antiquity was recognized. Two of the samples cut from the vestment were donated to the Museum in 1926 and 1930 and have been re-integrated into the object.

The design of the vestment incorporates a Crucifixion and an Annunciation scene. The Crucifixion on the back is based on a Western model (note the Latin abbreviation INRI pinned to the top of the Cross, and the blond hair of Mary Magdalene, a Western convention). The model may have been transmitted to Iran in a printed Armenian Bible. By contrast the Annunciation reflects the style of painting current in Isfahan in the 17th century. When worn by the priest, the two figures (the Archangel Gabriel on the priest's right, and Mary the Mother of God on the left) faced each other across the vertical opening at his breast. The remains of an inscription in Armenian have been identified in this area. They may be the Magnificat, the hymn based on the words spoken by Mary, now miraculously with child, when she visited her cousin Elizabeth, as recorded by the Evangelist Luke.

The main field is a rich red, with a dark blue stripe around the edge. The whole is covered by a pattern of scrollwork set with a great variety of stylized, compound flower and leaf motifs, some very large and many unrecognizable from nature. The scrollwork is interrupted by the Crucifixion scene, and the voids in this composition are filled with three flowering plants and other motifs. The main field is surrounded by an outer border with a ground brocaded with metal-wrapped thread. It contains a double pattern of curving tendrils that also bear stylized flower and leaf motifs.

The underlying structure of the vestment has silk warps and wefts, and the pile was knotted in silk, with areas of brocading in metal-wrapped thread. The colours of silk used for the pattern have been identified as ochre, red, pink, green, deep blue, pale blue, and white.

Iran (made)
Isfahan (probably, made)

Armenian priests wore this vestment, the shurjar, to celebrate Mass. Its semi-circular form is similar to the Western cope. The Crucifixion hung at the priest’s back, and the figures of Mary and the Archangel Gabriel formed an Annunciation scene on his chest. This shurjar was woven with a fine silk pile like a carpet. It is now fragmentary as a previous owner began to cut it up, probably to provide carpet samples.

Museum nos. 477-1894; T.30-1926, T.211-1930,
Given by Messrs A. & M. Indjoudjian Frères, Paris
[2006-2019]
MASS-VESTMENT
PERSIAN; 16th -17th century
This unique vestment, now mutilated, originally formed slightly more than half a circle, with a double border all round. When worn, the Annunciation group was on the front and the Crucifixation group on the back of the vestment. It was evidently made for a Chrisitian community, such as the Armenian colony settled by Shah Abbas at New Julfa, Isfahan, in 1605.
It is very finely knotted in the carpet technique, entirely of silk, except for areas of gold and silver thread. Warp, plied silk; weft, three shoots of silk after each row of knots. The large pieces were purchased; the two smaller fragments were given subsequently by Messrs.A. and M. Indjoudjian Freres, Paris. [Used until 10/1997] 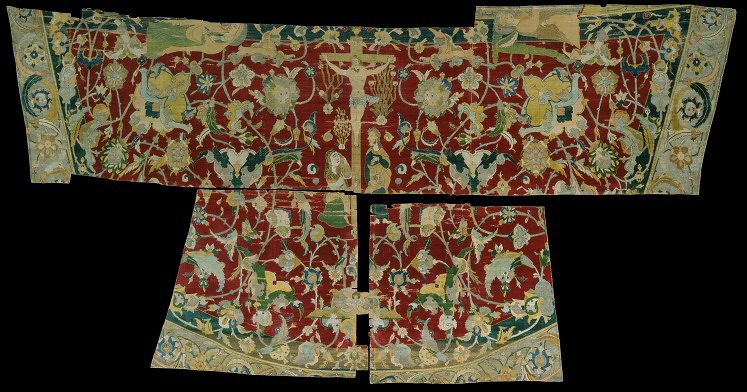