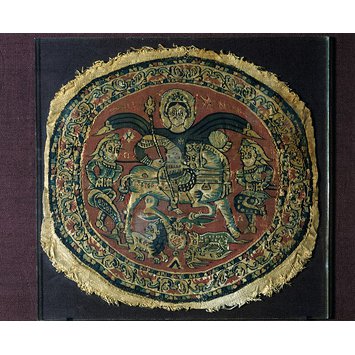 Panel from a tunic

This colourful panel was originally attached to a linen tunic found in an Egyptian burial site. The panel was probably removed from the garment at the time of excavation or soon afterwards. The mounted, haloed figure with a flowing cape represents a victorious emperor, the halo being a symbol of high secular status, as well as having Christian significance. He has what appear to be two captives, who can be identified as Persian by their dress. There are traces of letters above the rider's head which are now illegible.

Tapestry-woven roundel from a tunic (coloured wools and undyed linen wefts; linen warps). The image is of a a nimbed and crowned figure on horseback, with a sceptre in his right hand and a globe in his left. The end of his purple mantle (now faded to brown) is spread out behind him by the wind. The mantle is worn over Roman armour / breastplate. On each side of the horse is a captive with arms behind back and represented in motion; to the right held by a rope at the neck is a bearded man in trousers; on other side, not held by rope, is what seems to be a woman (?), also dressed in trousers. Below in the middle is a plant, with a lion to the right and an antelope attacked by a spotted animal to the left. There are traces of letters above the rider's head. The background is red. The border consists of S-shaped foliated stems on a white ground. There are traces of letters above the rider's head which are now illegible.

Slit tapestry woven in one piece (i e not inserted tapestry piece), red, pale brown and many different shades of blue.

Tapestry-woven in linen and wool

Historical significance: Significant as an excellent example of the complex figurative tapestry roundels made to be applied to tunics in post-Arab conquest Egypt.

The subject
The victorious Emperor portrayed could possibly be Heraclius (610-641). The Persian costume consists of trousers, a belted blouse with decorative bands both at the V-shaped neck-opening and on the shoulders, and a conical hat. The blouse was usually also decorated with a band on the front and/or around the hem. Garments of this description have been found in burial-grounds in Egypt.

Political context
When Heraclius first came to the throne in 610, the Byzantine Empire was being attacked from all sides; in the west, the Avars and Slavs were expanding into the northern Balkans and, in the east, the Persians under the rule of Chosroes had begun a series of successful attacks on the empire resulting in the loss of Damascus in 613, Jerusalem in 614 and Egypt in 619. Heraclius signed a peace treaty with the Avars in 619, and in the autumn of 622 invaded Armenia and soon won several victories over the Persians. For the next several years, Heraclius unsuccessfully attempted to break through the Persian army and into Persia. However, in December of 627, Heraclius won an important battle at Nineveh during which most of the Persian army was destroyed. A treaty was later secured and for all practical purposes, the Persian Empire no longer existed. The defeat of the Persians created a larger problem for the Byzantine empire - it removed the buffer between the Arabs and the Byzantines, allowing the two empires to come into contact and conflict. In 636 the Byzantine empire lost Mesopotamia, Armenia and eventually, in 641 Egypt, all to the Arabs.

Construction and decoration
This roundel was originally used as decoration on a tunic. In the Byzantine period (4th-6th centuries), figurative decoration on both linen and wool tunics was used more frequently, and became increasingly colourful (designs were usually worked on light coloured grounds, using coloured wools - red, orange, yellow and green - complementing the dominant purple). Imagery encompassed scenes from Greek and Egyptian culture, and symbols of Christianity - classical mythology and Dionysian revelries, Nile riverscapes with nereids, fish and waterfowl, pastoral scenes and wild animals and birds associated with hunting (as here), in particular lions, antelopes or gazelles, dogs, hares, ducks and patridges or quail. Under Arab rule after 641, many tapestry woven ornaments were woven separately from the tunic and applied afterwards. The ornaments belong to various iconographic groups, including biblical scenes (from Old and New Testament) and the continuation of established motifs.

Collecting context
The collection sold by Harold Wallis to the V&A comprised:
Vestments @ £450
Costumes @ £120
Embroideries and Woven Fabrics @ £280 (to which this piece belonged).

Panel from a tunic, tapestry woven in wool and linen, Egypt, 700s

From an unknown burial site 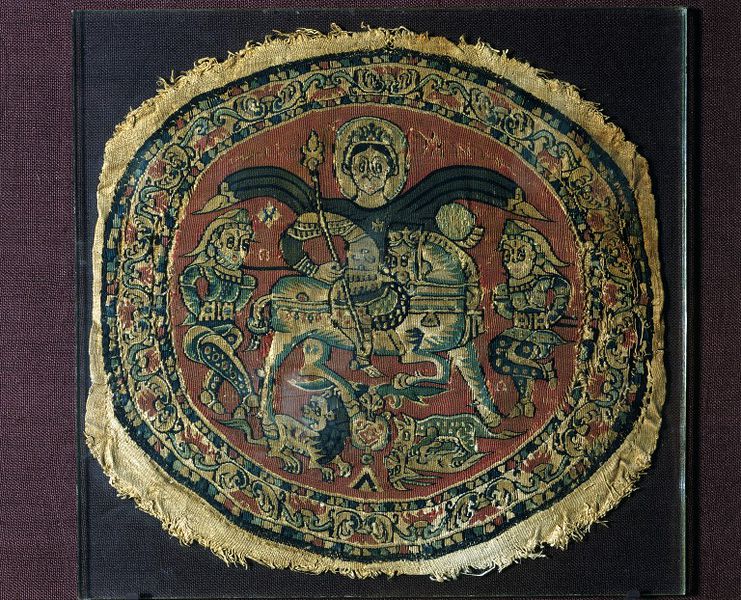