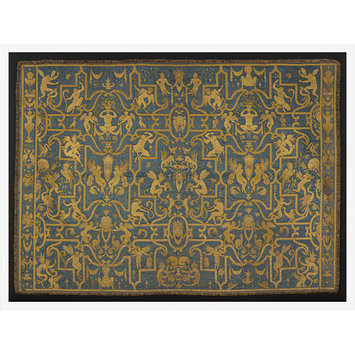 A bed-head or tester filled the space between the head-board of a bed and the roof. This specimen is thought to be the only known example of a complete and unaltered tester for a 16th century bed. It has a pattern in yellow satin, cut to shape and applied to the blue satin ground. The design consists of scaffolding of bandwork forming varied shaped compartments, with grimacing masks and human and half-human figures holding music sheets, musical instruments, leafy branches or baskets, or grappling with strange beasts and birds. The detail is embroidered in silk thread. The workmanship is of the highest professional quality and suggests a princely commission.

This bed-head was originally though to be Italian as the grotesque style started there. The term grotesque related to images found principally in Nero's Golden Palace in Rome when it was 'rediscovered' in the 16th century by Italian artists. 'Grotesque' was an adjective derived from 'grotto' and did not relate to the eerie nature of the images. The style became particularly favoured in France, from a comparatively early date, through the influence of Italian artists working in the French court.

The design of the embroidery seen here is a French variation of the grotesque style, related, for example to the grotesque prints done from 1550 onwards, by Paris engravers Jacques Androuet du Cerceau and Etienne Delaune. Two small fragments of a French embroidered bed valance identical in style to this panel are in the Musee des Arts Decoratifs in Paris and must be part of same bed ensemble.

Bed-head with a pattern of yellow silk strapwork and grotesques applied to a blue satin ground. The satin has been worked over paper, through to a fine linen ground of dark blue, the whole being lined with linen.

Throughout, great care has been taken to lend the figures a degree of naturalism; the appliquéd figures' musculature has been defined with embroidery, and different pelts for the beasts are suggested through the use of embroidered spots, fur and down.

Historical significance: This bed head is a product of the school of Fontainebleau, a flourishing centre for the grotesques in France during the sixteenth century. It is indicative of the wide dissemination of the grotesque across all decorative arts, including textiles. Donald King has noted that it was natural that grotesques, as wall decorations, should make the transition to woven textiles and be employed in wall hangings and bed hangings, including bed heads (King,1987, p.244). This particular example is not a woven pattern.

King identified a fragment of a valance, currently in the Musée des Arts Décoratifs, as having come from this bed head. Further surviving examples of textiles with embroidered grotesques, similar to this one, are a tester with the monogram of Henri II, dated c.1550, in the Louvre and a tablecloth in the Hermitage, St. Petersburg (see references).

The appliquéd hybrid figures that dominate this bed head are a characteristic element of the grotesque, based on monsters derived from classical mythology and antique reliefs. Those shown in this bed head are some of the most favoured: griffons and harpies; animals such as hounds and owls; and anthropomorphs including satyrs, centaurs, sphinx-like figures and phytomorphs.

Elements of these grotesques have been sourced from the engraved works of Jacques Androuet du Cerceau, whose Livre de Grotesques was published in Paris in 1566. The plates were designed to serve as models for artists and craftsmen, du Cerceau directing they should be used 'to awaken their minds and so that each may apply what he finds appropriate to his craft'.(quoted in Brugerolles and Guillet, Paris, 1995, p.58.)

Recent scholarship by Phillipe Morel has encouraged a shift in the traditional art historical reading of the grotesque. Grotesques have long been seen as fantastical and nonsensical products of the artist's imagination, removed from all constraints of a specific iconographical programme. Morel argues that grotesques adhere strictly to antique models and follow a delineated set of principles and rules derived from burlesque literature and other sources, demonstrating an order that would seem at odds with their classification as whimsical caprices. That grotesques proliferated across all forms of the fine and decorative arts during the Renaissance, suggests that their significance has as yet been underestimated and their interpretation in art historical literature still leaves much to be explored.

Morel also draws attention to the 'wunderkammer' effect produced by Renaissance grotesques, and indeed those depicted in this bed head, with its assortment of curious beasts compartmentalised within the strapwork, are reminiscent of a cabinet of curiosities.(Morel, Flammarion, 1997) 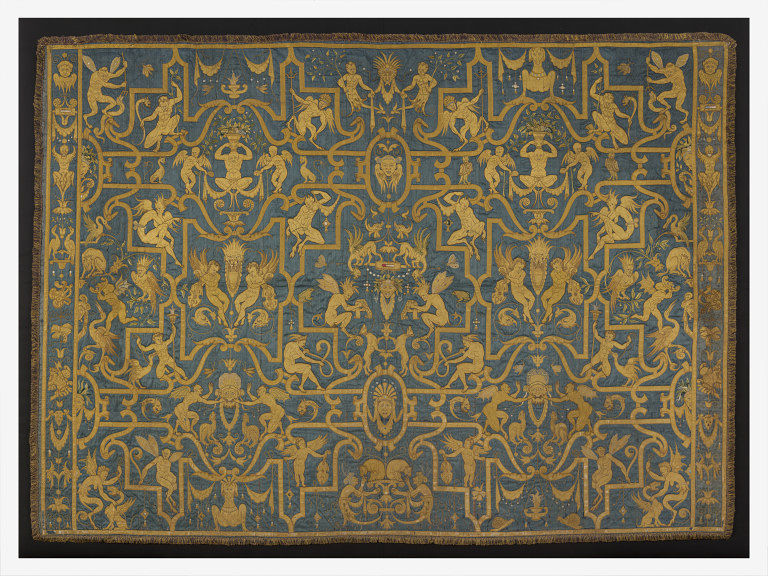