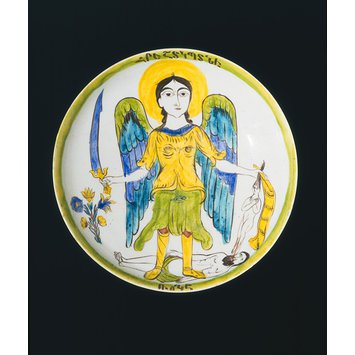 The dish shows the Archangel Michael. In his left hand, he brandishes a sword, and his clothing is probably derived from the armour worn by an Early Christian military saint. It is here shown as though made of cloth, and the breastplate and skirt form an animal mask motif. In his right hand Michael holds a scroll and the soul of the dead man who lies beneath his feet. The soul is depicted as a naked, beardless figure with arms crossed. The rim is inscribed in Armenian with the words, ‘[This] is the Archangel’, and the date 1168 in the Armenian calendar, equivalent to AD 1718–1719.

On the reverse, there is the name of the patron, Abraham Vardapet. He was an Armenian cleric, also known as Abraham of Crete, resident at this time in the Turkish town of Tekirdagh, on the Thracian shore of the Sea of Marmara. He moved to Ejmiadzin in Armenia in 1734, when he became head of the Armenian church as Catholicos Abraham III. The dish was produced in the town of Kütahya in western Turkey, where a group of Armenian settlers were involved in ceramic production. It shows that Armenian merchants and churchmen were the patrons of ceramic production in both Turkey and Iran, where Armenian immigrants lived in scattered communities linked by trade.

Description taken from, Carswell, J & Dowsett CJF, Kütahya Tiles and Pottery from the Armenian Cathedral of St. James, Jerusalem, vol. 1, Oxford, 1972, pp. 68-69
Painted in yellow, green, cobalt blue, turquoise, with touches of red and brownish-black outlines. The transparent glaze has a slight greenish tinge on the base.

The dish shows the Archangel Michael brandishing a sword and holding the soul of a dead man, who lies beneath his feet. St. Michael wears a yellow blouse over a short green robe. The folds of the blouse assume the character of a face, with pointed ears, eyes, nose, and moustache. The ends of the sleeves are shaped like animals' heads, with eyes and small pointed ears. The robe is drawn together between the legs and has a mouth painted on it. St. Michael holds an uplifted sword in his right hand; the sword is of the yataghan type, with a trefoil guard. He wears greaves and stitched footwear revealing the toes. In his left hand he holds a scroll, and the soul of a dead man, depicted as a naked, beardless figure with arms crossed, streaked with red. The dead man wears a loin-cloth; his eyes are open, he has a forked beard, and his feet appear bound together. on the left is a bunch of brightly coloured flowers. The rim is inscribed at top and bottom in Armenian, in black on a green border.

The back of the dish is painted with four sprays of blue flowers and leaves of different types, with four smaller sprays between them. An inscription in Armenian bolorgir is painted in black across the base.

Kütahya (probably, made)
Turkey (made)

(This) is the Archangel

Michael brandishes a sword with one hand. With the other, he holds the soul of the dead man at his feet. Michael's breastplate takes the form of an animal mask. This design was derived from images of ancient Roman armour in European printed books. The inscription in Armenian reads, 'This is the Archangel'. 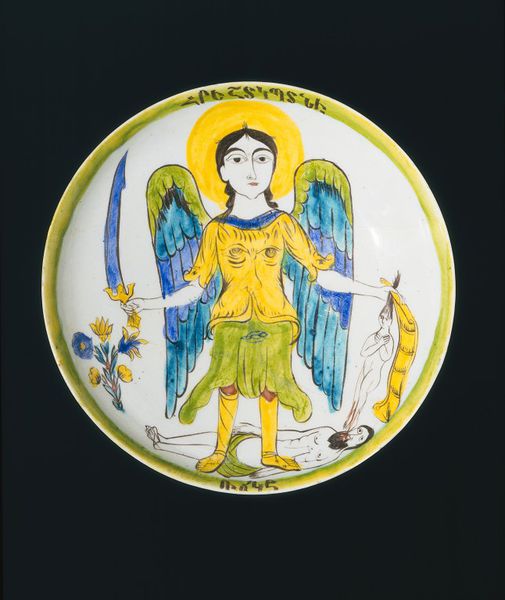