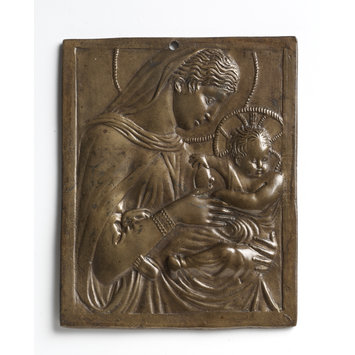 Small, portable bronze plaquettes like this one may have been used for personal devotion in fifteenth century Italy, and were also collected by princes and scholars.

Images of the Virgin and Child were believed to have talismatic and protective properties. Some compositions, particularly those associated with miracle-working images, became very popular and were widely reproduced.

Donatello was probably responsible for the original design of this example, and this plaquette may have been made in his workshop. Other versions of the plaquette still exist, and the design was also copied in other media, including silver and terracotta. There is a stucco relief in the V&A collection (museum number A.45-1926) with the same design, which was probably cast from another, earlier version of the plaquette.

The Virgin and Child, bronze plaquette. The Virgin, half-length, turns her face in profile to the right, holding on her left arm the Child, who is baring her breast with his right hand. Plain cable-like aureoles. Flat rim. Pale patina.

Historical significance: Images of the Virgin and Child were believed to have talismatic and protective properties. Some compositions, particularly those associated with miracle-working images, became very popular and were widely reproduced.

Plaquette, bronze, The Virgin and Child, after Donatello, Italy (Florence), about 1450 (based on an earlier design) 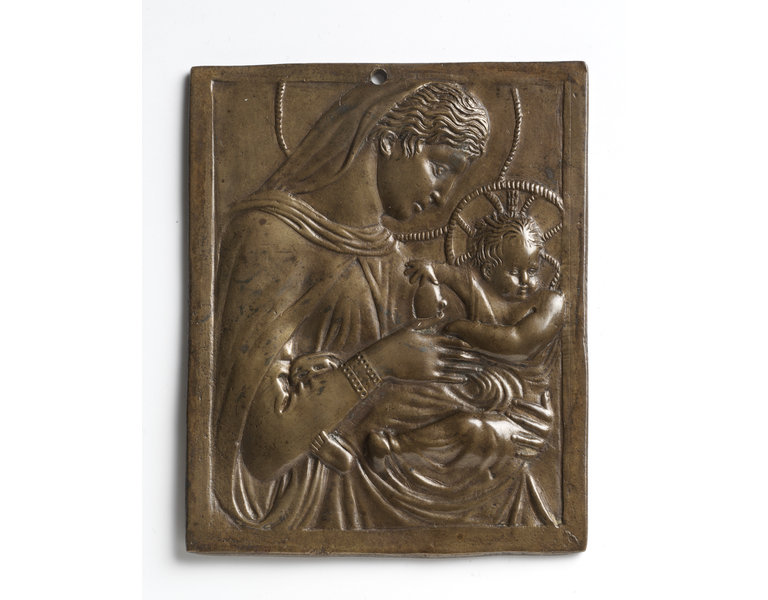