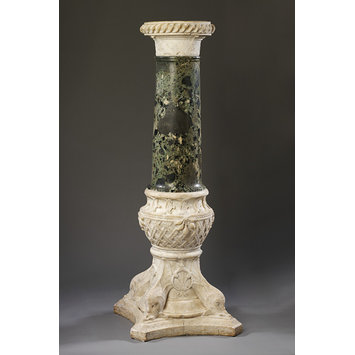 The decoration at the base combines the devices of two important Florentine families of the Renaissance: the ring with feathers of the Medici, and the poppy heads occasionally used by the Rucellai. Made for the support of a sculpture, the column may have been commissioned to celebrate a marriage between these two powerful families, perhaps that in 1466 of Bernardo Rucellai and Lorenzo de' Medici's sister Nannina. The column passed into the ownership of the Salviati family until the middle of the nineteenth century and was perhaps housed in the Villa Salviati at Ponte alla Badia (Florence).

The circular moulded base of the column rises from a pedestal with four concave sides which meet at squared-off corners. It is ornamented with four dolphin heads which rest on the corners of the pedestal beneath. Between each pair of dolphin heads is carved a Medici ring enclosing a feather flanked on either side by a poppy-head. Above is a wickerwork basket, from whose rim hang four clusters of poppy-heads, and at whose top is a circle of interlaced Medici rings with diamonds terminating in ball-shaped points. The verde antico shaft of the column is topped by a white marble capital carved with scrolls, leaves and flowers.

Purchased by J.C. Robinson in Florence (vendor not recorded) in 1882. A letter from Robinson printed in The Times 24 October 1883, states that the column was brought from a Villa of the Salviati family in the neighbourhood of Florence "Still in their possesion". It is possible that the villa referred to by Robinson was the Villa Salviati at Ponte alla Badia, which passed out of the heirs of the Salviati family in 1844 but has continued to be known as the Villa Salviati.

Maclagan and Longhurst identify the emblems on the base as "a combination of the 'Medici ring' and the poppy-head emblems of Bartolini-Salimbeni family", on the analogy of a terracotta roundel formerly at Diacomano, now in the Bargello, which bears the Medici device of three feathers issuing from a diamond ring with the motto SEMPER in combination with the Bartolini -Salimbeni device of three poppy-heads issuing from a diamond ring with the motto PER NON DORMIRE. The roundel is associated by Marquand with the marriage of Bartolomeo di Andrea de' Medici and Alessandra di Leonardo Bartolini-Salimbeni. The Bartolini-Salimbeni emblem shown on the roundel appears on the palace built in 1517-1520 for Giovanni Bartolini (1472-1544), but differs from that on the pedestal where two poppy-heads and a central feather are shown. The Medici ring with feathers appears on the Palazzo Rucellai , which was built by Giovanni Rucellai (1403-81), and poppy-heads were among the devices used by this family. There is thus a possibility that the pedestal was commissioned by Giovanni Rucellai or by his son Bernardo (1448-1514), whose marriage to Nannina, sister of Lorenzo de' Medici, took place in 1466. The form of the basket and the dolphins on the base would be consistent with a dating circa 1470-5.

Marble pillaged from antique sites became a ‘primary resource’ in the area around Rome, and formed the basis of medieval Rome’s only real industry. With a little adaptation, column shafts and to some extent bases and capitals could be used to give new buildings and ornaments a substantial claim to antiquity. The prized stones could also be sawn up for use as panels for screens, parts of liturgical furnishing and as architectural cladding. Columns made of porphyry and verde antico were sawn into slices to be used as coloured stone disks (rotae) that served as a starting point for ornamental floor patterns.

Around the base appears the medici ring with feathers in conjunction with two poppy heads; both devices were used in the fifteenth century by the Rucellai family and there is a possibilitiy that the column was commissioned by Giovanni Rucellai (1403-81) or his son Bernardo (1448-1514), who married Lorenzo de Medici's sister Nannina, in 1446. The column passed into the ownership of the Salviati family until the middle of the nineteenth century and was perhaps housed in the Villa Salviati at Ponte alla Badia (Florence). The three dowel holes in the top of the column indicate that it was designed to support a sculpture. [1995] 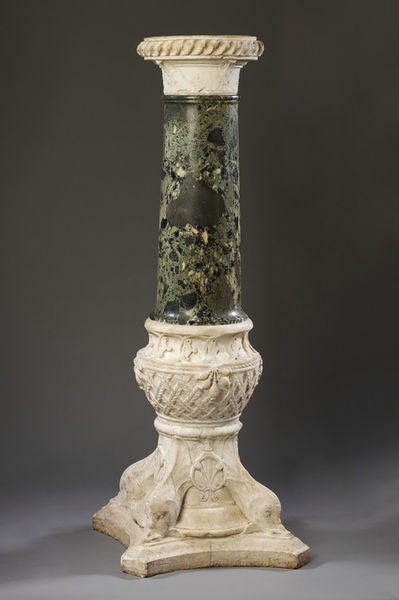