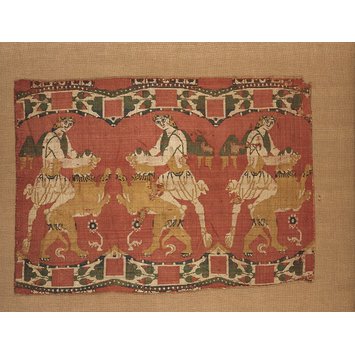 Woven silk with 'lion-strangler' design; silk compound twill. The design is composed in horizontal rows: in the middle row, the focus of the design, a figure strangling a lion is reproduced facing alternately to left and right; above and below an undulating border of pattern frames the figurative design. The colours used are dark blue, green, yellow, red and white on a red ground.

Historical significance: This object is important because it shows the type of scene which probably influenced Romanesque art. It is also typical of the collecting of Canon Franz Bock.

Imagery
The scene represents the symbolic theme of man's victory over animals: a hero or gladiator wrestles with a lion. The man is depicted in Hellenistic-Byzantine style and wears a classical short tunic, a chlamys or cloak fastened at one shoulder, and a pair of sandals. This outfit might point to a gladiator for the circus. However, the figure portrayed may also be that of one of the heroes from the Old Testament, Samson or David, or Hercules from classical mythology. Potentially, it could therefore satisfy the Judeo-Christian or pagan observer. These identifications were first suggested by Wolfgang F. Volbach, and then repeated by various scholars (e.g. C. Delvoye in 1969). The design looks back to classical prototypes, and its model may have been one of the labours of Hercules. However, the typical attributes of the classical hero are absent: the beard, the lion skin, and club. The figure is not likely to be Daniel as his arms are not raised as orant, as in traditional depictions. The most likely argument for Samson as the figure was presented by Marie Risselin-Steenebrugen in 1981.

Extant examples
Medieval, Byzantine features are present in the rather rigid and ungainly stance of the combatants and the stylised floral forms. The broken circles above and below the figures suggest that the design was adapted into a frieze from a series of roundels, a common method of composition used in both Byzantine and Near Eastern textiles. The border pattern has been arbitrarily broken by the scalloped arrangement, so that it is incompletely shown: it represents a rose-stem with blossom and two buds. This design, which is frequently found on early medieval silks, was a stylised development of the naturalistic floral forms used in the late classical period.

At least seven textiles of so-called 'lion strangler ' or 'Samson' silks have been found in Western Europe, mostly in a religious context. Their precise function is not however known. The choice of design might have been religious or superstitious. The survival of several silks with similar yet different patterns suggests that they must have been in considerable demand, probably from the rich and powerful. The designers were most likely either trained in the Byzantine tradition or strongly influenced by it. There are slight stylistic variations between designs on other silks of this type which may indicate that several workshops were weaving similar designs.

These silks are the product of Byzantium and the Islamic Near East which played a predominant role in textile production and trade in the Mediterranean until superseded by Venice in the 13th century. Two basic interrelated factors led to this role: maritime supremacy in the Mediterranean and the conquest of Constantinople in 1204.

Collecting context
It formed part of the collection of the German collector, Canon Franz Bock (1823-1899), a major figure among collectors of the second half of the nineteenth century. He bought or received fragments of medieaval silk from many ancient cathedrals and religious foundations and then sold them to major public collections in Europe - the South Kensington Museum, Paris, Lyon, Vienna and Berlin. As a result, there are often pieces form the same silk in widely separated places.

Silk with as scene of a figure wrestling with a lion, possibly Syria, 780-900

These types of silks were made in several centres around the east Mediterranean area. This and the related piece were found in the Cathedral of Chur in Switzerland. 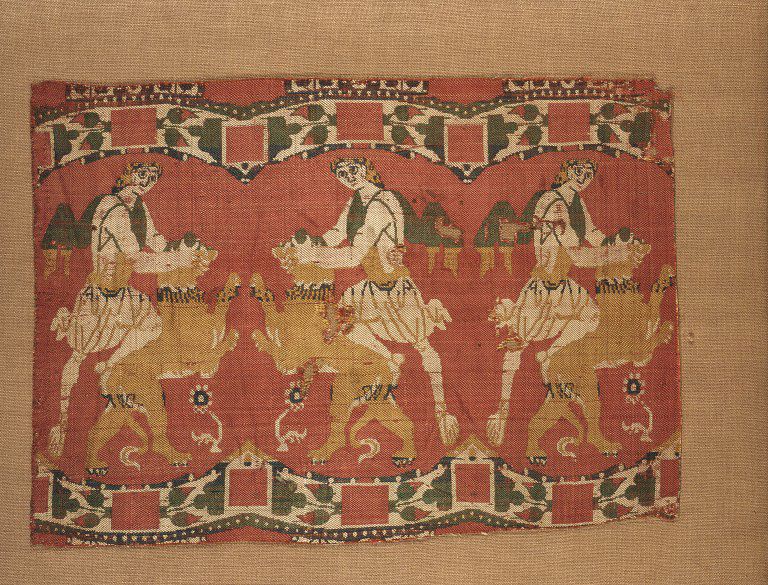