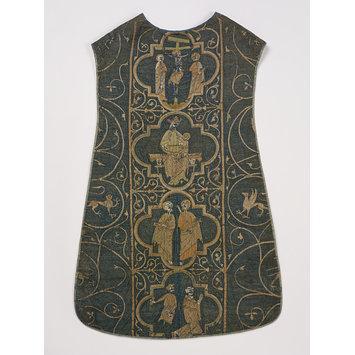 The chasuble is the principal vestment worn by the priest when celebrating Mass. This example has been drastically cut down from its original voluminous shape to suit changing fashions in church ritual. It is made of luxurious materials, with a silk satin ground and rich embroidery, and is known to have belonged to an illustrious family. The embroidery is carried worked in underside couching, split stitch and laid and couched work.

Stylistically the embroidered motifs can be seen as a mixture of Romanesque and Gothic. The scroll work and figures of griffins look back to the earlier style, while the quatrefoils enclosing Christian scenes belong to a decorative scheme with repeating geometric motifs which were standard in English medieval embroidery (known as opus anglicanum, the Latin for English work) from the mid 13th to the early 14th century.

This 'fiddle-shaped' chasuble is made of blue silk and cotton in a satin weave, embroidered with silver-gilt and silver thread and coloured silks in underside couching, split stitch and laid and couched work.

On the back a wide vertical band is decorated with four barbed quatrefoils containing Christ Crucified, with the Virgin and St. John; the Virgin and Child; SS. Peter and Paul; and the Stoning of St. Stephen. Between the quatrefoils, stiff scroll work is reminiscent of the wrought iron hinge straps of medieval doors. The main ground of the vestment is decorated with vigorously drawn but delicate foliate scroll work enclosing lions and griffins.

Embroidered with silver-gilt and silver thread and coloured silks in underside couching and split stitch, with laid and couched work, on blue satin with silk warp and cotton weft reinforced with linen

Originally with coats of arms relating to marriage of Margaret de Clare and Edmund Plantaganet, Earl of Conrnwall, in 1272

The has been cut down from a voluminous circular garment like that worn by St. Stephen in the lowest quatrefoil on the back into a shape that became popular from the 17th century onwards.This shape no longer makes use of the soft, fluid qualities of the silk which has been backed on linen. The join down the centre front is covered by a band of sixteenth-century bobbin lace. It is not clear at what time this modification was made, but it is clear that garment was originally a chasuble because of the layout of the surviving orphreys on back and front.

Evidence from written sources suggests that part of the ground fabric which was cut from the sides of the chasuble, appears to have been used to make a stole and maniple which were additionally decorated with four shields of arms. Although the stole and maniple are now lost, the fact that armorial shields were once part of the chasuble is supported by the remains of a tiny section of one shield (probably that of Lacy) at the upper, right hand edge of the back, and the presence of a strap (from which a shield once hung) draped over a scrolling stem by the neck edge of the left front. These were described in 1786 by the then owner of the chasuble, David Wells, FSA, of Burbach (Burbage), Leicestershire, in a letter to The Gentleman's Magazine: 'The four coats are embroidered on a piece of very rich silk, in which are interwoven flowers and griffins in gold, at the bottom and corners whereof the shields are finely wrought in needle-work, the gold and silver yet fresh, the other colours much faded, as is the stuff itself'. The arms were those of Clare, Cornwall, Lacy and England and they enable the chasuble to be dated very precisely. They stand for Margaret de Clare, who married Edmund Plantagenet, Earl of Cornwall, in 1272. The arms of Lacy relate to her mother and those of England are a reference to her husband's royal descent as nephew of Henry III. The marriage remained childless and ended in divorce in 1294.

The early history of the chasuble is not known. David Wells acquired it from 'a gentleman in Wales' and it subsequently passed through the hands of his nephew, Ambrose Salisbury, John G. Nichols, FSA, and John Bowyer Nichols. It was bought by the Museum at the latter's sale, 28th June, 1864 (lot 160).

Historical significance: The Clare chasuble is the earliest recorded example in which the silk embroidery of the faces follows the contours of the features, with the cheeks being worked in indented spirals. Although here distorted by wear, other examples show the depth of feeling that could be conveyed by this technique. It is also, according to Lisa Monnas, the only known dated example in existence of this type of fabric, which was identified by Donald King as a kanzi (Arabic), woven in Iran.

Garment
The chasuble is the main ecclesiastical vestment worn by priests for the celebration of Mass. It is usually made of luxurious materials (silk in a variety of weaves) which draped fluidly over the body. Before 1600, it was bell-shaped, similar to a cope, but different in being a completely closed garment (i.e. sewn into a near circle with only a hole for the head left). The cope in contrast was open down centre front and therefore was an obvious semi-circle when laid out flat. The ophrey bands - when it had them - were centre front and back (as opposed to a single band down the opening as in the cope). Both derived from the Roman paenula (cloak).

Decoration
In its decoration the chasuble is a transitional piece. The scroll work looks back to an earlier style, while the quatrefoils enclosing pictorial motifs belong to a decorative scheme based on repeating geometric shapes which was standard in Opus Anglicanum from the mid-thirteenth to the early fourteenth century (see the Syon Cope).

An apparently similar vestment was recorded at Exeter cathedral in 1506: ‘A chasuble of blue satin, worked with large knots, griffins and lions in gold, and on the back figures of Christ crucified, the Blessed Virgin and John, and other figures in gold’. Slightly earlier embroideries with lions and griffins in foliate scrolls have been found in the tombs of Archbishop Pierre de Charny (1268-74) and Gilon II Cornut (1274-92) at Sens Cathedral.

Embroidered in England certainly, London probably, the textile being a kanzi (silk and cotton mix made in Iran. Attribution Donald King, 1993. 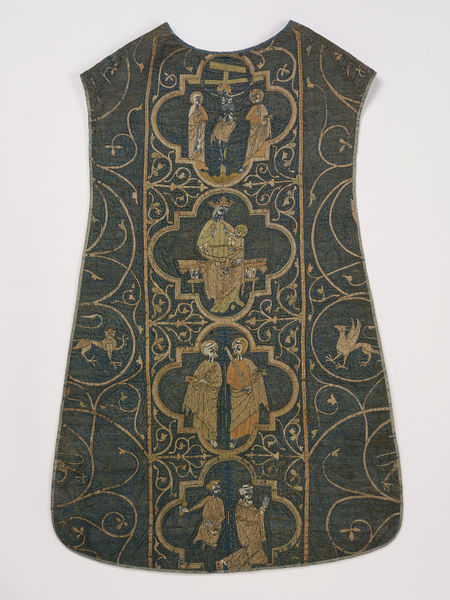