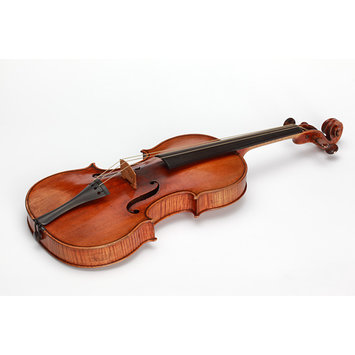 Antonio Stradivari (1644-1737) of Cremona is widely regarded as the greatest violin maker of all time. His reputation rests on the unparalleled quality of the workmanship and design of his instruments as much as the legendary varnish, made according to a long-lost secret recipe (unfortunately, the varnish on this instrument is not original). Stradivari's finest examples date from about 1699, when this violin was made, until about 1720. As well as making violins, Stradivari also made cellos, guitars and mandolins. From about 1660, the violin began to replace higher pitched viols, because it was easier to produce the brisk sounds demanded by the musical fashions of the day.

Belly of two pieces of pine with purfling of two lines black and one light; the varnish is not original. Back of two pieces of sycamore. The neck is later, following modern practice. The head is by Stradivari, though (according to W. Henley, Antonio Stradivari) from another violin.

Antonius Stradiuarius Cremonensis/ Faciebat Anno 1699 [followed by a circle containing a cross and the initial AS]
Antonio Stradivari of Cremona made this in 1699
Label; Latin; inside the body, at the back of the instrument; printed (the last three figures of 1699 in ink)

In 1886 Mrs Mary Cavan (1830/1-1891) of 8 Park Crescent, London, purchased the violin from Edward Withers, 'Violin, Violincello, & Bow Maker' of 22 and 22a Wardour Street, London. He took it for a second opinion to George Chanot, 'Violin, Violincello & Bow Maker' of 157 Wardour Street, and in his report of 14 April 1886 Chanot stated that 'The violin shown to me this day by Mr Edward Withers I recognise as a genuine Stradivarius. The Belly of the Instrument has been revarnished the head is a Genuine Stradivarius head but I do not believe that it belongs to the same Instrument.' Mr Withers wrote to Mrs Cavan on 14 April: 'I have shewn the "Strad" Violin to Mr. Chanot, & enclosed you will find his written Opinion, for which I paid One Guinea. I quite agree with what he states, that it is a genuine Stradivarius, the Belly of which has been re-varnished or touched up over the old varnish - the Head is a genuine "Strad" head but does not belong to the Body - the tone is excellent. The lowest price I can let you have it for is £[ . . . ( . . . Pounds.) please let me have your decision at once & oblige.' Mrs Caven was the mother of Beatrice Mulgan, who bequeathed the violin to the Museum.

A more recent opinion is that the head is of good quality and consistent with Stradivarius violins of the 1690s, although it is perhaps a little heavy for this particular instrument. The tips of the corners of the left-hand bouts had been replaced but those on the right hand are considered remarkably intact. The neck, fingerboard and tailpiece are now thought to be nineteenth-century replacements, and the tuning pegs may be early twentieth-century replacements.

During the 17th century violins grew in status and popularity. Rich-toned, expressive and versatile, they were both virtuoso solo instruments and the core of the new orchestras. Violins made by the Italian maker Antonio Stradivari are considered the finest ever produced. They are prized for their design, craftsmanship and tone. 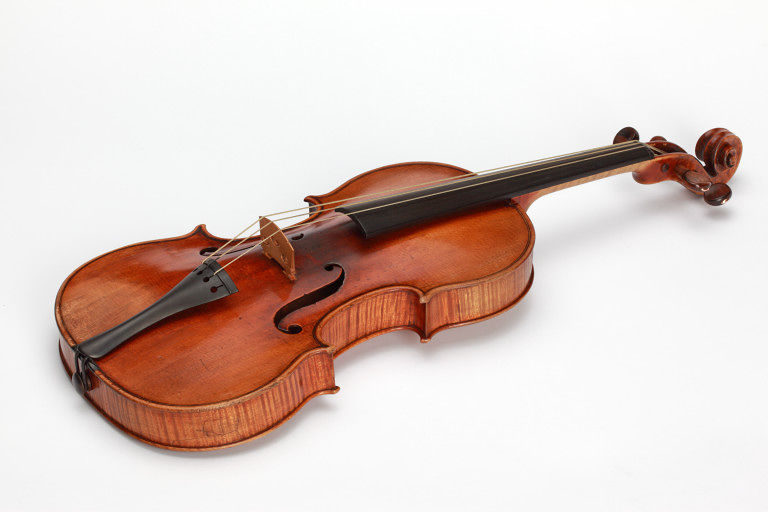