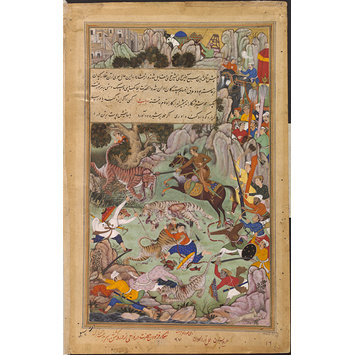 This illustration by the Mughal court artists Basawan and Tara the Elder to the Akbarnama (Book of Akbar) depicts the Mughal emperor Akbar (r.1556–1605) slaying a tiger near Narwar, central India, in 1561. The royal entourage disturbed a female tiger, who sprang out from the forest and lashed out to protect her five cubs. The emperor’s companions were said to have frozen in terror, but the emperor reacted instantly, killing the tigress with one blow of his sword. His men then killed the five offspring. The event is depicted over two pages, the other page being Museum no. IS 2:18-1896. The image is overlaid by a Persian text panel.

Painting, in opaque watercolour and gold on paper, this is the right side of a double composition, and depicts Akbar slaying a tiger near Narwar, Gwalior in 1561. The action takes place in the clearing of a hilly wooded landscape with several other men joining the hunt. The image is overlaid by a panel of Persian text (four lines) on the left-hand side of the page.

The Akbarnama was commissioned by the emperor Akbar as the official chronicle of his reign. It was written by his court historian and biographer Abu'l Fazl between 1590 and 1596 and is thought to have been illustrated between about 1592 and 1594 by at least 49 different artists from Akbar's studio. After Akbar's death in 1605, the manuscript remained in the library of his son, Jahangir (r. 1605-1627) and later that of Shah Jahan (r.1628-1658). The Museum purchased it in 1896 from Mrs Frances Clarke, the widow of Major-General John Clarke, who bought it in India while serving as Commissioner of Oudh between 1858 and 1862.

Historical significance: It is thought to be the first illustrated copy of the Akbarnama. It drew upon the expertise of some of the best royal painters of the time, many of whom receive special mention by Abu'l Fazl in the A'in-i-Akbari ("Institutes of Akbar"), the third book of the Akbarnama. The inscriptions in red ink on the bottom of the paintings refer to the artists and indicate that this was a royal copy.

Outline picture and portraits painted by Basawan, colours and details painted by Tara the Elder. Attribution place is likely to be Delhi, Agra or Fatehpur Sikri. 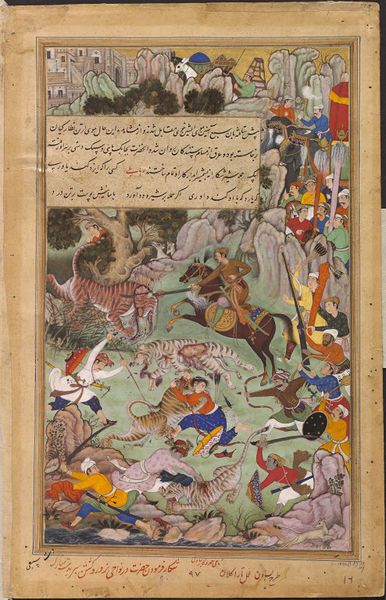