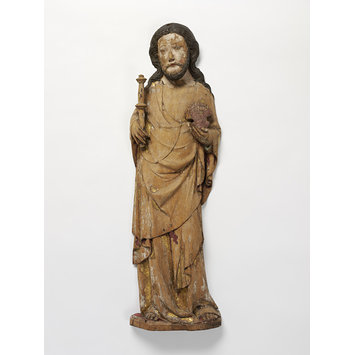 This carved oak relief shows the apostle Saint James the Greater, and was made in ca. 1350-1360 in Lower Saxony, Germany. Together with three other reliefs now also at the V&A, it originally belonged to a winged altarpiece in the Johanneskirche in Lüneburg, which was dismantled in 1856.

In its centre, this altarpiece probably displayed a sculpture showing the Coronation of the Virgin, which now is in the Museum Lüneburg. Two other figures belonging to the altarpiece are now preserved at the Niedersächsisches Landesmuseum, Hanover, and one is still displayed in the Johanneskirche itself. It is likely that the relief of Saint James the Greater and its three companion pieces at the V&A, all remarkably shallow, once decorated the altarpiece's wings.

This carved oak relief shows the standing figure of Saint James the Greater. The apostle, rendered with beard, long wavy hair and floating robes, can be identified through his attributes. In his right hand, he is holding a pilgrim staff, now partially lost, and in his left, a scallop. The carving has lost much of its original colouring, but traces remain on the saint's face, hands and hair, and some original gilding as well as later blue overpainting is visible on his robes. The back of the relief is hollowed out, and the figure has a plugged circular bore-hole in the top of the head.

This relief is one of a group of four owned by the museum. The other three show Saint Simon (mus. no. 4846-1856), The Virgin Annunciate (mus. no. 4847-1856) and the Archangel Gabriel (mus. no. 4848-1856), with the latter two forming an Annunciation scene. The reliefs originally belonged to a now dismantled altarpiece in the Johanneskirche in Lüneburg. Much of the church interior was sold and dispersed in 1856, the same year the V&A bought the four reliefs - perhaps at a sale in London at Phillips, New Bond Street, on 27 June 1856 (lot 88, described as 'Four gothic figures of Saints').

It is likely that the relief of Saint James the Greater and its three companion pieces at the V&A, all remarkably shallow, once decorated the wings of the altarpiece in the Johanneskirche in Lüneburg. In its centre, the altarpiece probably displayed a sculpture showing the Coronation of the Virgin, which now is in the Museum Lüneburg, flanked by a sculpture of Saint John the Evangelist which is still kept in the Johanneskirche itself. Two further reliefs once belonging to the altarpiece and showing Saint Bartholomew and a saintly abbot are now at the Niedersächsisches Landesmuseum, Hanover.

Catalogue of the Finely Inlaid Oak & Sculptured Marble Fittings of The Church of St. John, at Luneberg [sic!], Comprising The Staircase for the Pulpit, Carved Frames & Monuments, Doors, Friezes, Panellng &c. Auction Catalogue, Mr. Phillips, New Bond Street, 27 June 1856 (London: J. Davy & Sons, 1856), p. 5, lot 88
'Objects Acquired in the Year 1856', in Inventory of the Objects in the Art Division of the Museum at South Kensington, Arranged According to the Dates of their Acquisition. Vol I: For the Years 1852 to the End of 1867 (London: Printed by George E. Eyre and William Spottiswoode for H.M.S.O., 1868), p. 23
Habicht, Victor Curt. Niedersächsische Kunst in England (Hannover: Edler & Krische, 1930), pp. 88-91 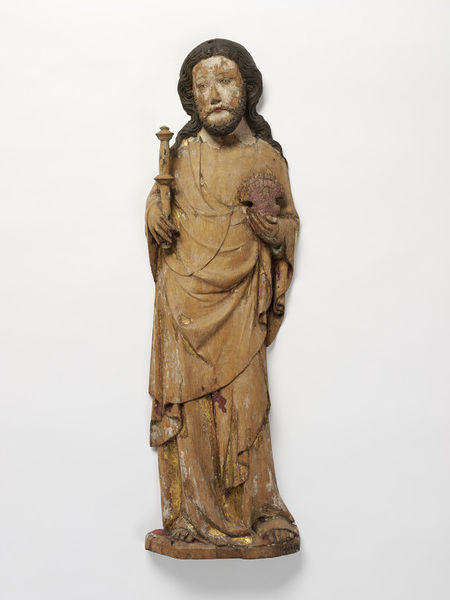