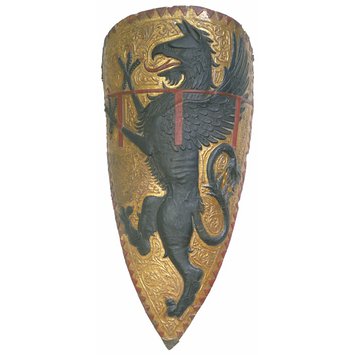 This shield is emblazoned with a griffin, a mythical beast that formed the coat of arms of the Villani family of Florence, who made their money in the wool trade in the years after 1300. I The shield was made for display rather than protection and it would have been carried by family retainers at processions and pageants staged in the city at the time. Until the 1460s, Florence was an oligarchic republic, where various merchant families vied with each other for supremacy. The theme of this shield is heraldic and serves to emphasise the importance of this particular family.

Shield made of wood covered with painted and gilt gesso on the outside and leather on the inside, charged with the arms of the Villani family of Florence, a "griffin rampant sable with a label of three points gules, within a bordure engrailed with gules" (Hayward:European Armour: "gules" is a heraldic term for red). The griffin is composed of thickly built up gesso painted black or dark blue set in a gilt gesso scrolled background. The border is indented with red dog-tooth patterns. According to the early museum records, there was no trace of an arm loop but three nails remained, presumably on the inside.

Painted and gilt gesso on wood, lined with leather

arms of the Villani family of Florence 'Or, a griffin rampant sable with a label of three points gules, within a bordure engrailed gules'.
Shield face

The South Kensington Museum bought this shield in 1865 for £40 from William Blundell Spence, a Fiesole-based English dealer who had acquired it from the Palazzo Guadagni in Florence. The shield originally belonged to the Villani, a family of prominent wool merchants, who from the 1470s were known for their hostility towards the Medici, the leading family of Florence of the day. By about 1600, Lorenzo di Pietro Villani (died 1617) dealt in silk in partnership with the Guadagni family, and this may explain how this shield ended up in their residence.

Historical significance: Parade shields like this example were ephemeral: they were made of cheaper materials and once they were no longer needed, they were usually dispersed or discarded. This example is therefore a very rare survival of an important part of civic life in the Italian city, that would have provided the leading families with prestige, the masses with entertainment and prominent artists with an important source of earnings.

Wooden shields like this example were used for parades, cavalcades and carnivals in 15th century Florence, rather than protection in battle, and were aimed to show off the prestige of a family. Although the Medici and their supportes were the leading faction for much of this century, Florence remained an oligarchic republic, where families vied with each other for honour and prestige. Large, prominetly displayed heraldic shields played an important part in this process.

Kite or long heater shield made of wood covered with painted and gilt gesso, charged with the arms of the Villani family of Florence, from the Palazzo Guadagni, Florence, mid 15th century.

In medieval Italy, as often in Northern Europe, the wider streets of cities were the constant scene of pageant and procession. The functions of Trade Guilds, the reception of a conquering prince, or a marriage of convenience between wealthy families, offered many popular occasions for display Caparisoned cavalry and the brilliant costumes of orders, as well as pennon and cognizance, became the accents of such spectacles. They found a literary counterpart in the Triumphs of Petrarch (d. 1374), and were a familiar theme of illustration in Italian art.

This shield of Wood is painted on gesso, the griffin in black and the ‘label’ in red, on a gilt ground. It is a processional version of a type used in war and in the military sports known as jousting tournaments, as on a smaller scale in the ‘shields’ of heraldry. The Villani, whose arms it bears, were a Florentine family and made their money in the Wool trade in the fourteenth century. They became extinct in 1617. Several members of it were prominent in the affairs of the Guilds (Arti) towards the end of the ﬁfteenth century. The shield, dating about that time, was probably made for a mercantile or civic ceremony.

The rendering of the griffin here was perhaps suggested by near eastern textiles, a highly portable and practicable source of subjects and style. Like many of the beasts of early European heraldry, it owes its spirit and decorative vigour to the stylized animal forms of Near Eastern Art.

The Shield was formerly in the Palazzo Guadagni at Florence and was bought for the South Kensington Museum in 1865, when the Italian collections were being brought together.

Parade Shield with the arms of the Villani family of Florence
Unknown craftsman
c.1450-1500

This parade shield was created for display rather than actual use but would echo military paraphernalia. Hanging in the sala, its visual effect would have been imposing. Family arms appear prominently on many domestic objects during this period, enabling strong statements about lineage and status to be projected within the interior.

The Villani family of Florence were wealthy wool merchants. This rare surviving shield is large enough to conceal a man's whole body, but its flimsy wooden structure suggests that it was just carried at public events to display the family's power. When not in use, it would have hung in the main reception room, or sala.

From the Palazzo Guadagni, Florence