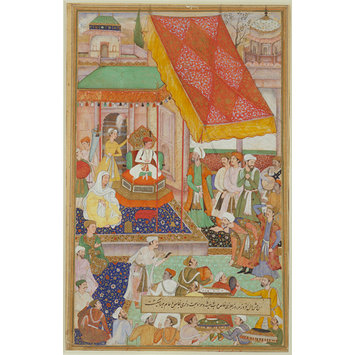 This is part of a double-page illustration from the Akbarnama (Book of Akbar). It depicts the marriage festivities of the son of Maham Anaga, the foster-mother of the Mughal emperor Akbar (r.1556–1605). Maham Anaga held a powerful position at court, as shown by her dominant position in the painting, sitting next to Akbar. An accompanying painting, Museum no. IS.2:8-1896, illustrates dancers and musicians performing in the celebrations. The Mughal court artist La’l was responsible for the design of the two-page composition, with Sanwala painting the details of this half.

Painting, in opaque watercolour and gold on paper, festivities at the marriage of Baqi Muhammad Khan, the eldest son of Maham Anaga, at the court of Akbar in 1561. The young Akbar is seated in the royal pavilion next to Maham Anaga, his foster mother.

'tarh La'l/amal Sanwala'
'Composition [by]La'l/Work of [ painted by] Sanwala.'
Contemporary librarian's attributions in Persian, in red ink in the margin below the painting.

The Akbarnama was commissioned by the emperor Akbar as the official chronicle of his reign. It was written by his court historian and biographer Abu'l Fazl between 1590 and 1596 and is thought to have been illustrated between c. 1590 and 1595 by at least forty-nine different artists from Akbar's studio. After Akbar's death in 1605, the manuscript remained in the library of his son, Jahangir (r. 1605-1627) and later Shah Jahan (r. 1628-1658). The Victoria and Albert Museum purchased it in 1896 from Mrs Frances Clarke, the widow of Major General Clarke, an official who had been the Commissioner in Oudh province between 1858 and 1862.

FESTIVITIES AT COURT
Illustration to the Akbarnama
Opaque watercolour and gold on paper
Composition by La’l, painting by Banwali the Younger (right) and Sanwala (left)
Mughal, c. 1590-95
IS.2:8-1896 (right), IS.2:9-1896 (left)
In 1589, Akbar commissioned the great scholar Abu’l Fazl to write the Akbarnama, or Book of Akbar, as the official history of his reign. The incomplete manuscript to which these folios belong was the presentation copy for the emperor. This scene shows the marriage festivities of the son of Akbar’s wet-nurse, Maham Anaga, in 1561. Her powerful position at court is emphasised by the fact that she is permitted to sit in the emperor’s presence. []

Composition by La'l, colours and details painted by Sanwala.
Attribution place is likely to be Delhi, Agra or Fatehpur Sikri. 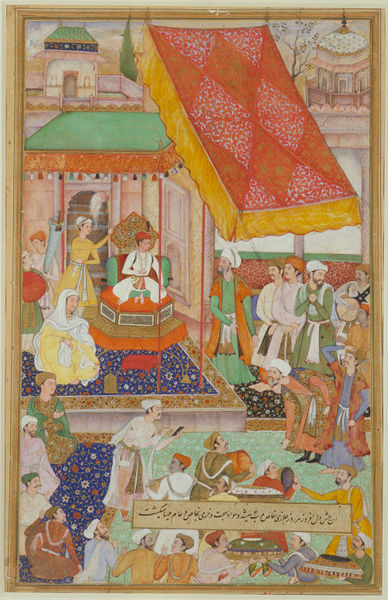