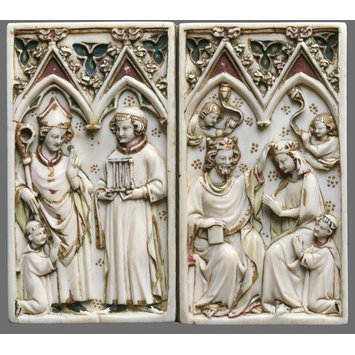 This is a devotional booklet in ivory with painted and gilded leaves, made in Germany (probably Cologne), in about 1330-1340. The covers show the Coronation of the Virgin as Queen of Heaven and two saints, one of them St Lawrence. The small kneeling monk probably represents the booklet’s owner. The images give a full account of Christ’s Passion, as well as the instruments with which he was tortured. They suggest a programme of systematic contemplation and prayer.

Ivory booklets of this type, with painted imagery on the inner leaves, do not survive in large numbers, but include a splendid example in the Metropolitan Museum of Art in New York, one in the Museo Nazionale Ravenna and one in the Bayrisches Nationalmuseum Munich.

The booklet is made of two outer ivories, both carved, and six considerably thinner panels inside, held together with a glued parchment spine. The front cover shows the standing figures of Saint Lawrence and a bishop or archbishop with a kneeling monk (perhaps an abbot) at his feet; the back is carved with the Coronation of the Virgin with two censing angels above and the same kneeling monk - undoubtedly the owner of the booklet - as on the front. The insides of the two outer panels and both sides of each of the six internal leaves are painted with ten scenes of the Passion of Christ and four showing the Instruments of the Passion (Arma Christi) in the following order: The Last Supper, the Betrayal, Christ before Pilate, Christ before Herod, the Flagellation, Pilate Washing His Hands, the Carrying of the Cross, the Crucifixion, the Resurrection and the Vera Icon. The first of the final four panels shows Christ with on of his tormentors and the hand that struck him, the second has the Crown of Thorns, the wound in Christ's side, the bucket of vinegar and the staff with the sponge that was offered to Christ to drink on the cross; the third depicts the cloth with which Christ was blindfolded, the hammer and the three nails with which he was fastened to the cross, the pincers for removing the nails, the thirty pieces of silver for which he was betrayed by Judas, and the three bloody footprints from Christ's journey to Golgotha; the final panel shows a stick, the scourge, the ladder, Christ's cloak and the three dice with which the soldiers gambled for it, the spear, and a view of Christ's tomb from above. The threholes at the top of every other leaf may have been made for the attachment of small silk curtains to protect the miniatures.

Historical significance: The booklet exemplifies the growing use of devotional aids throughout Europe in the fourteenth century. This intensily private approach to worship, wherein a bridge was built between personal feeling and the suffering of Christ and the Virgin grew in popularity from about 1300 onward and was embraced with special enthusiasm in convents.

Devotional booklet, ivory painted and gilded, depicting scenes from the Passion with a cover depicting the Coronation of the Virgin, Germany (probably Cologne), ca. 1330 to ca. 1340 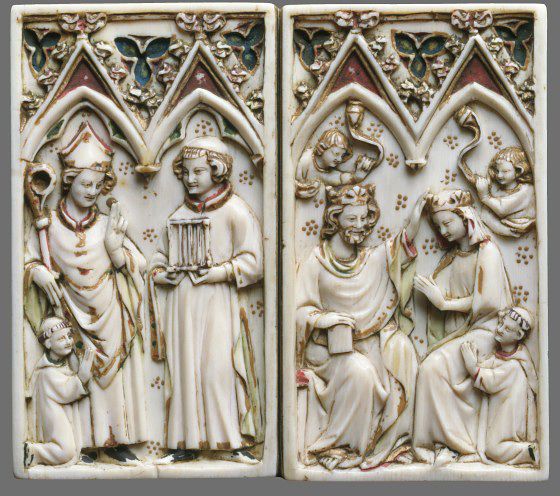