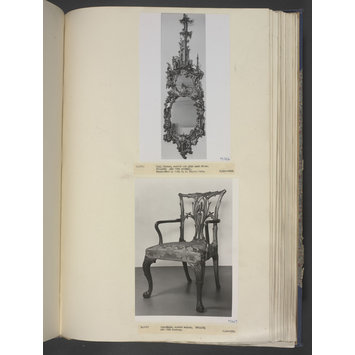 An assymetrical pier glass consisting of a larger oval glass with a smaller oval above framed with carved interlaced scrolls, plants, rocks, icicles and architectural motifs in the 'Chinese' taste with a peasant figure in Chinese costume standing on
ledges of rock. All the interstices of the carving are filled by mirror glass. The mirror is surmounted by a pinnacle composed of elongated architectural forms, rocks, foliage and icicles.

From the Drawing Room, Halnaby Hall near Darlington, formerly the seat of the Milbanke family.

Historical significance: Similar to designs published in 1758 by carver and gilder Thomas Johnson. (See Helena Hayward, Thomas Johnson and the English Rococo, 1964, plate 36.) A chinoiserie figure appears on one of Johnson's designs for girandoles (Hayward, plate 122) and a figure of a peasant in ragged clothes appears in Johnson's design for an overmantel (plate 87). Fountains with a triple cascade of water (plate 94), obelisks (figure 17) and ladders (figure 124) are all characteristic of Johnson's work. Johnson's 1758 book of designs was dedicated to Lord Blakeney, Grand President of the Antigallican Association and sold by Johnson from his premises at 'The Golden Boy' in Grafton Street, St. Ann's Westminster. The book included designs for glass frames, ovals, stands for candles, picture frames, slab frames, an organ, ceilings, chimney peices, brackets for figures, clock cases, girandoles, lanthorns, stands for china, silversmiths, table brackets, stove grates and watch cases.

Giltwood mirror, carved with scrolls, plants, rocks icicles, architectural motifs and a figure in the Chinoiserie style. English (London), 1750-1760 or possibly 19th century. May be based upon designs by Thomas Johnson.

These mirror frames are similar to designs by the carver and gilder Thomas Johnson (1714-1778?). Prior to acqisition by the Museum they hung between the window piers in the drawing room at Halnaby Hall, Yorkshire (demolished 1952), a house with exceptional rococo plasterwork. However, their extreme elongated form suggests that they might date from the 19th rather than the 18th century. [1996]

The pier glass was acquired as one of a pair; the other W.23-1949, although similar in style is not a pair as it is considerably wider.
This mirror and its companion were attributed to Thomas Johnson by Helena Hayward in 1964 (Thomas Johnson and the English Rococo, p.40). There is evidence that George Cole, upholsterer in Golden Square, Soho, supplied looking glasses and girandoles for Paul Methuen at Corsham Court and the Duke of Atholl at Blair Castle in the early 1760s. These were based on Johnson's designs and probably made in Johnson's workshops. At this time Johnson found his workshop in Grafton Street too small and took on additional premises at 10 Tottenham Court Road. One of the mirrors made by Johnson for the Duke of Atholl and supplied by George Cole was originally decorated in white and gold. It would be worth establishing whether George Cole's name occurs in the accounts of the Milbanke family of Halnaby.
Alternatively, it has been suggested that this could be a revival piece made during the 19th century. 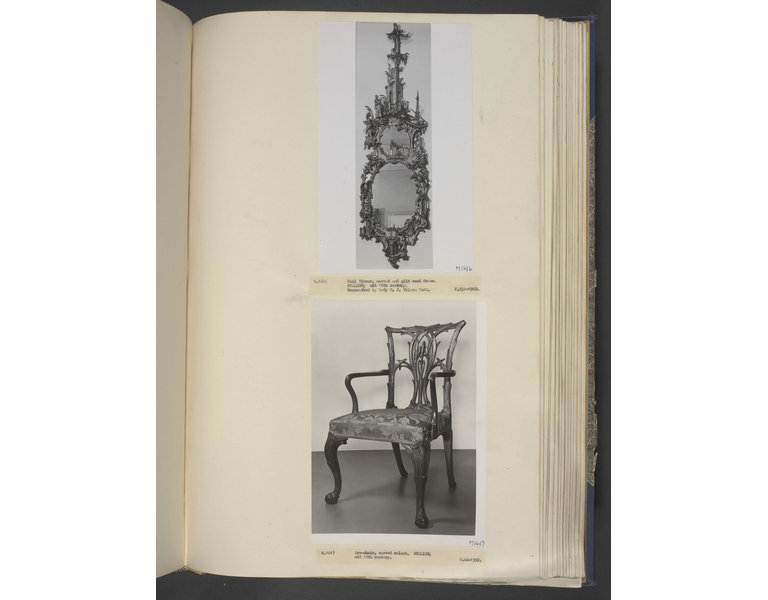