This is an ivory handle of a dagger made in about 1300-1320 in Paris or possibly also Germany, probably Cologne. The corners of this handle are formed by the heads of two women, a monk, and a man whose hair is bound with a fillet. In the centre on each side is the head of a bearded man within a lozenge.

Four other ivory dagger handles of a similar type are known. Daggers with decorated handles, probably more ceremonial than functional must have been made in good numbers in France and Germany in the Gothic period, and it is to be expected that a popular type, once established, would be copied in various workshops. René of Anjou (1409-1480) seems to have possessed an identical dagger to the present example, possibly handed down to him, which is described in a 1471-72 inventory of Angers Castle.
Similar dagger handles may be seen on 14th century effigies on tombs throughout Europe.

Handle of a dagger, the corners of the handle are formed by the heads of two women (one with wimple), a monk, and a youth whose hair is bound with a fillet. In the centre on each side is the head of a bearded man within a lozenge, that on one side also wearing a pointed hat. 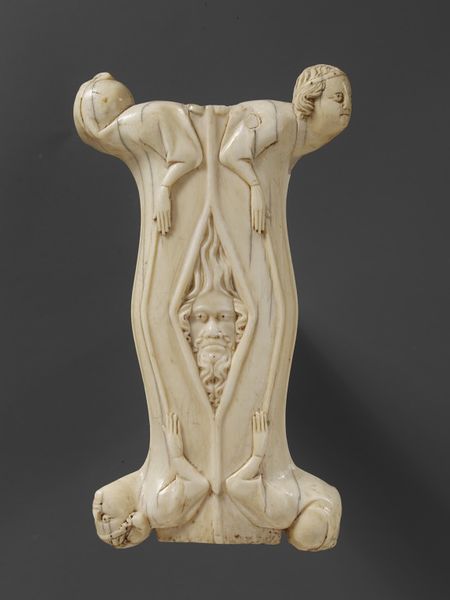