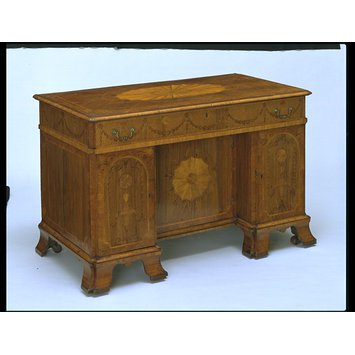 Object Type
This was a dual purpose piece of furniture, combining the functions of a writing and a dressing table. This is a particularly high-quality example with marquetry decoration, or coloured wood veneers. The top drawer is fitted as a dressing table with boxes and a folding mirror, and there are three drawers in the pedestals on either side.

Places
Although there is no documentary proof, this bureau dressing table was almost certainly one of a large group of furniture made by the cabinet-maker Thomas Chippendale (1718-1779) for Harewood House, West Yorkshire. The shape is similar to designs in his book The Gentleman and Cabinet-Maker's Director, and the marquetry is comparable to other furniture he made for Harewood. This commission, from Edwin Lascelles, was the most notable of Chippendale's career. He supplied over £10,000 worth of furniture in the Neo-classical style to furnish interiors designed by the architect Robert Adam (1728-1792).

People
The Lascelles family had made their money through Barbados sugar plantations. As soon as he inherited, Edwin Lascelles commissioned John Carr (1723-1807) of York to design the house, with alterations by Robert Adam (1728-1792). It was newly built when Chippendale supplied the furniture in the 1770s. There is no record of which room this bureau dressing table was made for.

Pedestal dressing-table of pine, oak and mahogany, veneered with rosewood and decorated with marquetry of various woods. On the centre of the top there is an oval containing a fan ornament surrounding a large patera of similar form in sycamore. The borders are of tulip wood. The top drawer forming the frieze is decorated with circular paterae and swags of husks, this ornament continues around the sides. It is fitted with boxes, compartments for dressing and a glass in the centre supported on an adjustable strutt. Below are two pedestal cupboards each enclosing three drawers. The doors are inlaid with husks, paterae and a classical vase within an arched compartment with honeysuckle ornament in the spandrels. In the centre there is a recessed cupboard. The door is decorated with a large scalloped patera edged with husks. Inside the cupboard there is a shelf. There is a cavetto moulding at the base and four shaped bracket feet in front and two behind, which are fitted with large wooden castors on the inner side.

Marquetry of rosewood, tulipwood and other woods, on a carcase of pine, oak and mahogany

It is thought that this table was produced by Chippendale, Haig and Co. for Harewood House, West Yorkshire. The bills are incomplete and like some other pieces from the house this dressing-table is unidentifiable and we do not know for which room it was supplied.

Historical significance: This type of furniture, termed a 'Buroe Dressing Table' is illustrated in Chippendale's Director and other publications of the period.
The Harewood commission was the most valuable of Chippendale's career. He probably supplied more than £10,000 worth of furniture to Edwin Lascelles between 1767 and 1778, including some of the most luxurious furniture produced by the firm.

Bureau dressing table, veneered in rosewood with marquetry decoration. English, ca. 1770. Made by the firm of Thomas Chippendale for Harewood House, Yorkshire.

Chippendale probably supplied more than £10,000 worth of furniture to Harewood between 1767and 1777, including luxurious marquetry furniture. The bills are incomplete so we do not know for which room this piece was supplied. The original colour is now greatly faded. [1996]
British Galleries:
Chippendale's reputation had been established by the quality of his carved furniture in the Rococo style. In the 1760s, Chippendale was quick to develop a new, Neo-classical decoration, using marquetry or paint. [27/03/2003]

The dressing-table has been linked to the furniture provided for Harewood House by Chippendale, Haig & Co. because it so similar in style to documented pieces from the house. 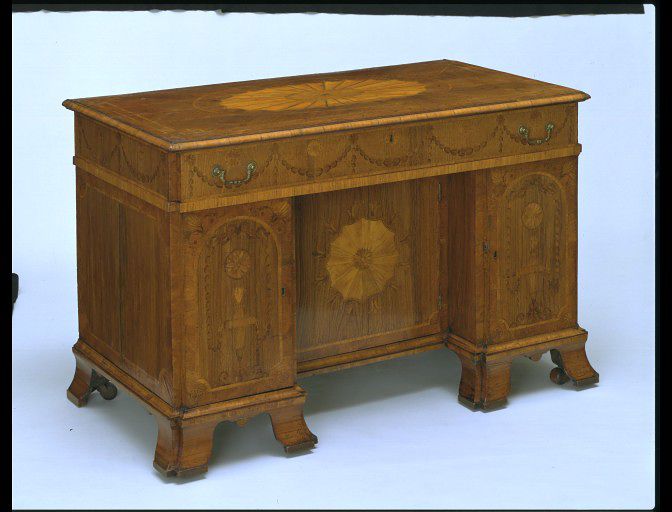