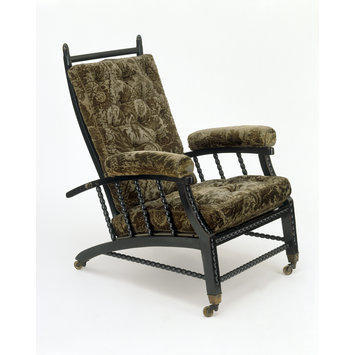 Object Type
Chairs with backs which can be adjusted on a metal ratchet have been made in Britain since the 1670s. Simpler versions of the same type, like this chair, used a wooden rail and notches in the arms. It combines an ebonised finish, evidence of contemporary interest in Japanese design, with bobbin turning on the legs, a traditional technique in English furniture. The original covers are made of 'Utrecht Velvet', a stamped woollen plush sold by Morris and Company for upholstery and for wall hangings.

People
Warrington Taylor (about 1837-1870), business manager of Morris, Marshall, Faulkner & Co., found the country version of this chair in the workshop of Ephraim Colman, a carpenter in Herstmonceaux, Sussex, in 1866. He sent a sketch to Philip Webb (1831-1915) and suggested that it would make a suitable design for the firm. Webb, who designed much of the firm's early furniture, developed Taylor's sketch into the adjustable-back armchair, produced by the firm from about 1869.

Trading
This armchair was one of the firm's popular designs and was available both in this black finish and in mahogany. The illustrated catalogue produced by Morris & Co. c. 1912 shows that loose covers could be supplied either in 'Utrecht Velvet' or in chintz (a printed cotton). The commercial success of the design encouraged other firms, notably Liberty & Co. of London and Gustav Stickley, an American workshop, to produce their own versions.

The design of the chair is based on a vernacular design. The back can be adjusted at different angles by placing a horizontal bar at one of seven positions. The cushions are covered in Utrecht Velvet, an embossed mohair plush, sold by Morris & Co for seat upholstery.

Designed by Philip Webb (born in Oxford, 1831, died in Worth, West Sussex,1915); made by Morris, Marshall, Faulkner & Co.and later by Morris & Co., London Given by Mr. F.G. Carruthers in memory of his sister Mrs. Amy Tozer

Historical significance: The design for this chair was based upon a vernacular version of a late Georgian armchair seen in 1866 by Warrington Taylor, business manager of Morris, Marshall, Faulkner & Co., in the workshop of Ephraim Colman, a carpenter in Herstmonceaux, Sussex. Believing the firm needed new ideas for furniture, Taylor sent a sketch of the chair in a letter to Philip Webb (NAL 86.SS.57). Used in the Kelmscott House drawing room by William and Jane Morris, this popular design which was also available in mahogany, was widely copied by British and American firms, including Liberty and Gustave Stickley.


Sold by Morris and Co. from about 1869 as the "Morris Adjustable Back Chair", this was widely copied on the continent and in America. The design was a copy of a vernacular version of a late Georgian armchair found at Herstmonceaux in Sussex [unknown]
ARMCHAIR
ENGLISH; 1885-1900
Made by Morris & Co., London
Ebonized wood, upholstered with the 'Bird' fabric designed by William Morris

Sold by Morris and Co. from about 1869 as the 'Morris Adjustable Back Chair', this was widely copied on the continent and in America. The design was a copy of a vernacular version of a late Georgian arm-chair found at Hurstmonceaux in Sussex. [pre October 2000]
British Galleries:
This design was adapted from a chair seen in a workshop in Sussex in 1866. As with other examples of Webb's early furniture it has an ebonized finish, in line with contemporary artistic tastes. These chairs were still available in 1912, costing £10 guineas (£10.50p) for an example like this, or £8 for those with cheaper printed cotton covers. [27/03/2003] 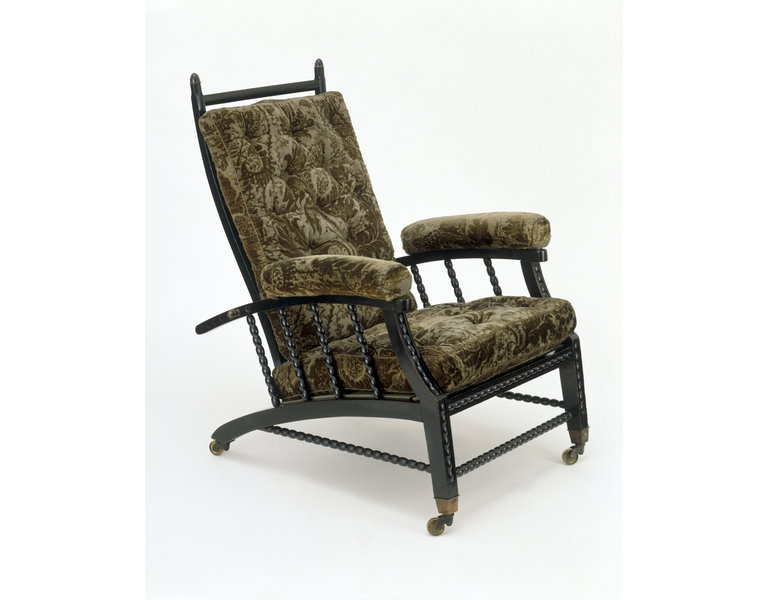