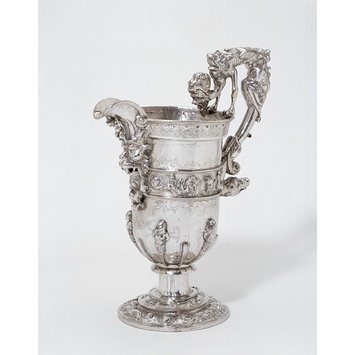 The cylindrical body, prominent, curved, spout and curving handle of this ewer are characteristic of sixteenth and seventeenth-century Spanish jugs, particularly those produced in Seville. However, the winged women, bearded heads enclosed in roundels, and monstrous figures that decorate the body and handle of this example are more characteristic of goldsmiths' work from Cuenca (central Spain). The combination of styles means the ewer has been attributed to Juan Ruiz el Vandalino, asixteenth-century goldsmith who worked in both Cuenca and Seville.
Contemporaries referred to this type of ewer as a 'jarro de pico' (literally 'pointed/spouted jug'). They were commonly used in a domestic setting, either as water jugs at table or, when paired with a basin, as ewers for handwashing.

Cylindrical body with flanged lip engraved with foliage, the body with embossed band with monsters and roundels enclosing heads, curved spout and a handle of human and animal grotesque, stepped base chased with masks.

Ewer, silver, cylindrical body on a low, circular foot, embossed with monsters and roundels enclosing heads, the curved handle in the form of a vomiting monster. Unmarked.

Silver Gallery:
This ewer is an epitome of mannerist design. The embossed and cast ornament is exceptionally inventive. The bands around the foot and the body are composed of masks and medallions between grotesque harpies (monsters) and heads emerging from scrolls. The handle and spout combine different elements to create an apparently chaotic yet in fact cohesive programme: the multi-headed beast of the handle seems to vomit into the ewer while the spout is formed as a fierce monster's head surmounted by a small naked putto urinating over his head. [26/11/2002]
EWER
About 1530

Masks, harpies (birds with female heads) and monsters adorn the base and body of this ewer. A touch of humour is added by the handle in the form of a multi-headed monster that appears to vomit into the ewer when seen from the front or side.

Spain, Toledo or Cuenca
Silver
Given by W.L. Hildburgh FSA 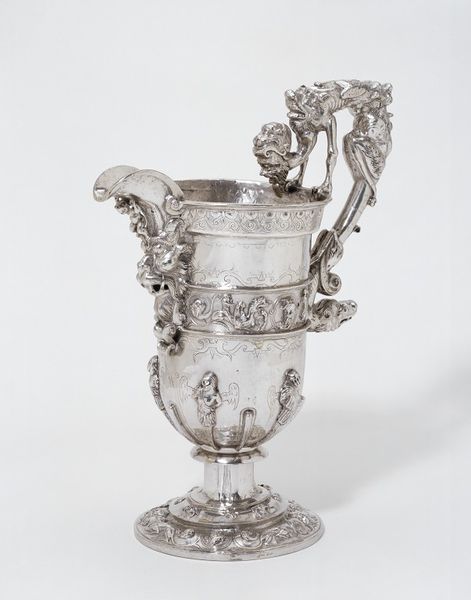