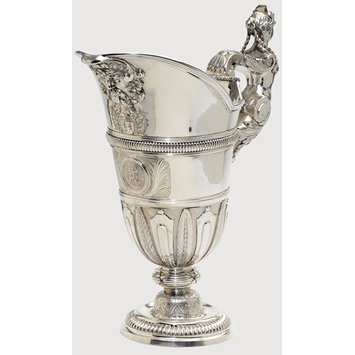 Silver ewer and basin commissioned for John Churchill, 1st Duke of Marlborough, one of Britain's greatest military leaders, for display on his diningroom sideboard at Blenheim Palace and Marlborough House, London

Coat of arms of Scroop Egerton, 1st Duke of Bridgewater and his second wife, Rachel Russell

Anonymous Loan, acquired by private treaty sale through Christie's, London in 2006-7 with assistance from the National Heritage Memorial Fund, The Art Fund, Old Possum's Practical Trust; the Broadley Charitable Trust in memory of Roy Tiley; the Charlotte Bonham-Carter Trust, and the American Friends of the V&A through the generosity of the Paul and Elissa Cahn Foundation and the Audrey Love Charitable Foundation; donations from Simon and Cathlyn Davidson, A.H. and B.C. Whiteley and family and an anonymous donor on behalf of Lola and Gigi Griffith, and further contributions from individuals including the Silver Society and V&A Members.

Historical significance: This presentation silver was made for John Churchill, 1st Duke of Marlborough, one of Britain's greatest military leaders. It provides fascinating evidence for the importance of silver as a status symbol. This ewer and basin are a rare example of leading British patronage of regional French silver in the early 18th century. The goldsmith, Elie Pacot of Lille, worked for other foreign patrons and may also have supplied Marlborough with an elaborate centrepiece for the dining room table as well as a set of silver candlesticks.
The ewer and basin formed part of the sideboard display in the Duke and Duchess of Marlborough's dining rooms at thier London house, Marlborough House, St. James's and his country palace at Blenheim, Oxfordshire

Made for John Churchill, 1st Duke of Marlborough in Lille with matching silver basin(see M.4-2007) for display on the side board in the dining room at Marlborough House, London and Blenheim Palace, Oxfordshire

A silver ewer with matching basin made by Elie Pacot, Lille, 1711-12 for John Churchill, 1st Duke of Marlborough one of Britain's greatest military leaders

Silver Gallery:
The acquisition of all things French, from manners and forms of speech to clothes, silver, paintings and even chefs was a common feature of the 18th-century English aristocracy. This magnificent French ewer and basin is engraved with the arms of Scroop Egerton, 1st Duke of Bridgewater impaling those of his second wife Rachel, daughter of the 2nd Duke of Bedford. It was originally made for John Churchill, the great 1st Duke of Marlborough (1650-1722). Minute traces of Marlborough's arms can be seen beneath those of Bridgewater, evidence that the coat-of-arms on the basin were re-engraved at the time of Bridgewater's second marriage in 1722. The ewer and basin passed into the Bridgewater collections as Egerton's first wife was Elizabeth, the 1st Duke of Marlborough's third and favourite daughter, who died of smallpox in 1714. The engraving is of exceptionally high quality and attributed to Nicholas Garlette of Lille
The ewer and basin are marked for Lille and the goldsmith Élie Pacot.

Marlborough evidently knew Élie Pacot personally. In 1708 Marlborough besieged Lille which was then occupied by the British until 1714. Marlborough often stayed there and in 1712 personally intervened on Pacot's behalf with the town magistrate over a dispute over the professional status of Pacot's goldsmith son-in-law Pierre Tiron. It is probable that the Duke of Marlborough commissioned the ewer and basin directly from Pacot.
The border of the dish is enriched with shells, foliage and classical busts in the style of Louis XIV's court designer Jean Berain. Its scalloped edge made a striking addition to the display on the dining room sideboard. The elaborate engraved cartouche on the basin includes a trophy of arms with weapons, drums and trumpets with banners bearing the cypher AR for Queen Anne, an appropriate feature for a national military hero. The vigorously modelled figurative handle of the ewer also attracted attention. The 'helmet' shape of the ewer is characteristic of later 17th century French silver and ceramics. The sculptural decoration is typical of French silver of this period. [26/11/2002] 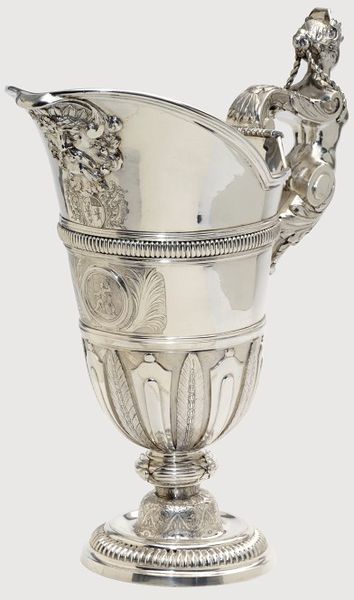