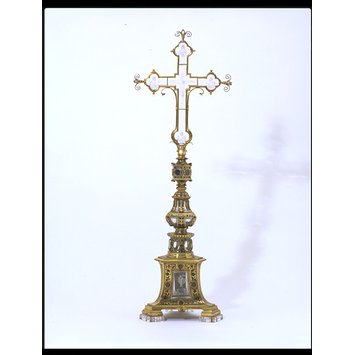 This altar cross, with a pair of altar candlesticks (M.61&a-1920), are some of the most magnificent and sumptuous surviving examples of Italian Renaissance goldsmiths' work. The combination of costly materials such as rock crystal and agate with demanding techniques like translucent enamel was typical of the greatest commissions and a similar dish with the arms of Pope Leo X (in office 1513-1521) is in the Schatzkammer (Treasure House) in Munich. The origin of this set is not known but it was probably made for the private chapel of a cardinal or a Roman patrician family.

The cross is engraved with the crucifix and the symbols of the four evangelists. The panels on the base are engraved with the Entombment of Christ, the Resurrection of Christ and the Harrowing of Hell. The engraving on the crystal is attributed to the Italian artist Valerio Belli (around 1468-1546), a friend of the artists Raphael and Michelangelo, who carried out commissions for two popes.

The set remained together until the early 19th century when it was divided up. The cross was acquired by the museum in 1864 and the candlesticks were given by Leopold de Rothschild in 1920, reuniting the set after nearly a century of separation.

Rome (city) (possibly, made)
Italy (made)

The origin of this set is not confirmed but it was possibly made for the private chapel of a cardinal or a patrician family in Rome. A pamphlet describing the candlesticks and accompanying cross published in Venice in 1820 claims they were made for Francois I of France although ended up in the collection of the Grimani family of Venice. This provenance has not yet been investigated.

All three pieces were in Paris by 1835 when they entered the collection of Louis Debruge-Dumenil (1787-1838). After his death they were sold and later entered the collection of Baron Lionel de Rothschild. The cross was taken apart and parts of it were sold at different times to several dealers including London dealer John Webb who purchased back the majority of the piece and reassembled it with minor additions. It was acquired by Prince Petr Soltikoff and sold at the sale of his collection in 1861. The Museum acquired it in 1864. The candlesticks were given to the Museum in 1920 by Marie de Rothschild, wife of the late Leopold de Rothschild, reuniting the set.

Historical significance: This altar cross and a related pair of altar candlesticks (M.61 and 61a-1920) are considered some of the most magnificent and sumptuous surviving examples of Italian goldsmiths' work from the 16th century. The combination of costly materials such as rock crystal and agate with demanding techniques like translucent enamel and fine engraving was typical of commissions from high profile clients. A similar dish with the arms of Pope Leo X (in office 1513-1521) is in the Schatzkammer (Treasure House) in Munich.

Following biographical information taken from The Grove Dictionary of Art:
The candlesticks and cross are attributed to Valerio Belli (c. 1468-1546), an Italian gem-engraver, goldsmith and medallist. The most important part of his career was spent in Rome, where he worked for Pope Clement VII and his successor Paul III. In Rome Belli was a well-established member of artistic and literary circles, associating, for example, with Michelangelo and the humanist scholar Pietro Bembo. He specialized in cutting gems and crystal and in carving dies for coins and medals. His best-known works are those made for his papal patrons, many consisting of or incorporating carvings in rock crystal or semiprecious stones. No confirmed specimens of his work as a goldsmith survive, but he is called ‘aurifex’ in contemporary documents and may have made the settings for his carved gems.

Italian, 16th century. Made by Valerio Belli for Francis I; Church plate, Continental

ALTAR CROSS AND CANDLESTICKS
Rock-crystal mounted in silver-gilt, enamelled and set with stones
The rock-crystal reliefs show: Christ on the Cross with the four Evangelists, and the Entombment, Christ in Limbo and the Resurrection.
By Valerio Belli (d.1546)
Italian; first quarter of the 16th century
The Cross acquired by purchase
The Candlesticks presented by Mrs Leopold de Rothschild
At the beginning of the nineteenth century the Cross and Candlesticks were in the collection of Guiseppe Panigalli of Venice. Attempts have been made to identify them with a Cross and Candlesticks said to have been commissioned from Valerio Belli for King Francis I of France and with a Cross commissioned by Pope Clement VII. The attribution to Valerio Belli of the rock-crystal plaques can, however, be corroborated from signed works. []

David Gasparetto believes this cross and its accompanying candlesticks (M.61 and 61a-1920) date from about 1515. [see References] 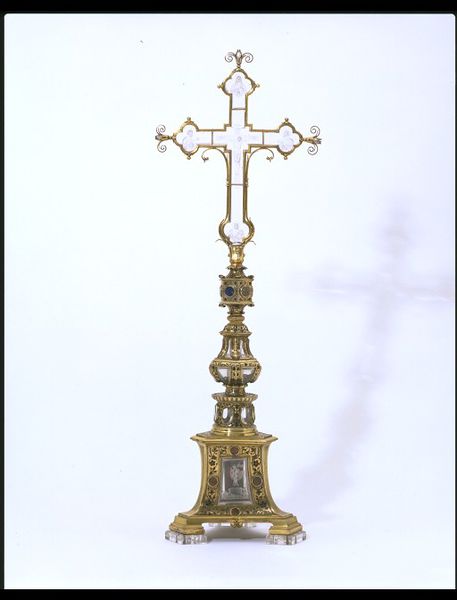