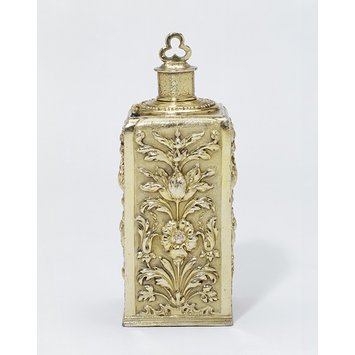 This flask, one of a pair, was almost certainly part of a toilet service. Toilet services comprised items for grooming and breakfasting (such as combs, ointment pots, a mirror, candlesticks and bowls for broth), and the fashion for them originated in France. Flasks like this one are referred to in seventeenth-century inventories as 'ferrières', and held water scented with oranges for handwashing.
The marks on the flasks suggest the complexity of the French marking system and, perhaps, the subterfuges practised by goldsmiths. Both flasks bear the marks of different Paris goldsmiths. The very worn maker's mark on the base of one flask (V&A 806A & C-1892) is probably that of René Delacourt, a Paris goldsmith punished by the French authorities for fraud and pardoned in 1635. Jean Leroy, whose mark appears on the base of the other flask (V&A 806 & B-1892) was recorded in the London borough of Westminster in 1655 and was still resident in the city in the early 1670s. He was a contemporary of a third goldsmith, Geneviève Cabarin, whose mark appears on the sides of both flasks. Cabarin was the widow of the goldsmith Pierre Danet, and she took over his workshop after 1671. The location of these different goldsmiths' marks on the flasks appears to suggest that Cabarin's workshop made the cast side panels and soldered them to bases recycled from works made by the other two goldsmiths. Yet other scenarios are also possible. Cabarin and Leroy were contemporaries living in different cities. Did they know one another? Did Leroy, in fact, import silver made by Cabarin to London and add this to pieces made in his own workshop? This aside, the assay and tax marks struck on the base of both flasks are inconsistent. Both flasks bear a tax mark for 1672-74, which coincides with Cabarin's activity, but the assay letters on the flasks are for different, earlier, dates. If Cabarin did indeed assemble the flasks, this suggests some form of fraudulent activity on her part. Her workshop may have used substandard silver for the cast sides of the flasks and deliberately retained the worn assay marks on the recycled silver bases to make this appear legitimate.

Of square section, with moulded base, and top corners rounded. Each side has a slightly recessed panel cast and chased in bold relief with a low base of auricular ornament from which rises a plant with spreading stems and curling foliage and a single large flower. It is closed by a single screw stopper with floral scrolls and topped by a trefoil handle. The chain that would have secured the stopper to the loop soldered on the shoulder of the flask is missing.

Three marks on the base:
A sceptre and two laurel branches with the initials 'L R' on either side, mark of Jean Leroy (for the identification see Bimbenet-Privat (2002); compare Lightbown (1978) who had suggested Louis Rousseau)
An illegible crowned letter, the 'poinçon de jurande' or mark of the Paris assay office, perhaps a 'Q' (for 1660-61, a 'C' (for 1647) or an 'O' (for 1658) (see Bimbenet-Privat in an e-mail dated 23/12/2013 in object file; cf. Lightbown (1978) who suggests it is a crowned 'C' for the year 1671-72)
The letter 'A' crowned by a closed (imperial) crown and surrounded by three fleurs-de-lys, the 'poinçon de charge' or tax mark for the tax official Vincent Fortier for the years 1672-74.
On the sides:
The letters 'PDN' over the letter 'V', between two pellets and below a bunch of grapes crowned by a fleur-de-lys, the mark of Genèvieve Cabarin, widow of Pierre Danet. This mark stamped once on two sides of the flask. Identified by Bimbenet-Privat (2002).

This flask and another like it, together with a two-handled cup and a broken candelabrum, were dug up by Edward Barrington Haynes, aged three, in July 1892 on Parliament Hill Fields between Hampstead and Highgate. A short report on the find featured in the 'Home and Foreign News' section of the Illustrated London News in August 1892, together with a photograph of the treasure. The flasks have French marks, the cup English ones, but despite this all the pieces probably came from a single toilet service. If so, the set may have been made up by another goldsmith, who obtained some of its pieces from the stock of his colleagues. A pair of Paris perfume flasks of 1670-71, with the mark of Pierre Prévost, with side panels of closely similar design, are now in the Metropolitan Museum (see Dennis: 1960, I, fig. 284J, p. 195).

Perfume flask, with foliate decoration, silver-gilt, marks of Geneviève Cabarin, widow of Pierre Danet and of Jean Leroy, Paris, around 1672.

Silver Gallery:
The embossed panels on this flask are taken from an ornament print and illustrate one of the main stylistic features of baroque design. The flask was almost certainly part of an elaborate toilet service, a most important status symbol in the late 17th century. [26/11/2002] 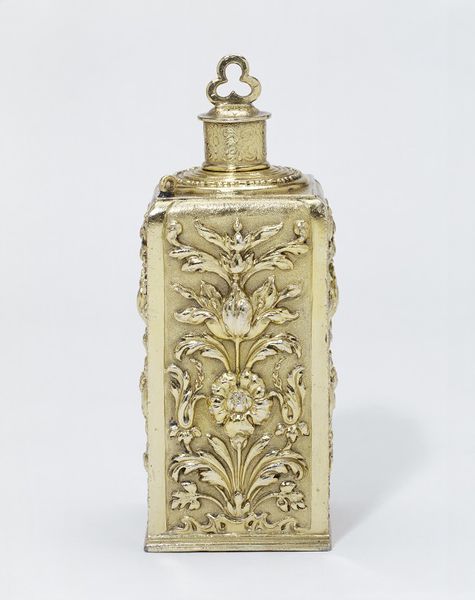