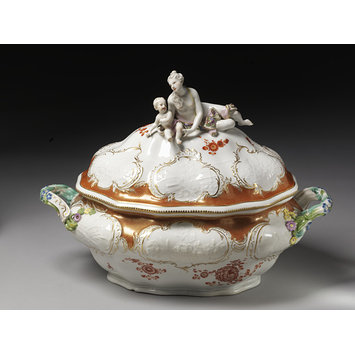 This piece is from a dinner service made at the Meissen porcelain factory in Saxony, Germany, for Frederick the Great of Prussia around 1761. Frederick the Great had visited Meissen several times, placed orders with the factory, received gifts of Meissen porcelain from Augustus III, the Elector of Saxony and King of Poland, and had plans to establish his own rival factory at Berlin before his Prussian forces occupied Saxony for the second time in 1756. Frederick ordered several table services from Meissen during the Prussian occupation of Saxony in the early 1760s. These were intended for his personal use, and he directed and oversaw their design. Artistically this service of 1761, now known as the Möllendorf Service, is the most important.

Many of the tableware shapes and the low relief moulded decoration of the Möllendorf Service were repeated from an earlier service of 1760, which was decorated at Frederick’s order with the same floral cartouches enclosing musical instruments and emblems of war. The handles on the tureen covers of both services were modelled either as Minerva, symbolizing the intelligent conduct of war and wise governance in peacetime, or as nymphs with flowers, fruit, corn or pitchers of wine. This earlier service was in turn inspired by another one, made for Count Bruhl, Prime Minister of Saxony, in 1742. Frederick stipulated in 1761 that his new service should be painted in the combination of the special red enamel and gold reserved at Meissen ‘for the Saxon ruler.’ The design and decoration were therefore in part taken from Saxon court services made for his subdued adversaries, and were politically charged.

The service was begun in 1761, and originally comprised 697 pieces, including 144 dinner plates and 48 soup plates; there were six large oval tureens, six round tureens, and twelve ragout tureens each with an under-dish and cover. Dessert plates and possibly also the multi-part plat de ménage (centrepiece with lemon baskets and cruets) were added in 1763. In 1781 Frederick gave the service to General Wichard von Möllendorf, and as a consequence it is now generally known as the Möllendorf Service.

Tureen and cover of hard-paste porcelain, part of a dinner service. Oval. Lacking under-dish. Cover finial modelled as a reclining nymph with a child. Two handles in the form of twisted stems and flowers, painted in colours. Decorated both on the cover and on the sides in low relief with six panels containing trophies of musical instruments, a torch, a fascis, a globe and a book, and sprays of flowers, within gilt-rococo borders, the interspaces partly filled with scale-pattern in orange and gold; below and above, sprays of flowers in deep orange-red and gold.

Hard-paste porcelain with moulded and applied decoration, painted in enamels and gilt

Tureen and cover, part of a dinner service (Möllendorf service), hard-paste porcelain with moulded and applied decoration, painted in enamels and gilt, designed by Karl Jacob Christian Klipfel and Frederick the Great, made by the Meissen porcelain factory, Germany, ca. 1761

Meissen Service for Frederick the Great

This dinner service originally comprised over 685 pieces, each with matching decoration as in a modern table service. The set illustrates how dining habits changed in the 18th century. It is made of porcelain, which increasingly replaced silver at grand meals. It features tureens for the new, fashionable soups French chefs had introduced, and grand centrepieces made for condiments. These would have dominated the table.

Part dinner service
Tureen for soup or ragout
About 1761–63

The fashion for soups and ragouts was part of a revolution in cooking. This began in France, where cooks gave herbs and aromatic vegetables the flavouring role previously played by spices.

Germany (Dresden)
Made at the Meissen factory
Made for and under the direction of Frederick the Great, King of Prussia, and modelled by Johann Joachim Kändler
Porcelain painted in enamels and gilded
Purchased with funds from the Captain H.B. Murray Bequest
[09/12/2015] 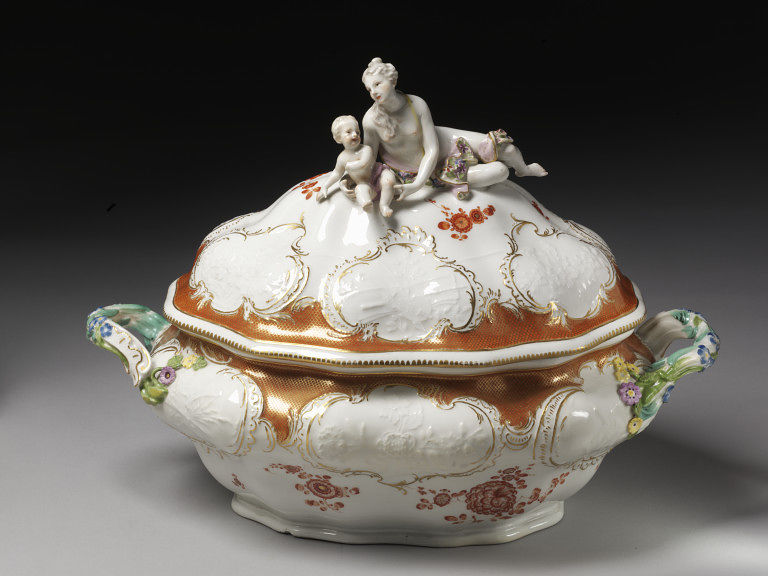