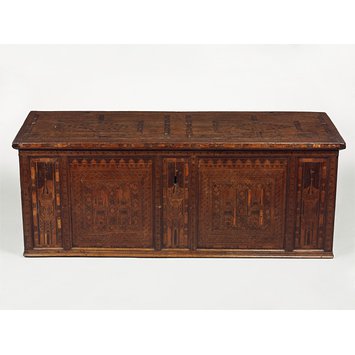 This type of chest is characterised by its construction using dovetailed boards and decoration of geometrical and architectural designs in marquetry and inlay. In many respects they resemble chests made in Germany, and are now thought to have been made in London, particularly Southwark, by immigrants from northern Germany and the Netherlands from about 1560. Their decoration of picturesque towered buildings probably derive from 16th-century printed designs, such as those published by Hans Vredeman de Vries (1527-1604). During the twentieth century they came to be known as ’Nonsuch’ chests, after Henry VIII’s palace of Nonsuch in Surrey, because their decoration of fanciful buildings was thought, wrongly, to represent that building.

The chest was in the collection of Sir Aston Webb (1849-1930) the distinguished architect, whose commissions included the main facade of the Victoria & Albert Museum.

This chest was illustrated in A History of English Furniture Vol. I, 'The Age of Oak' by Percy MacQuoid (London, 1904, Fig. 103). as 'the Property of Sir Aston Webb', but it is not known when or where he acquired it. His son, Maurice E.Webb, thought fit to give it to the museum on the death of his father, as he wrote to Sir Eric Maclagan: '... my sister and I would like to see it there now instead of waiting until we die' (ref. Nominal File: R.G.Webb Bequest).

Historical significance: The chest is a good example of dovetailed furniture with inlaid and marquetry decoration, produced in England by specialist inlayers, working in London, particularly Southwark, who mostly came over from Germany and the Netherlands from about 1580. Chests with this decoration were long thought to have been inspired by Henry VIII's palace at Nonsuch, Surrey. More recent research has noted similarities between this type of decoration and examples made in Germany, particularly near Cologne, at about this time. These pieces were often decorated with archtitectural fantasies, inspired by published collections of engravings such as Variae archiecturae formae published by Hans Vredeman de Vries (1527-1604), rather than Nonsuch Palace. Whole runs of inlay were probably made by independent specialists, and could be applied to oak chests, made separately by a joiner. As Edmund Maria Bolton tells us in Elements of Armories (1610): 'At St. Olaves in Southwark, you shall learn, among the joyenrs what Inlayes and Marquetrie meane. Inlaye ... is a laying of colour'd wood in their Wainscot works, Bedsteads, Cupbords, Chayres and the like'.

The chest was in the collection of Sir Aston Webb (1849-1930), the distinguished architect, whose commissions included the Victoria & Albert Museum, the Admiralty Arch and façade of Buckingham Palace. It is an interesting example of his collecting, and also of a widespread taste for all things Elizabethan by the end of the nineteenth century. As stated by Sir Eric Maclagan, the then director, this chest had become 'a very well known piece', and one thought a fitting bequest to the museum that he had designed.

MacQuoid, Percy. A History of English Furniture. London: Lawrence & Bullen Ltd., 1904. Vol. I, 'The Age of Oak'. Fig. 103, pp.125-127
'Fig. 103 is a large chest almost six feet in length, with this same interesting decoration as Plate VIII., and probably by the same hand. The front is divided into five panels, those narrow and upright being inlaid with the lantern-topped turrets of Nonesuch in light wood on a dark oak ground, the windows of the turrets being represented in the darker wood; these are bordered with a wide bead and spindle inlay, and framed in stiles of the finer checker-work marqueterie, found between 1580 and 1600. The two large panels are filled with a repeated representation of the central portions of the house set in elaborate borders of checker-work. Along the top, and treated as a frieze, run the dormer windows, which in Hoefnagle’s drawing surround the tops of the towers. The colour of the oak forming the construction of the chest is light; the top and sides are decorated with borders of inlay checker-work, and possess the original handles. On opening the lid, the original tinned hinges can also be seen, and a small hanging box on each side, faced with marqueterie. '
Clifford Smith, H. Catalogue of English Furniture and Woodwork. London: Board of Education, 1929. Vol. 11. p. 16.
Forman, Benno. Continental Furniture Craftsmen in London: 1511 - 1625. Furniture History. 1971. Vol. VII, pp. 94 - 120.
G. Bernard Hughes, 'Chests for plate and for blankets' in Country Life, Oct. 8, 1964, pp. 934-7, plate 3
W.A. Thorpe, “The Great Bed of Ware and Harry Fanshawe” in Country Life, August 15, 1941, pp.286-290, fig. 11

Given by the late Sir Aston Webb. [pre October 2000]
Treasures of the Royal Courts: Tudors, Stuarts and the Russian Tsars label text:

This German-influenced chest was a radical departure
from traditional English furniture. The elaborate
geometric inlay and pictorial marquetry – originally
much more colourful – required new skills. Decoration
like this was long thought to have been inspired by
Henry VIII’s Nonsuch Palace but is actually based
on printed designs from Europe. The decoration
conceals an innovative dovetailed construction.

The decoration may have been influenced by the published engraved ornamental designs of Vredeman de Vries. 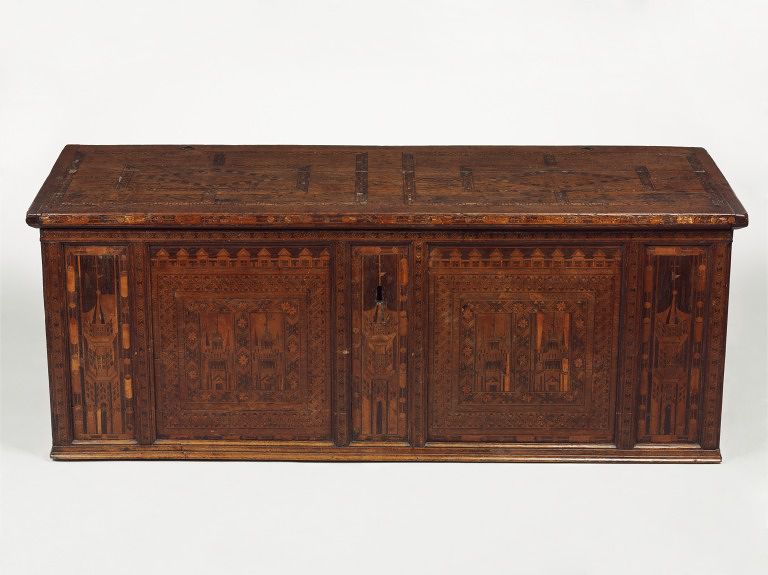