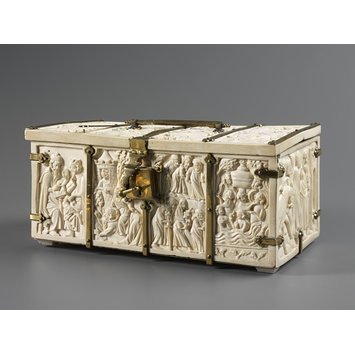 This splendid ivory casket is carved with scenes from romances and allegorical literature representing the courtly ideals of love and heroism. In the center of the lid, knights joust as ladies watch from the balcony; to the left, knights lay siege to the Castle of Love, the subject of an allegorical battle. The remaining scenes on the casket are drawn from well-known stories about Aristotle and Phyllis, Tristan and Iseult, and tales of the gallant, heroic deeds of Gawain, Galahad, and Lancelot. The box may originally have been a courtship gift.
This casket belongs to a group (comprised of six complete examples and numerous fragments) of early fourteenth-century French work which depict a variety of scenes drawn from romance, allegory and satire. The group are among the chief examples of the style attributed to Paris, which also includes a casket in the Metropolitan Museum (17.190.173) and another in the Walters Art Museum (71.265).

Ivory casket depicting scenes from romance literature, composed of six ivory panels held together with later brass mounts: on the lid is the attack on the Castle of Love with, to the left, a knight entering the castle by a ladder; on the right ladies hurl roses at the knights below who use siege engines to throw up baskets of flowers; in the centre is the Tourney watched by lovers on a balcony above; the God of Love, standing on the balcony, shoots arrows at the besiegers on the left. On the front are Aristotle and Alexander and Phyllis riding Aristotle watched by Alexander, aged figures approaching the Fountain of Youth and the Fountain with its rejuvenated bathers.
On the right-hand end, Galahad receiving from the ancient guardian the keys of the castle in which are the captive maidens. On the back, Gawain and the lion; Lancelot crossing the bridge of swords; Gawain on th magic bed and the ladies delivered from the enchanted castle. On left-hand end Tristram and Iseult, watched by king Mark, and the unicorn killed by the hunter while taking refuge with the maiden.

Historical significance: This coffret illustrated with scenes from Arthurian and other courtly literature of the Middle Ages is one of the most imposing examples to survive.

This casket belongs to a group (comprised of six complete examples and numerous fragments) of early fourteenth-century French work which depict a variety of scenes drawn from romance, allegory and satire. The group are among the chief examples of the style attributed to Paris, which also includes a casket in the Metropolitan Museum (17.190.173) and another in the Walters Art Museum (71.265). Loomis notes that the costume and armour on these caskets all indicate the period 1300-1340. Koechlin dates all except two of the group to the first half of the fourteenth century and Ross describes the present casket as appearing to represent the oldest surviving type of these caskets on the grounds that the carving of the lid is the most primitive. Dalton notes that these caskets represent the height of the didactic tendency of fourteenth century carving, with beauty used as a means to convey a story and a moral. the stories represented on the present casket (explored thoroughly by Dalton and Ross) are as follows:

The lid follows a convention of division into four sections and depicts a tournament and the Attack on the Castle of Love. The idea of the defence of feminine chastity resembling that of a tower or castle was a popular medieval similie, with the subject also appearing on mirror cases. No literary source has been established for this scene although the Roman de la Rose has been suggested. Ross points out that in the Roman de la Rose, it is not the not the Castle of Love which is under siege and that there is no resemblance between the iconography of the Roman de la Rose in manuscripts and that of ivory carving.

On the front of the casket are Aristotle, Alexander and Phyllis who participate in a favourite cautionary tale of the the middle ages. Aristotle warns Alexander that he is neglecting his royal duties in favour of the company of Phyllis, who in revenge seduces Aristotle and rides him, like a horse around an orhard so that Alexander will see. These scenes have sources in the literature of the period, the thirteenth century French "Lai d'Aristote" and the contemporary middle high German version "Aristoteles und Phyllis".
The fountain of Youth was another popular subject for medieval iconographers and occurs in manuscripts, tapestries and goldsmith's work as well as on ivory carvings. It has clear literary sources, being mentioned in several works of medieval vernacular literature. Old people enter the fountain from the left and emerge rejuvenated.

Lancelot on the bridge of the sword: The scene represents Lancelot going to the rescue of Guinevere who has been carried off by Meleagant to the mysterious knigdom of Gorre, whose entrance is by way of a bridge consisting of a sword blade. Ross suggests that this is based on an old Celtic legend of the other world. The inclusion of this scene, which interrupts the sequential development of another Gawain story - that of the Perilous Bed depicted in the three other sections - gives an indication that the sculptors were following a covention rather than working from knowledge of the story.

Gawain and the perilous bed, as told bt Chretien deTroyes in his Perceval runs as follows. The knight arrives at a deserted castle and finds a wonderful bed, all of gold. he lies down, fortunately without removing his armour, for no sooner has he done so than bells attached to the bed ring, shutters fly open and a hail of bolts and arrows descend on Gawain.A lion is then set upon him and Gawain severes its paw. Finally Gawain is congratulated by the lady of the castle, who sends her maidens to honour him. Apart from on caskets, this story occurs on a mirror case in the Museo Civico, Bologna and a writing tablet now in the Museum Niort.

One end of the casket features Tristram and Iseult watched by King Mark and the Unicorn killed while taking refuge with a maiden. The other end shows Galahad receiving the keys to the Castle of the Captive Maidens. 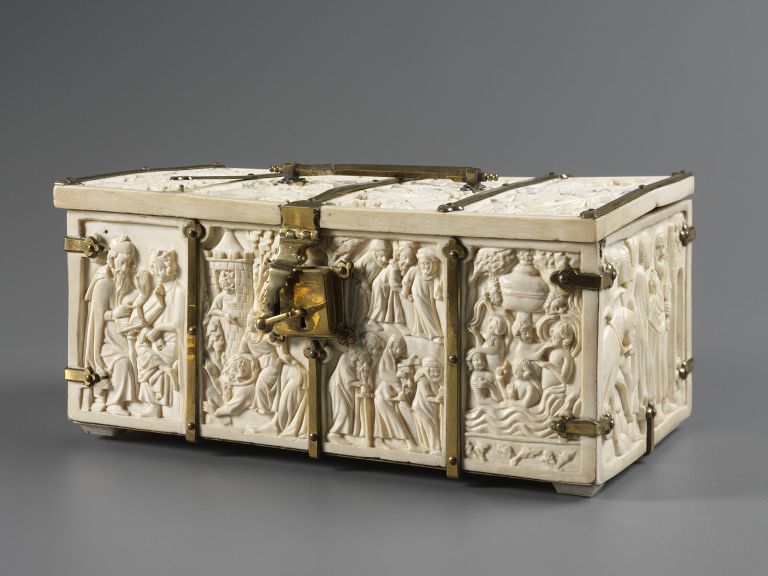