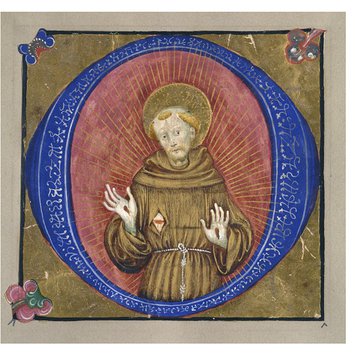 This illuminated initial O contains an image of Saint Francis showing the stigmata, the five wounds of Christ, that he received during a vision in which a seraph, a six-winged angel, appeared to him on a cross. According to the account by Brother Leo, he was praying on Mount Verna during a forty day fast in preparation for Michaelmas when he had the vision.

Medieval books had no contents page or index and so there was usually a hierarchy of initials marking important divisions in the text or music. The most important initials might be historiated with a figurative picture (istoire being the term for a story) or images of saints as seen here, while divisions of lesser importance had decorated initials.

The Master of the Budapest Antiphonary is named after a Franciscan manuscript in the National Library of Budapest (MS Clmae 462) which dates to around 1444-1450. This artist is sometimes confused with the Master of the Franciscan Breviary (named after MS 337 in Biblioteca Universitaria, Bologna), whose career and style overlap.

Cut-out historiated initial O from a choirbook. The initial is blue with mock Arabic lettering on a panel of burnished gold. Inside is St Francis displaying his stigmata surrounded by gold rays. In three of the four corners of the panel are floral decorations, in blue, red, pink and green.

Master of the Franciscan Breviary (illuminator)

Water-based pigments and gold-leaf on parchment

Historical significance: In Italy, illuminated choirbooks and liturgical manuscripts contained the work of a large number of miniature painters. Choirbooks in particular were produced in sets of many volumes (often more than 30). From the early 19th century onwards such choirbooks provided an easy source of images that connoisseurs eagerly sought to add to their collections of paintings. Manuscripts could be cut up to make them more marketable and pleasing to the collector. Single leaves survive, but also initials, as here, cut to shape.

Attributed to the Master of the Franciscan Breviary by Filippo Todini in this catalogue
'Miniature: La Spezia, Murseo Cirico Amedo Lia,' Published 1996. The manuscript is reproduced on page 51.]

Historiated initial O from a choirbook, St. Francis displaying stigmata, attributed to the Master of the Franciscan Breviary; Italy; ca.1450.

ST FRANCIS DISPLAYING THE STIGMATA
About 1450

St Francis received the stigmata (the five
wounds of Christ) during a vision in which
a seraph or six-winged angel appeared to
him on a cross. He was praying on Mount
Verna during a 40-day fast when he had
the vision.

Attributed to the Master of the Budapest Antiphonary by Levi d'Ancona in a manuscript note on the mount.

Attributed to the Master of the Francisan Breviary by Filippo Todini in his catalogue 'Miniature: La Spezia, Museo Civico Amedo Lia'; published 1996. The manuscript is reproduced on page 51.

Anna Melograni dates the cutting to ca 1450 and attribution place to Lombardy. 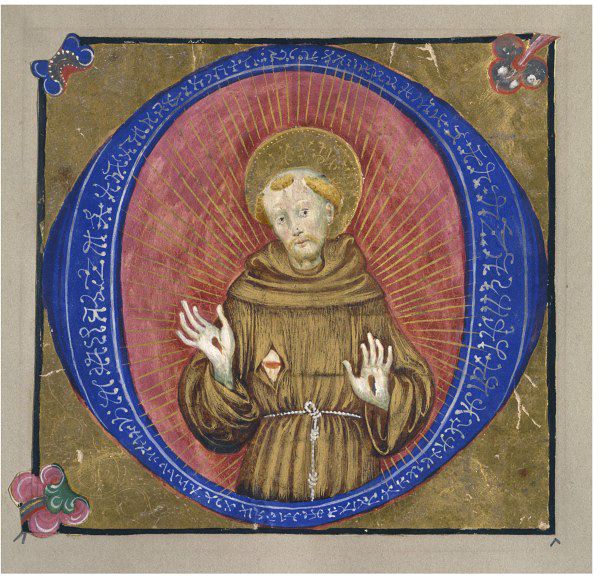