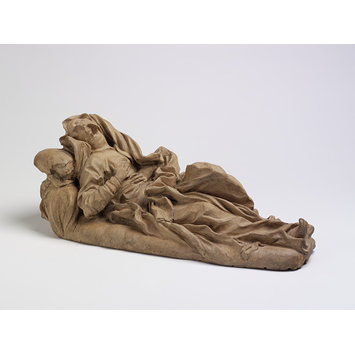 This terracotta is a sketch-model for a marble sculpture of the Franciscan nun Ludovica Albertoni in the Altieri chapel in the church of San Francesco a Ripa in Rome. The decoration of the chapel was commissioned from Lorenzo Bernini by Cardinal Paluzzi degli Albertoni in 1671. Despite losses of the face and of the pillow, the terracotta is one of the most significant of Bernini's late models. Unlike his other known bozzetti (sketch-models), the back has been modelled. This is an unnecessary detail in view of the position of the finished work in the chapel. The rounded working of the figure and the delicate rendering of the face suggest that it may have functioned both as a presentation piece for the patron and as a working model for the artist himself. Unlike many of his other compositions, which were carved by his assistants, Bernini executed the marble largely himself, and he undertook the work for no payment.

The treatment of the figure is reminiscent of one of Bernini's most famous and much earlier works, the Ecstacy of St Theresa in the Cornaro Chapel in the church of Santa Maria della Vittoria, Rome. The vibrant movement in the folds of drapery and the placement of her hands, the right one pressed into her breast, focus the viewer on Ludovica's mystical union with God. This dramatic and sensual depiction of spiritual ecstacy encapsulates the baroque style.

Born in 1473, the noblewoman-turned-nun Ludovica Albertoni was renowned for her charitable works. She died of a fever in 1533 while tending the sick. Cardinal Albertoni was a descendent of her family. He had been adopted as cardinal-nephew in 1670 by Clement X Altieri, the pope's niece having married into the cardinal's family. When the pope sanctioned the cult of the Blessed Ludovica Albertoni in January 1671, the cardinal commissioned the refurbishment of the chapel where his holy ancestor was buried. He thereby celebrated both the papal family and his own.

It shows the Blessed expiring from a fever contracted while ministering to the sick.

Probably by descent through the Altieri family in Rome to Principessa Christina Altieri (d. 1930); Theodoli-Bruschi family, Bologna; Heim Gallery, London; purchased by the V&A, 1980 for £78,000

This is a sketch model (or bozzetto) for a monument in the Altieri Chapel in San Francesco a Ripa, Rome. It depicts Ludovica Albertoni, a fifteenth century noblewoman who became a nun and died of a fever while tending to the sick. 1671, after Pope Clement X blessed the cult which grew up around Ludovica, Cardinal Paluzzo degli Altieri commissioned a tomb and chapel from Bernini. The statute shows her during an ecstatic and virtuous death
[1993 - 2011] 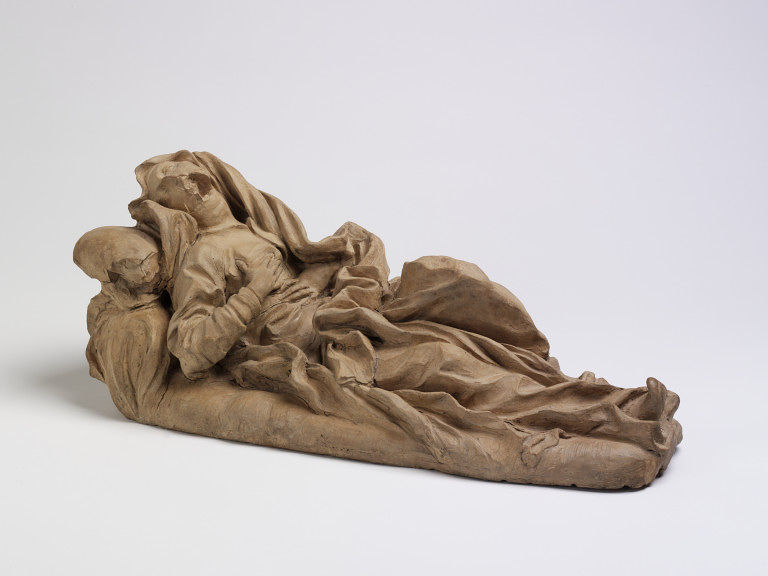