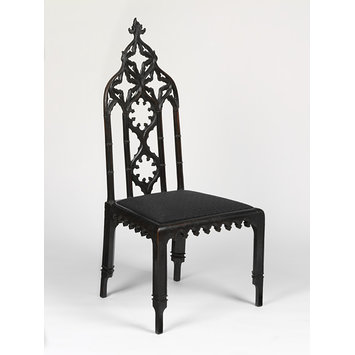 Object Type
This chair was designed for Horace Walpole by his friend, the designer Richard Bentley. Walpole asked Bentley to design a chair with a back like the outline of a Gothic window, and which would be very lightweight, painted black, with a rush seat. The chair was made by the fashionable London cabinet-maker William Hallett.

People
Horace Walpole (1717-1797), the antiquarian, collector and novelist, was the son of Sir Robert Walpole, the first British Prime Minister. He collected antique furniture but also commissioned new furniture for his own use. He opened his house to visitors and became one of the best-known exponents of the Gothic Revival style.

Place
Eight of these chairs were made to furnish the Great Parlour at Horace Walpole's country residence, Strawberry Hill, in Twickenham. Walpole devoted much time to modifying his house in the Gothic Revival style. To advise him, he convened a 'Committee on Taste' including the designer Richard Bentley and the amateur architect, John Chute.

Time
The Gothic Revival style was fashionable in the 1750s and 1760s, mainly for the decoration of interiors. Horace Walpole was unusual in that he remodelled his entire house in the Gothic style, relying on his own observations of Gothic churches and engravings of Medieval architecture, rather than on contemporary pattern books.

The chair is painted black to imitate ebony. It has a back in the form of a gothic window, and has a drop-in seat with a black horsehair top cover. The seat rails have gothic trefoil mouldings beneath them and the legs are tapered at the bottom. The cross-shaped finial carved in the shape of leaves, which is present on others in the set, is missing from this example

This chair was one of the furnishings of Strawberry Hill, Twickenham, the country house of Horace Walpole. Walpole, the antiquarian, collector and novelist, and the son of Sir Robert Walpole, the first Prime Minister, devoted much time to modifying and enlarging Strawberry Hill in the Gothic Revival Style from 1748 onwards. He furnished the house with his collections of antique furniture and with new commissions. In order to advise him on the transformation of the house, Walpole convened what he termed a 'Committee on Taste' comprising himself, the designer Richard Bentley, and the amateur architect and owner of The Vyne, Hampshire, John Chute, whom Walpole had met on his Grand Tour. Chute, described by Walpole as '...my oracle in taste...the genius that presided over poor Strawberry!', was resposibile for the exterior of the building, while Bentley produced designs for interior fittings based on engravings of ecclesiastical details which appeared in topographical books in Walpole's own library.

Bentley produced the design for this chair, which was one a set of eight made for the Great Parlour, en suite with two mirrors that hung to either side of the window. Walpole suggested that they should be based on the outline and tracery of a Gothic window. He wrote to Bentley on 27 July 1754: 'My idea is, a black back, higher, but not much higher that common chairs, and extremely light, with matted bottoms...I have been trying to make out something like windows...I would have only a sort of black sticks pierced through...' Walpole ordered the chairs from William Hallett, a fashionable cabinet-maker in St Martin's Lane, London, noting the details in his account book: '1755 Sept. 20 pd Hallett fr 8 black Gothic chairs at 3-15-0, 30-00-0.'

Sold from Strawberry Hill 1842, by Mr George Robins, on behalf of the Earl of Waldergrave, day 19, lot 49 or lot 52, bought Piggott. Richmond. Lot 49 was described as 'TWO MOST BEAUTIFULLY CARVED CHAIRS, ebonized, the backs of the true Gothic order, very elaborately and delicately carved, black frames and seats of embossed work'. Lots 50-52 were simply marked as 'DITTO'.

Four chairs from this set are in the collections of The Lewis Walpole Library, Farmington, Conn. USA. Of the eight sold in 1842, four were purchased by Pggott and four (Lots 50 and 51) by the Earl of Charleville, Charleville Forest, near Tullamore. Two of the latter four were llater gilded, and then passed to the Lewis Walpole Library. Two were owned by the London dealer Christopher Gibbs in 1987.

Shown at Strawberry Hill for the exhibition 'Lost Treasures of Strawberry Hill: Masterpieces from Horace Walpole's Collection', 20 October 2018 - 24 February 2019. See below for reference to catalogue.

Historical significance: The chair is significant as one of the original furnishing of Strawberry Hill, which has a prominent place in the history of the Gothic Revival in the eighteenth century, partly owing to Walpole's talent for self-publicity. With an eye to posterity he left detailed descriptions of his work at Strawberry Hill in the form of accounts, letters and even a published guide. He welcomed curious visitors to the house. In choosing to take his inspiration for his house and furnishings from the Gothic features found in medieval churches, Walpole was subscribing to an already popular contemporary fashion. He was unusual, however, in that he remodelled his entire house in the Gothic Revivial style, rather simply one or two rooms, and that he looked directly at published engravings of medieval architecture as source material, rather than relying on contemporary pattern books. He became one of the best-known exponents of the style in the eighteenth century.

When acquired by the Museum, this chair had a replacement drop-in seat, which was replaced by the Museum in 1980 with a drop-in rush seat, but following new research for the British Galleries Project in 2001, the seat was replaced with one upholstered in black horsehair which appears to be closer to its appearance in early illustrations of Strawberry Hill.

Gothic revival chair, the back based upon gothic window tracery. English (London), 1755. Made by William Hallett to a design by Horace Walpole and Richard Bentley, for Strawberry Hill.

CHAIR, ENGLISH; about 1754. Ebonised beechwood, orignally fitted with a rush seat. One of a set of eight chairs from Horace Walpole's Great Parlour at Strawberry Hill, Twickenham.. In July 1754 Walpole planned the design of some chairs, the backs of which were taller than usual and were based on Gothic window frames. The chair was designed by Richard Bentley and supplied by the cabinet-maker William Hallett, who charged £3.15.0 for each of them in September 1755. The set was sold at the Strawberry Hill sale in 1842. Four of the chairs are now in the Lewis Walpole Library at Farmington, Connecticut. (John Hardy) [1979]
CHAIR
ENGLISH; about 1754
Ebonised beechwood with a rush seat

One of a set of eight chairs from Horace Walpole's Great parlour at Strawberry Hill, Twickenham. In July 1754, Walpole planned the design of some chairs, the backs of which were taller than usual and were based on Gothic window frames. The chair was designed by Richard Bentley and supplied by the cabinet-maker William Hallett, who charge £3.15.0 for each of them in September 1755.

The set was sold at the Strawberry Hill sale in 1842. Four of the chairs are now in the Lewis Walpole Library at Farmington, Connecticut

Purchased by the Brigadier Clark Fund through the National Art-Collections Fund. [pre October 2000] 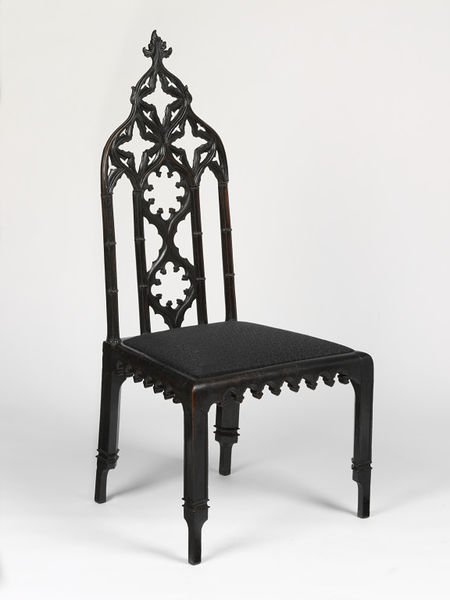