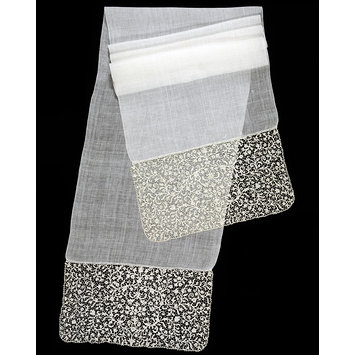 Lace was among the most highly prized and expensive of all textiles in the 17th century. From the main centres of production in Italy and Flanders it was traded widely across Europe, and the industry responded quickly to changes in fashionable dress, as different styles came in and out of favour. In the 1660s, Venetian needle lace became the most fashionable lace, dominating the upper end of the market for both men’s and women’s dress.

Boldly-patterned three-dimensional lace remained popular until the end of the seventeenth century, but in Venice the technique was used for needle lace in a variety of scales, some of exceptional delicacy and elaboration. All shared a common style of branching, curving stems with exotic leaves and flowers. A flat type of needle lace was also made in Venice, which developed in response to changes in fashionable dress and the success of French needle lace. This is the type used for this cravat.

Cravat of muslin with needle lace ends. One edge of the muslin is a selvedge, with the other rolled and sewn with very fine stitching. There is a plaited bobbin lace footing at each end of the muslin, to which the cravat ends are attached. These are of flat Venetian needle lace in a design of flower heads and scrolling stems around a central axis. The design is mostly symmetrical to either side but slight variations suggest some minor and otherwise unnoticeable repairs have taken place. Picot edging to the lace.
There are several tiny beautifully executed darns in the muslin, in particular at one end just above the lace.

The donor Margaret Simeon, was a textile designer who collected historical textiles that she found of interest, particularly lace, throughout her life. this cravat is illustrated in her book A History of Lace (1979), plate 44.

Needle lace had continued to be made in Italy through the years of the mid 17th century when Flemish bobbin lace dominated fashion. During the 1660s, under the influence of French fashion and the taste of Louis XIV and his Court, Venetian needle lace took over as the most fashionable style. Venetian lace makers transformed needle lace into a three dimensional fabric in keeping with the baroque style of the later seventeenth century, a style based on mass and movement, and bold motifs. The patronage of the Catholic church was also crucial to the rapid expansion of the industry. The Italian lace makers had elaborated the part lace technique, so could split large baroque designs into sections, and produce large-scale items like dress flounces, church vestments and furnishings. They used a careful balance of solid form against space, with density broken up by filling stitches, and flat surfaces relieved with three-dimensional detailing. The fashion items on which Venetian lace was shown to best advantage were wide collars for women, and bib-fronted bands for men. These bands, displaying scrolling baroque designs in mirror image, were worn by men of fashion throughout Europe between 1660 and 1680.

Boldly-patterned three-dimensional lace remained popular until the end of the seventeenth century, but in Venice the technique was used for needle lace in a variety of scales, some of exceptional delicacy and elaboration. All shared a common style of branching, curving stems with exotic leaves and flowers. A flat type of needle lace was also made in Venice, which developed in response to changes in fashionable dress and the success of French needle lace. This is the type used for this cravat or neckcloth.

From Randle Holme's Academy of Armory and Blazon (1688) : 'A cravatte is another kind of ornament for the neck being nothing else but a long towel put about the collar, and so tied before with a bow knott; this is the original of all such wearings, but now by the art and inventions of the seamsters, there is so many new ways of making them, that it would be a task to name, much more to describe them'.

The long lace cravat moved with fashion to become a plainer neckcloth, a change perhaps accelerated by the influence of military dress during the French war of 1689-97 (Hart p.21). It was simple to wear, being a long narrow piece of linen or muslin tied just once about the neck in a loose knot, with lace or fringed ends.

Muslin, imported into Europe by the East India Companies, became hugely fashionable for neckcloths in the 1690s. Imports into London increased from '2557 neckcloths @ 4 shillings' in 1697 to to 20495 in 1698. (Hart p.25) Wardrobe accounts for William III show that 42 yards of superfine muslin was purchased to make 24 cravats for mourning for the late Electoral Prince of Bavaria, allowing about 1¾ yards (169 cm) per cravat. 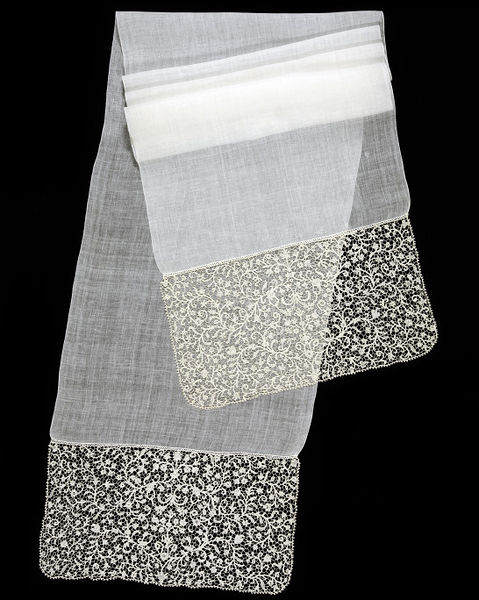