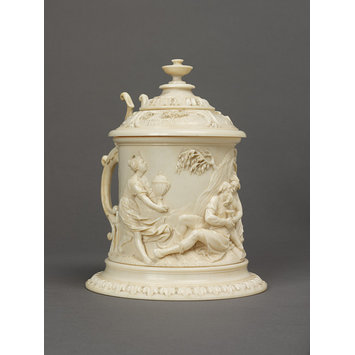 Lot and his Daughters

This tankard is made by Balthasar Griessmann in ca. 1660-70. The relief scenes on the drum of the tankard show Lot and his daughters, who have fled the burning cities of Sodom and Gomorrha (Genesis 19, verses 30-38). Lot's wife, stands, her left arm outstretched, in loose drapery and a headdress, with one breast exposed, turning into a pillar of salt. One daughter with windswept drapery, walks forward, hunched over a vessel, presumably filled with wine, while the other cradles the reclining Lot in her arms, the two of them holding a cup. Landscape details include finely-carved bulrushes, a pair of ducks, and a tree with a hollow trunk. On a small rock near the tree is the signature 'BG', for Balthasar Griessmann. The drum is separate from the lid and base. Three oval reliefs of pastoral scenes, and a fourth depicting buildings, are set around the circumference of the lid. The tankard is surmounted by a decorative knop, which has been turned separately in two parts. Foliate carvings adorn the lid, base and handle. The handle and hinge are made entirely of ivory, a feature typical of Griessmann. The lid, drum and base were all initially turned, and then carved, with the exception of the knop which seems to be turned, rather than carved.

For many years Griessmann (ca. 1620-1706) was known only as the Monogrammist B.G. In recent years his identity has been established by Franz Wagner, who established from documentary sources that Griessmann worked in Vienna and Salzburg, concentrating on ivory vessels and dishes, although he also worked in stone and horn. Many of his ivory relief depend from South Netherlandish engraved sources, and have a distinctive figural style, crowed with small figures, often with windswept hair, and charming genre details. He may have trained in the Netherlands.

A continuous frieze showing Lot sitting with his wife and their two daughters, one of whom carries a chalice in an outdoors setting. On the cover are depicted buildings, trees, a man carrying a pack on his back, a dog crossing a bridge and a mill complete with a mill and water race. 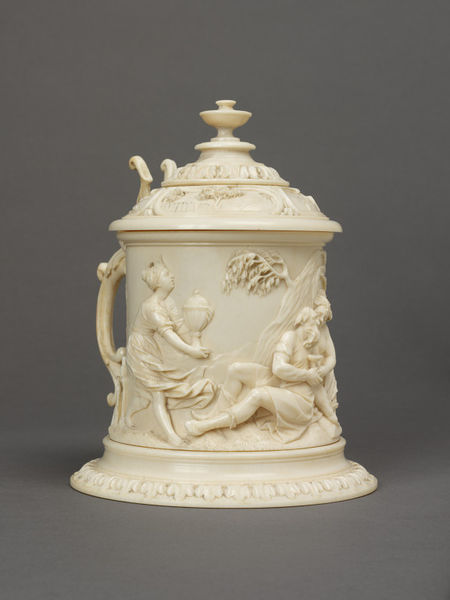