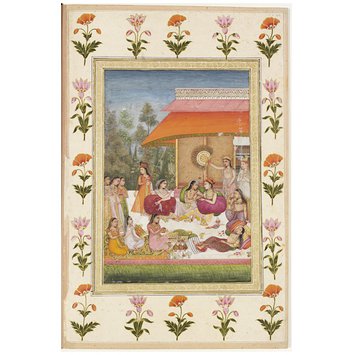 The painting, in opaque watercolour and gold on paper, shows a group of ladies and their female attendants at leisure under an orange awning fixed to a pavilion on a terrace within a garden setting with trees in the background and grass in front. The two central ladies exchange loving glances with the one on the right, who wears a loosely wound turban gently lifting the chin of the lady seated next to her, who, in her turn, has placed her arm round the other's shoulder. This couple is surrounded by other ladies either sniffing flowers, sleeping or fanning them, or merely acting as bystanders. Two further women kneel in the lower left hand corner on a carpet playing a drum while the other sings with a pose of rhythmic hand clapping. A third woman next to them prepares a plate of fruit from the pile laid in front of her together with a number of glass wine bottles and other vessels. At first glance the scene appears to be one of an amorous prince and his lady, but the rounded breasts which can be clearly seen through the transparent clothing make it plain that the couple are both ladies.
The terrace on which the ladies are disporting themselves is raised above a low pink revetment decorated with a row of inverted palmettes. A patterned white floor spread covers the floor with the three attendant figures in the foreground on the left being seated on a rug with a green field and orange border ornamented with gold and coloured floral scrolls and motifs.
The rustic pavilion on the right is also raised on a shallow pink base. It is constructed of what may be representation of bundles of yellow bamboo canes lashed together as upright supports with two wall panels in between. These are made of grass or reeds flecked with green leaves and bound in red bands, which are also seen bound in with the upright supports. A doorway is seen on the extreme right hand side, covered by a lowered chick, constructed of what appears to be horizontal bands of multi-coloured reeds bound in a herringbone braid at the edge. A white fabric blind is rolled up above it. The pavilion has a broad pink slanting eaves below a white parapet which is decorated with multi-coloured floral motifs.
A variety of female costumes are evident in the painting. The sleeping lady and the one immediately above her on the right are both wearing short-sleeved cholis which have truncated bodices which reveal the lower parts of their breasts and midriffs, below which they are wearing what appear to be skirts made of a filmy fabric tucked around their legs. The sleeping lady is wearing pearl earrings and necklaces as well as heavy gold jewellery, including flanged golden anklets. Her companion above, who is sniffing a rose, has what are probably yellow cast marks on her forehead. A similarly dressed female is seen on the left side of the painting in the group of three standing ladies, supporting the central one on her left hand side. She, too, appears to have a yellow mark on her forehead. This may indicate that these three women are Hindus. All the remaining ladies are wearing peshwaz and transparent dupattas over their long loose hair. The three attendant women standing behind the principal ladies all wear hats: she, on the right, wears a chagatai hat, the woman with a peacock-feathered fan, a hat with a divided upstanding brim, and the one on the left, a cylindrical orange cap with an upstanding black tassel on the front.
The painting is framed with strips of cream-coloured paper ornamented with a stylised floral scroll between gold lines and white outlines either side, together with black ink rulings. A further outer blue line has been rules on the outer edge on the main border which is of an ivory colour and decorated with a row of alternate pink lilies and red poppies outlined and detailed in gold. The margins of the page have strips of beige-coloured paper with an inner white line pasted to them. That on the inner left hand side has been abraded and a strip of pale brown paper added to act as a gutter for the album binding.

This miniature painting is part of the Small Clive Album of Indian miniatures which is thought to have been given by Shuja ud-Daula, the Nawab of Avadh, to Lord Clive during his last visit to India in 1765-67. It contains 56 leaves on which are Mughal miniature paintings, drawing and flower studies on both sides. The binding is covered with an Indian brocade silk that may have been cut from lengths brought home by the 2nd Lord Clive, who served as Governor of Madras, 1799 to 1803. The album was sold from Powis Castle at Sotheby's sale, 16 to 18 January 1956, lot 332A. 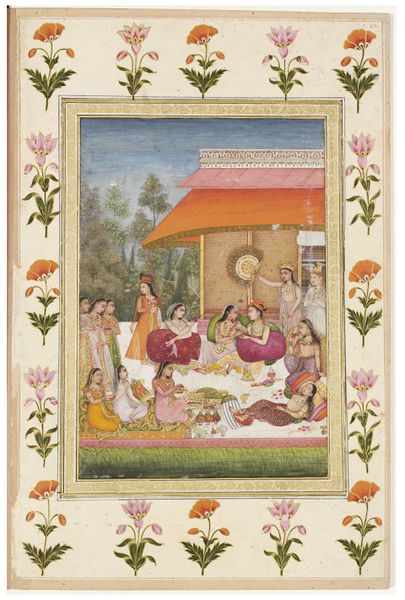